No one was surprised when the U.S. Senate recently passed a bill to approve the Keystone XL pipeline, and though a new video featuring Julie Louis-Dreyfus urges all to sign the NRDC (Natural Resources Defense Council) petition advising Obama to veto the pipeline, which he will likely do, sooner or later the black snake from Alberta will penetrate the heartland of the U.S. and pipe will be laid.

It is said, "When the snake spirit animal shows up, pay attention to how you use your energy, and where you draw it from."

The sinister serpent will cross many paths as it winds its way down from Canada, cleaving it's southern path, invading the expansive pristine wilderness of North American... well, maybe not exactly pristine since there's already about 2.6 million miles of oil and gas pipelines throbbing just beneath our feet. 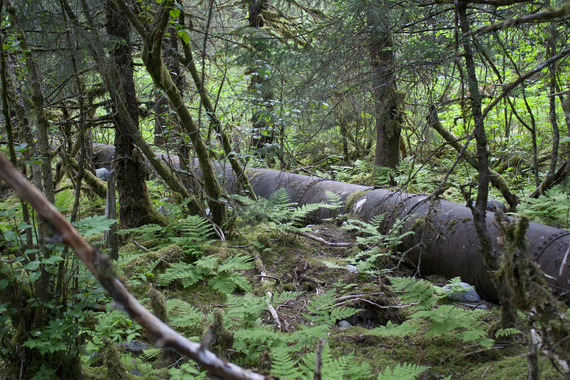 Among the many voices in the ongoing XL pipeline debate are those of aboriginal communities on both sides of the border who will be directly affected. President Cyril Scott of the Rosebud Sioux said, "Come to our lands and we will fight you there." Thomas-Muller from Pukatawagan First Nation in Northern Manitoba said, "All roads lead to the same answer. The answer is that the entire economic model of our country called Canada is based on suppressing indigenous rights and based on dispossessing our people from their land so that multi-national corporations can go in there free of any blockades and blockages and extract those natural resources."

Water and air quality issues, potential environmental disasters, possible catastrophic heath concerns and indigenous communities well-being aside, Congress has spoken and they say let it flow. What are a few more feet of pipe and another 830,000 barrels a day of crude from Canada's oil sands south to the U.S. Gulf Coast anyway? The remaining portion of the Keystone pipeline is only gonna be 1,200 miles long, and with Alberta sitting on the third-largest proven oil reserves on earth, (just behind Saudi Arabia and Venezuela) it's not gonna dry up anytime soon, so we're good to go.

The State Department's environmental review has assured us that the Keystone XL won't have a significant effect on greenhouse gas emissions, which is great because environmental activist Daryl Hannah recently told me at an Amazon Watch event in Los Angeles focused that, "Not even Fox News pundits are denying climate change at this point."

The State Department says the XL will bring 42,000 new jobs and $2 billion in earnings in the U.S., but forgot to mention that only about 50 permanent jobs will be left after construction is concluded.

But lets look on the bright side of the black snake's southern migration. There's another voice in the mix that no one even talking about. The voice of the people says gas prices are way down and the Keystone XL is out of the new cycle for the moment so it's time to buy cars. Car craving capitalists on both sides of our Northern border are saying, "More, bigger, better, now!" More full-size trucks, more crossovers, more SUVs and yes, more Cadillacs!

Obama says the jobs market is expanding and Detroit say sales are great; General Motors Co. posted an 18.3 percent gain (best January they've seen in seven years) while Ford Motor Co. says January sales jumped 15.3 percent and FCA US LLC (formerly Chrysler Group LLC) reports a 14 percent sales gain in January. "Consumers feel very good because more people are working, the U.S. economy is expanding and fuel prices are low," said Kurt McNeil, GM's U.S. vice president of sales operations. People are also feeling good on the other end of the pipe; in Canada, GM's increases in sales for January are led by none other than the Cadillac Escalade Luxury SUV, which are 22 percent higher than last year.

Hopefully these environmentalists are just overacting and the big black snake won't burst it seams and belch toxic tar sands all over the reservation, but when you're laying pipe someone is always bound to get screwed, and though the Keystone XL might not be great for the Russian, Argentinean or other oil dependent economies, or for pacha mama, the Koch brothers (aka Koch Industries) are poised to make billions, and for now, it's a great time to be driving cheap here in the lower 48.