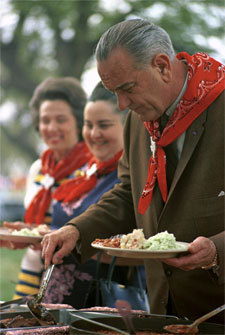 Barbecue has been used as a tool in American political campaigns for more than 150 years. Old newspapers frequently document huge events with hundreds of guests eating for free at the expense of a candidate. But no politician ever used the conviviality and informality of cooking and eating outdoors than the 36th President, Lyndon Baines Johnson, elevated to the post in November 1963 after the assassination of John Kennedy. Wags have commented that President Obama doesn't spend enough quality time with Congress. Perhaps the barbecue loving Chicagoan could learn a lesson from the man who sat in his chair 50 years ago.

The rolling Hill Country west of Austin, TX, is inelegant, rocky, dusty, tangled with brush and prickly pear cactus, cloven occasionally by meager stream beds that lie dry and barren much of the year. There are few cattle because there is little grass and less water to sustain them, but there are plenty of tarantulas, scorpions, horned toads, and barbecue pits.

The food for most of LBJ's barbecues was prepared by Walter Jetton (pronounced ji-TON). Jetton (1906-1968) ran a popular catering company out of Ft. Worth, just a few hours from the LBJ Ranch.

Jetton was a natural showman. He was usually dressed in a Stetson, apron, creased white shirt, and string tie, and he billed himself as the "Barbecue King". He often had a whole headless steer rotating on a spit beside a smoldering log fire. Texas humorist Richard "Cactus" Pryor jokingly wondered aloud if he used the same carcass at all his barbecues.

Click here to see Jetton basting his steer, read more about him and his barbecue philosophy, and see his recipes for his barbecue sauce and his mop as well as Lady Bird's Barbecue Sauce.

Johnson emerged from this terrain molded by it: Craggy, unadorned, complex, and formidable. Although he rose to the Presidency, he remained rooted in Texas, and used his LBJ Ranch and the barbecue skills of Walter Jetton to achieve political ends.

In 1950, the former school teacher and his wife, Lady Bird, bought a parcel on the banks of the lazy Pedernales River (pronounced PERD-nah-less) just west of his boyhood home in Johnson City. The modest ranch became an integral part of the image he wanted to project in Washington. Rich Texans all had ranches. He was not rich, but his wife had an inheritance that she had parlayed into a tidy sum by buying a radio station in Austin.

It was also a place to retreat, relax, and recuperate from the pace of the Washington. He often invited constituents, donors, politicians, and staff to the LBJ Ranch. When they arrived he would show them his spread, often on horseback. The visits were opportunities for LBJ to parlay with his guests man to man as they passed across the pastures, returned to the ranch house for bull sessions, then a barbecue, and an overnight stay. The intimacy was politically effective.

As his political career progressed, the barbecues got bigger and more elaborate, and as more important guests came to Hill Country, Lady Bird undertook the first of several remodeling plans to host them in style. Eventually the ranch would include several guest suites, a swimming pool, a radio tower, and an airstrip capable of handling small jets.

In October 1959, as Majority Leader of the Senate and candidate for the Democratic Presidential nomination, he hosted his first big barbecue, for his friend, Mexican President Lopez Mateos. Among the guests were his father's old friend, Speaker of the House Sam Rayburn, and former President Truman, a man LBJ admired greatly. It was a great success, politically and socially. Even Truman wrote to compliment his host.

John F. Kennedy, the charismatic young senator from Massachusetts, thwarted Johnson's nomination attempt, but he invited the powerful Senator from the South to run for Vice President on his ticket. They won a close campaign against Richard Nixon and Henry Cabot Lodge, in 1960. 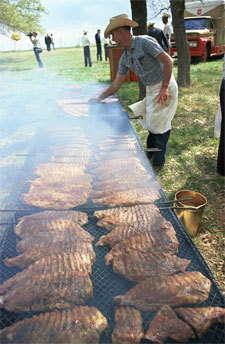 In April 1961, the new Vice President hosted a barbecue for West German Chancellor Konrad Adenauer. The American West held a romantic appeal to Europeans, and the attraction was greater to Adenauer because Hill Country had been settled by many German families. According to Hal K. Rothman, author of the book LBJ's Texas White House, "The American West and its ranching, its barbecues, beans, and chuck wagons, had a cross-cultural resonance that allowed even those raised in other parts of the world to participate in an American myth made universal by popular fiction and the movies. Foreigners could see their preconceived vision of the 'real America' in the vistas, settings, entertainment, and libations of the LBJ Ranch. For Europeans, this was all especially poignant; it resonated with the myths they held about the American West. Adenauer's visit began a universalization of the ranch, its transformation from a place of continental iconography to one of international symbolic meaning."

Later that year Field Marshall Mohammed Ayub Khan of Pakistan was feted at the ranch. Khan deftly averted a diplomatic incident by ignoring the fact that pork ribs were served. Pork is forbidden to Muslims. But a connection was made between men of rocky soil and poor farmers. Khan later became President of Pakistan.

The most important barbecue ever planned for the LBJ Ranch never happened. It was scheduled for November 23, 1963, when the Vice President, the President, and their entourages were planning to dine beneath the oaks on the Pedernales. But a few hours before they were to board the choppers from Dallas to Johnson City, on November 22, Kennedy was assassinated two cars in front of Johnson as they drove in a motorcade. Instead of taking his boss for a tour around his spread and feeding him barbecue, Johnson found himself back in Washington attending memorial services, and meeting with the cabinet, leaders of Congress, and former Presidents Eisenhower and Truman.

A month later, frazzled from, as Ladybird described it, the "tornado of activity that has surrounded us", the Johnson family retreated to the ranch on Christmas Eve. West German Chancellor Ludwig Erhard was scheduled to visit the President to discuss the Soviet threat, the Berlin Wall, and other important matters. Rather than return to Washington for a formal State Dinner, Lyndon invited Erhard and his entourage on down to what historians claim was the first official Presidential barbecue in history. Yes, Johnson's first state dinner was a barbecue for 300 catered by Walter Jetton on December 29, 1963.

When his staff realized it would be chilly that day, the sit-down part was moved indoors to Stonewall High School gymnasium, about two miles away. Workers did an admirable job of creating an outdoorsy feel with bales of hay, red lanterns, red-checkered table cloths, saddles, lassos, and mariachis. According to Lady Bird's diary, "there were beans (pinto beans, always), delicious barbecued spareribs, cole slaw, followed by fried apricot pies with lots of hot coffee. And plenty of beer." Jetton's famous six-shooter coffee was also served, a brew that one Texan said is "so strong it will float a .44." The food was served on paper plates, buffet style. 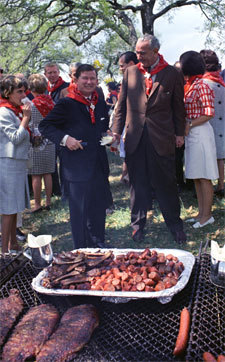 The President's aides wanted to add some sophistication to the event, so they got the world's most famous pianist, another Texan, Van Cliburn, to play classical music. Erhard presented Johnson with a bottle of 1959 Piesporter Goldtröpchen Feinste Spätlese by Reichsgraf von Kesselstatt, a superb sweet white wine. Johnson presented Erhard and his entire delegation with Stetsons.

Richard "Cactus" Pryor, a Texas humorist and KTBC employee, was master of ceremonies at this and several other barbecues. Pryor jokingly apologized to the German delegation because they could not find a recipe for barbecued sauerkraut.

Johnson's cookouts strove for authenticity with "the look and feel of a chuck wagon dinner," said Pryor. Unfortunately that included cowpies that the Air Force was asked to remove. For future events it was decided that the cattle should be kept on the south side of the river.

Johnson began spending more and more time on the ranch. In his five years in office he flew in 74 times and spent 490 days there, almost 25% of his term. The phrase "barbecue diplomacy" was coined by W. D. Taylor of The New York Herald-Tribune. Johnson liked the symbolism. It conveyed the sense of an everday man as President, the same image conveyed by Truman. It was so effective the Johnsons occasionally staged barbecues at the White House, also a first.

During the Presidential election campaign of 1964, Johnson flew Jetton around the nation to cook at political rallies. After a Jetton campaign barbecue at Gracie Mansion, New York City's mayoral residence, Brendan Gill wrote in the New Yorker "Barbecues as a symbol compare favorably with the 1952 hole in Adlai Stevenson's shoe."

Johnson and Minnesota Senator Hubert H. Humphrey won the election over Barry Goldwater and William E. Miller with the greatest popular vote in history up to that time, and 61% of the votes. Shortly after the election, Johnson staged an impromptu Victory Barbecue at the Ranch on November 4, 1964. He and Humphrey hosted the White House press corps as guests of honor.

The two dressed in western suits and Stetsons, rode horses, and ate ribs for the cameras. Jetton later wrote in his cookbook that Humphrey "sure gave these ribs a fit... He went at them like Clyde Beaty to cats and must have eaten them for an hour, putting away more of them than I have ever seen anybody do. So far as I could tell, they did him no harm."

One of the largest barbecues was on April 1, 1967, with 35 Latin American ambassadors and their wives. There was a huge re-enactment of the settling of Texas by Native Americans, followed by Spaniards, then Anglo cowboys, complete with buckboards and cattle. Johnson spoke briefly of his War on Hunger and he pledged three million tons of food grain to India and another $25 million in food for distribution by CARE. After all the guests left, he demonstrated his penchant for micromanagement by telling Social Secretary Bess Abell that "The food needed to be hotter in the future." It is unclear if he meant chili pepper or thermal heat. But in the next few moments he demonstrated his leadership. When told that Congressman Gonzales was unhappy because so many Republicans had been invited to the barbecue, Johnson replied that he was "President of all the people, Republicans and Democrats."

LBJ Library & Museum Online and numerous documents from the files of the LBJ Library & Museum, 2312 Red River St., Austin TX 78705. Special thanks to archivists Barbara Cline and Elizabeth Hansen for their help when I visited in February 2008.

Ribs being cooked on the pit, Latin American Ambassadors' Weekend, 4/1/1967, by Yoichi R. Okamoto, with permission of the LBJ Library & Museum.

All text is Copyright (c) 2014 By Meathead, and all rights are reserved. For more of Meathead's writing, photos, recipes, and barbecue tips & technique, please visit his website AmazingRibs.com and subscribe to his email newsletter, Smoke Signals.