For decades, the League of Conservation Voters (LCV) has named 12 political candidates to a biannual list we call the Dirty Dozen; it's our signature electoral program. This is how it works: The Dirty Dozen targets candidates for defeat - regardless of party affiliation - who consistently side against the environment and are running in races in which LCV has a serious chance to affect the outcome. Last election cycle, we defeated 11 of the 12 Dirty Dozen candidates.

Many members of the Dirty Dozen have relentlessly attacked the EPA's proposed Clean Power Plan, which would limit carbon pollution from power plants and represent our country's largest step ever towards tackling climate change. They've also blasted the EPA's proposed clean water rule, which would protect rivers and lakes that are critical to the drinking water of 117 million Americans. The poster child for this line of attack is Iowa Senate candidate Joni Ernst, who infamously proposed eliminating the EPA entirely.

As if the anti-environmental policies that Dirty Dozen candidates support weren't bad enough, there's also the matter of who's supporting them: the oil billionaire Koch Brothers. It's no wonder so many of them have made clear that they would protect taxpayer-funded handouts to the oil and gas industry - putting it bluntly, these candidates have chosen the Koch Brothers' polluted money over the best interests of the American people. We can only imagine what other untold pieces of the Koch agenda they'll push to implement if they are elected next week.

Finally, the 2014 Dirty Dozen is notable for the first-ever inclusion of an incumbent governor. Maine Governor Paul LePage earned this recognition by trying to gut bedrock environmental laws that keep Maine's water clean and safe to drink. LePage also displayed a brazen disregard for the threat of climate change, and with implementation of the Clean Power Plan largely lying in the hands of state governments, we simply can't afford to have governors like Paul LePage in office. Maine Conservation Voters Action Fund is active in opposing LePage, and his addition to the Dirty Dozen is a nod to the crucial role states (and state LCVs) will play to reduce climate pollution. 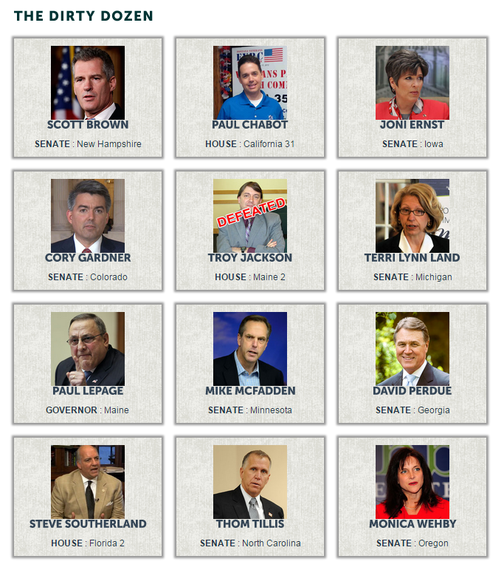 In addition to our national Dirty Dozen program, we've helped the State LCVs compile a Dirty Dozen in the States that highlights 12 of the most anti-environmental politicians running in competitive state-level races for governor, state Senate or state House this cycle that have been targeted for defeat by state LCVs.