Most of the talk about employment raises issues of "out sourcing", "off shoring" and the "automation" of work and seems to concern the developed world--as they see more and more companies and governments seeking lower costs for labor for goods and services.

But this is temporary. Many of the developing nations are outsourcing and concerned about mechanization too.

Indeed, the entire world is waking up to the fact that a new economy--a global economy based on creativity and innovation--is knitting every nation together with every other nation. In the process, both developed and developing nations alike are starting to feel the effects of a structural shift in the world's economics.

China, for example, is concerned with rising wages and outsourcing to Vietnam, other parts of Asia and Sub-Saharan Africa. They are also worrying about mechanization as more factories and farms are using robots instead of people. Other less developed nations have raised similar concerns. 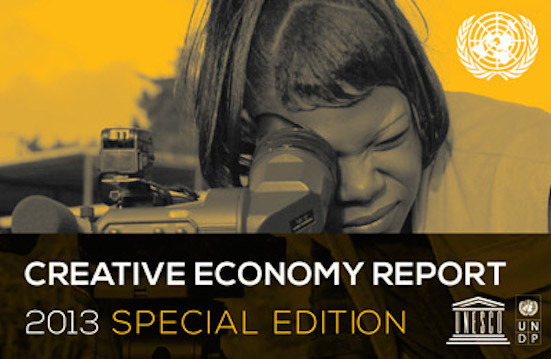 "There is an urgent need to find new development pathways that encourage creativity and innovation in the pursuit of inclusive, equitable and sustainable growth and development."

Figures published by UN Committee on Trade and Development (UNTAD) in "May 2013 show that world trade of creative goods and services totaled a record US$ 624 billion in 2011 and that it more than doubled from 2002 to 2011; the average annual growth rate during that period was 8.8 per cent. Growth in developing-country exports of creative goods was even stronger, averaging 12.1 per cent annually over the same period."

In the report UNESCO makes the point that "The creative economy has become a powerful transformative force in the world today. Its potential for development is vast and waiting to be unlocked. It is one of the most rapidly growing sectors of the world economy, not just in terms of income generation but also for job creation and export earnings."

Irina Bokova, Director General of UNESCO and Helen Clark, Administrator of UNDP say that the UN agencies must "must recognize the importance and power of the cultural and creative sectors as engines of sustainable human development."

In the last few years UNESCO created the Creative Cities Network (UCCN), meeting annually to "promote cooperation with and among cities that have identified creativity as a strategic factor for sustainable urban development."

It also began to recognize and award young people for their design prowess who demonstrated their talents at the second meeting in Shenzhen China.

Also recently, according to Danielle Cliche, Chief of the Section on the Diversity of Cultural Expressions, several UNESCO projects took shape:

"In Niger, our experts worked with the government and NGOS to develop a new strategy and three year action plan to strengthen the role of cultural enterprises and industries in the pursuit of economic and social development goals. Capacity building was provided for the staff working at the agency responsible for implementing the strategy and long-term partnerships were identified to make the strategy sustainable.

In the Seychelles, the goal was to support cultural entrepreneurs in the creation and marketing of their cultural goods and services. The results were many, including the finalization of a creative industries policy document (not only for the Seychelles but also for the Indian Ocean region), the adoption of a music industry development implementation strategy and the creation of the Seychelles Agency for the Creative Industries (SACI).

The Creative Viet Nam strategy resulted from collaboration between Convention experts and Viet Nam's Institute for Culture and Arts Studies (VICAS), which led to the elaboration of a National Strategy for the Development of Vietnamese Cultural Industries 2020 with a Vision to 2030 and a related Action Plan with visual arts as priority. Importantly, financial resources were also identified to implement these strategies."

It isn't clear how other regions in the developing world have taken to the notion that creativity and innovation are major factors in the economic development of their nations, but UNESCO, together with UNDP and UNCTAD, is undaunted. Says Danielle Cliché, "UNESCO takes every opportunity to encourage and support policies and action that address the role of culture in inclusive, sustainable social and economic development, particularly through the fostering of cultural industries and economic growth."

As a result, with UNESCO's help, developing nations are beginning to ask their people to look at their unique culture, their customs and identities, in short, their art and culture as a way to open the floodgates to global commerce.

But the examples in the world are everywhere and begging for help. Take the work ongoing in Santa Fe for example.

The International Folk Art Market (IFAM) in Santa Fe, New Mexico is the largest international folk art market in the world and a major global cultural event. Their success led to Santa Fe's designation as a UNESCO City of Folk Art, the first U.S. city named to UNESCO's prestigious Creative Cities Network. While neither UNESCO nor the Market have nurtured that relationship, the effort in Santa Fe bears scrutiny.

This July they hosted over one hundred of artists who "went through business education and mentorship programs designed to help them learn the details of everything from pricing to marketing.

"Janet Nkubana of Gahaya Links in Rwanda explained that this business experience has helped expand and build relationships for her cooperative of close to 5,000 Hutu and Tutsi women who, following the Rwandan genocide, found reconciliation through weaving "peace baskets," gorgeous sisal baskets colored with vegetable dyes."

This example represents only one of many stories about artists returning home after being mentored and then starting a creative effort for the larger community-exactly what UNESCO wants to happen.

Many other developing countries have unique historical and cultural identities and their folk art represents their best opportunity to leap frog into the new economy. Why? Because folk art is in abundance in the developing world, and opens the doors to creativity and all the creative industries so in demand: fashion, design, sculpture, literature and more. And, it is one of the fastest growing sectors of the world economy.

More and more it is being acknowledged around the world that "culture" is essential to understanding the role and responsibility of citizenship, and importantly creativity too.

Washington Post writer David Ignatius advocated for a Digital Marshall plan to teach entrepreneurship, creativity and innovation for Iraq. Maybe a plan for the developing world that does the same for folk artists makes sense too. Maybe UNESCO and IFAM, especially their online and mentoring programs, represent the start of such an effort.