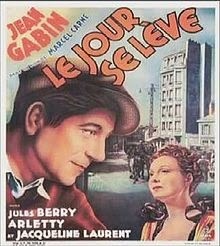 Marcel Carne was renowned for Les enfants du paradis (Children of Paradise, l945). Le jour se leve, (Daybreak, l939), which was recently revived at Film Forum, is a relatively minor melodrama. However it's notable for the way that it exhibits the signature stylistic elements and themes which would blossom in Carne's great masterpiece released 6 years later. Jacques Prevert wrote the screenplay for both and the themes of illusion and reality, which are the palette from which the director works in Les enfants du paradis, unfold from the beginning of Le jour se leve, when a blind man cries out "quelqu'un est tombe." Later the police shoot at a reflection in a mirror rather than the reality and then there's the character of Mr. Valentin (Jules Berry), the animal trainer who performs his tricks on a magical proscenium stage. One of his other bits of magic is the art of seduction and it's in the fight over a woman named Francoise (Jacqueline Laurent) that Valentin and a factory worker named Francois (Jean Gabin) square off. Gabin, one of the greats of the French cinema, never appears in film without a cigarette in the side of his mouth. Yet Carne takes this to new lengths in Le jour se leve, where Gabin is forced to chain smoke since he doesn't have matches in the room where he is holed up from the police. What's even more significant on the subject of illusion is that the whole set of the movie, never ceases to look like a set, as would be the case in Les enfants. Carne was a film director who was enchanted by theater and theatricality itself would become his subject in the later film. The other woman of the movie an enchantress named Clara is played by another great of the French cinema, Arletty, who Carne would choose to star in Les enfants. It's she who proclaims "I'm sick of men who talk of love. They talk so much they forget to make love." It's the perfect line from an actress who was imprisoned due to a wartime relationship with a German flyer and who once famously said, "My heart is French but my ass is international."

{This was originality posted to The Screaming Pope, Francis Levy's blog of rants and reactions to contemporary politics, culture and art}