In a short amount of time, the words "eco-friendly" and "green" have quickly become half-hearted buzzwords. I've stayed at plenty of "eco-luxe" hotels, for example, that while providing freshly-laundered bamboo sheets throw out enough food to feed a small nation. It's a hard thing to do, and few do it right. But when you see a company working from a personal mission — instead of according to a brand marketing plan — it's a sure plan for real success. And ultimately luxury travel should be about experiencing something new, not just coming home with a tan.

Le Méridien Bora Bora has taken this to a whole new level, where an entire environmental protection center was built to protect one animal: the sea turtle. The center was built in 1991, after a concerned guest brought an injured turtle that needed immediate care to the hotel. The goals of the Marine Turtles Protection Center are threefold: to raise babies to optimize their chance of survival when released into the ocean, to treat injured turtles and release them back into the wild, and, most importantly, to educate visitors to become ambassadors in the world to explain the importance of protecting sea turtles. 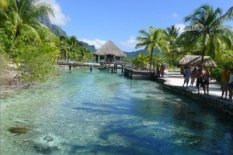 The sea turtle, or honu in the local language of Reo Tahiti, is an ancient, sacred animal in Tahitian mythology. Sea turtles were considered to be an emanation of the powerful ocean gods. They represented our universe, where the curve of their shells symbolized a domed sky over the earth. They are also today one of the main patterns in the Polynesian tattoo, a symbol that was customarily reserved for warriors. The range of meanings varies according to specific islands and situations, symbolizing anything from wisdom and longevity to family or travel.

But unfortunately the beloved creature has long faced danger from poachers. Not long ago green turtles were swimming plentiful in the Pacific ocean. Turtle meat, indeed, was a rare specialty, allowed only for Polynesian royalty or special events. Today, however, turtles are widely revered for their meat. Thanks to poachers who sell turtle meat on the black market, hunting has now become a profitable trade, encouraging a new breed of trappers.

Hotel Manager Denis Le Nohaic can be credited with growing Le Méridien's protection efforts. He saw saw firsthand what was happening to sea turtles in Gabon, when working at Le Méridien Re-Ndama. Hundreds of turtles are killed along the Gulf of Guinea, not only for meat, but also for religious sacrifices. One night, Le Nohaic was walking on the beach with friends and family, and found a huge turtle whose flippers and head were cut off.

"The scene was scandalous because the turtle was not killed for eating but only for pleasure. I decided to join an association which wanted to protect the turtles in that part of Africa," says Le Nohaic. He organized a group to secure the beaches at night against poachers and started an educational program to educate children in nearby villages. He next extended the program throughout Africa's west coast wherever there was a Méridien hotel: Angola, Cameroon, Guinea and Nigeria. A colleague started a similar program in Bora Bora, arising from the concerns of one hotel guest, and it was natural for Le Nohaic to take over after leaving Africa. 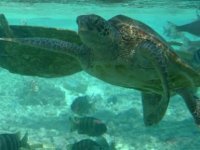 In Bora Bora, police are ill-equipped to stop poaching in its tracks. Le Nohaic, knowing that eating turtles is unfortunately a part of adult island culture, decided to focus on educating kids. He traveled to schools to teach kids about the importance of protecting the environment, and entire classes from all over the Tahitian islands came to visit the center.

The strategy paid off. In 2007, a woman called the hotel and asked if they accept turtle eggs. Her husband, a fisherman, had killed two female turtles for Christmas Eve dinner, and tossed the hundreds of eggs he found inside them. Their nine-year-old daughter explained that this was wrong and asked her mother to call Le Méridien to check if the team could do something to save the babies. The eggs were carefully placed in a nest on the beach, and three months later, fifty-nine babies hatched. Eighteen of them are still swimming in the hotel's inner lagoon.

The Turtle Center has become a real sanctuary and a scientific observatory. "Thanks to the assistance of the Government, the Ministry of the Environment and to the advice of numerous American scientists, you can see a wide number of turtles today freely living in the resort's interior lagoon," says Le Nohaic. They are taken care of on a daily basis by a marine biology team, and are released as soon as they are strong enough to survive alone in the ocean.

When Le Méridien speaks of making its guests global ambassadors in avocation of protecting marine life, it's not just about creating an educational environment. It's about creating participatory events that they won't soon forget. When the center deems a turtle ready to be released back into the environment, they invite guests to participate in a ceremony for the occasion. "Some of them are very touched by the event, understanding that the turtle is going back to its natural ecosystem and will have to survive and escape the various threats that surrounds it," says Le Nohaic. 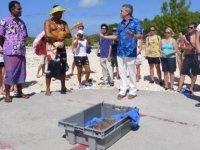 I was invited to witness a recent ceremony. After marine biologists prepared one turtle, Tea, for the ocean journey, a procession of dozens of hotel guests walked her to the ocean. An island priest baptized Tea, asking God to give her strength to escape poachers, find food to grow and come back to the island to lay eggs. Lastly, guests are made godparents of the turtles, and asked to help carry the center's mission globally.

There's lots in store for the Marine Turtles Protection Center, providing ample reasons to visit soon. Next year the center will expand to include a new marine laboratory, a public aquarium, a tactile pool and a dedicated museum complete with a conference center. In addition to the expanding marine education center, Le Méridien Bora Bora is opening up several new initiatives to encourage guests to participate in reef restoration, with a new coral breeding center and a coral fish nursery.