Despite an internal company memo in 1900 that read, "any paint is poisonous in proportion to the percentage of lead contained in it," Sherwin-Williams Co. went on to become a leading lead-based paint manufacturer and to promote with other members of the industry the use of paint with large percentages of lead -- "the higher, the better."

"White lead should be the basic ingredient of all white paint and light tints," read a Sherwin-Williams magazine advertisement in the 1920s. "It is to these paints exactly what flour is to bread."

Sherwin-Williams is now one of five corporations that went on trial in California this week, facing claims they knowingly poisoned generations of children with the neurotoxic heavy metal and continue to do so today, with lead-based paint lingering and deteriorating on the walls of homes. The plaintiffs, 10 California cities and counties, are seeking some $1 billion in costs to strip the toxic heavy metal remaining on millions of residences throughout the state, and save "additional children from being poisoned" and millions of dollars in medical, special education and lost-productivity costs burdening "society as a whole," according to a trial brief filed in the Superior Court of California on July 1.

A representative for the companies, Bonnie J. Campbell, suggested that the lawsuit, which rests on the claim that lead paint poses a "public nuisance," carries no "factual or legal merit." In a pre-trial statement, Campbell argued that extensive abatement of lead paint is "unnecessary" -- pointing to previous federal and California determinations that lead paint, "if well maintained and intact, typically poses no health risk."

Not everyone agrees, and the trial may set an important precedent for other states and the federal government, experts say.

"They put out a dangerous project, knowing it was dangerous, and now they are responsible for helping to clean it up," said Owen Clements, chief of special litigation at the San Francisco City Attorney's Office, who has been working on the case since the lawsuit was filed 13 years ago. The trial finally began on Monday, after years of industry objections.

David Rosner, co-director of the Center for the History and Ethics of Public Health at Columbia University, will testify as an expert witness for the plaintiffs.

"This is a huge epidemic that has changed the lives of literally millions of children in America," said Rosner, who described a history of deceit within the lead paint industry and the ongoing public health battle in the book he co-authored, Lead Wars, published in April. "The single biggest problem has been that industry historically defeated any attempt to control lead on the walls of the nation.

"Lead on walls is by far the largest source of poisoning for kids," Rosner added. Of course, lead-painted walls -- especially if deteriorating -- can mean lead on windowsills and floors. And every time a window or door is opened or closed, more dust can be stirred, Rosner said.

The U.S. government banned lead paint for residential use in 1978, after nearly a century of scientific studies linked low levels of the paint to low IQ, learning disorders, sociopathic behavior and other maladies. The ban came several decades after other countries had forbidden its use. 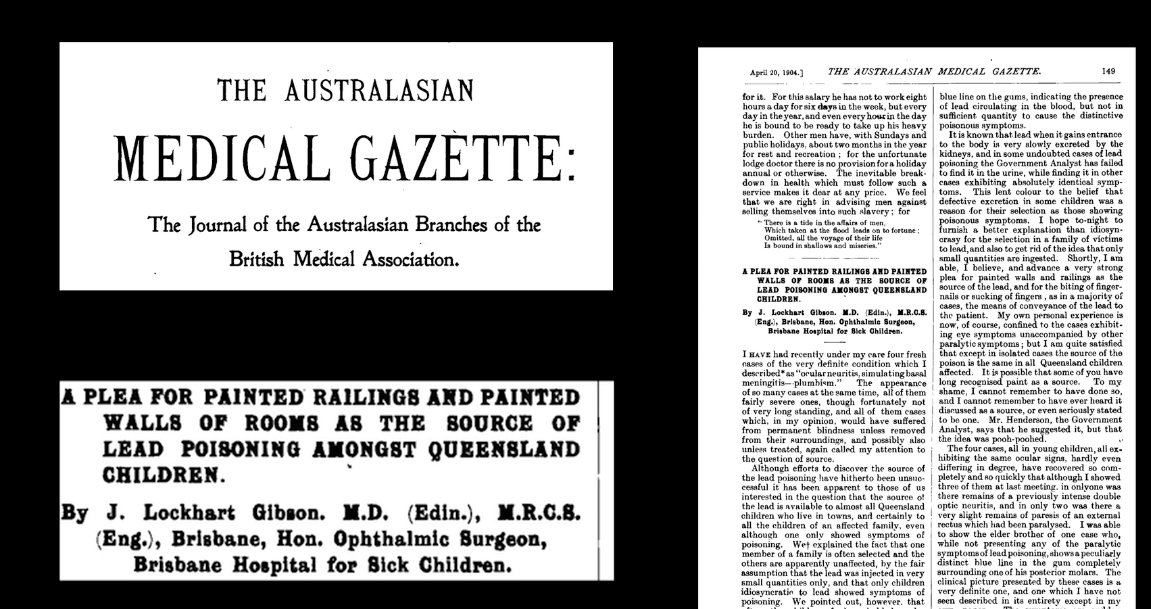 Documentation of lead's toxic effects date back more than a century. (Courtesy of "MisLEAD")

Rosner recalled testifying in Rhode Island, one of several states where municipalities attempted to hold industry accountable for past damages to children and to force companies to eliminate remaining hazards. All lawsuits have fallen in the lead paint industry's favor, and Rhode Island is no exception. While the 2006 verdict in that case came down against the industry, the decision was overturned two years later based on a technicality.

"The court was under enormous pressure," Rosner said. "Industry devoted enormous amounts of energy, even threatening to leave the state."

Clements said a California Court of Appeals ruling already "rejected a lot of the defendants' favorite arguments." He said he is optimistic the outcome in this trial will be different. The defendants, which also include Atlantic Richfield, NL Industries Inc. (formerly known as the National Lead Co.), ConAgra Grocery Products and DuPont Co., continue to fight back.

"Blood lead levels are at historic lows in California and are lower than national averages," Campbell said in the pre-trial statement, continuing to refute the charge that lead paint is a "public nuisance." "Regulatory efforts and prevention programs -- programs funded in part by defendants in the lawsuit -- have worked and help to continue to drive blood lead levels in California towards zero."

The defendants' trial brief suggests any accusation that the industry wrongly promoted lead in decades past "rests on hindsight."

“The fact is, armed with all that was known about risks from lead paint, no public health agency advised consumers against using lead-based paint in homes until 1951,” Campbell told The Huffington Post in an email. "The former manufacturers never hid any information about the health risks of lead paint from public health officials, governments or the public."

The progress in limiting lead pollution is good, according to public health experts -- just not good enough.

"We still have that opportunity to make a difference with lead," said Ellen Silbergeld, a professor at Johns Hopkins School of Public Health.

The U.S. Centers for Disease Control and Prevention estimated that up to a half-million children have blood lead levels above "the level of concern," a benchmark lowered to 5 micrograms per deciliter of blood in May 2012. The CDC also noted that there is no safe level of lead in a child's blood.

"The effects of lead may be most severe for adults, and at extremely low levels -- even below levels associated with children's cognition," said Silbergeld, noting that studies have linked lead exposure to increased blood pressure and stroke.

Silbergeld criticized the industry's arguments, such as the statement by Campbell that "the currently reported risks to children were unknown and unknowable" in the early decades of the 20th century.

Talking about "currently reported risks," suggested Silbergeld, confuses the issue. To be sure, scientific understanding of what levels of lead cause what degree of harm is always evolving, she said. "But the proper question to be asking is when did we know that lead was not a wise substance to be around?

"There's been knowledge that lead was toxic going back millennia," Silbergeld added. "It was probably one of the first poisons identified by the ancients of Greek medicine."

Nevertheless, lead paint manufacturers went as far as marketing their product as not only safe, but beneficial to health thanks to its durability and washability.

Lead companies formed an industry group in the 1920s with the mission of improving its public image, campaigning against government regulations and thwarting the use of safer alternatives, according to the trial brief.

"They were deliberately putting themselves in positions to create a different knowledge," Silbergeld said. "That is where they are culpable."

Critics argued that the paint industry continues to use such tactics to tweak the truth, and highlighted other examples from Campbell's statement, such as, "cities and counties have stated that they have no or very few cases of children's ingestion of lead requiring intervention."

"The problem is, you can't really see lead poisoning in a kid," Rosner explained. "The damage is subtle. How do you know if a kid would have a five-point-higher IQ?"

While studies of large groups of children have shown exposure to small amounts of lead can affect average intelligence, learning and behavior, he said, pinning those effects on any individual is far more difficult.

Tamara Rubin, executive director of the nonprofit Lead Safe America Foundation and director of the upcoming documentary "MisLEAD," may be in the minority with her awareness of the issue. Two of her sons suffered obvious acute lead poisoning during renovation of their family's home, and now struggle with learning and behavioral problems.

Rubin added her take on the industry argument that few kids now need treatment for lead poisoning: The CDC's level of concern is still too high and the testing of blood lead levels in children still too uncommon. She said she believes that one in three American children under the age of 18 is affected by lead poisoning.

"Today, we have new hazards -- hazards that were not present in the 1950s and 1960s," Rubin said. "Even outside of the concern of remodeling, the mere deterioration of paint that was applied in the '40s, '50s, and '60s -- paint that was intended to last for decades (and did) -- is deteriorating now for the very first time."

Even the Sherwin-Williams' 1900 memo hinted at later dangers: "The noxious quality becomes serious in a paint which disintegrates and is blown about by the wind."

This article has been updated to include additional comments from Bonnie J. Campbell.