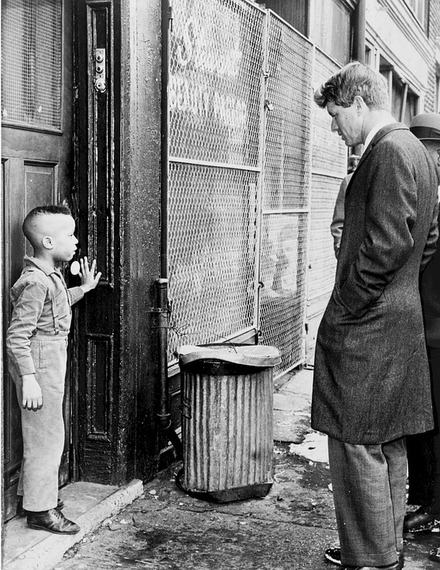 People's anger and frustration, both in the U.S. and around the world, has reached a critical point. Too many of our leaders seem unable to solve such monumental challenges as global terror, regional wars, poor mental health, drug abuse, climate change, social conflicts, and the growing educational and economic divide. This discord reveals an underlying lack of leadership and understanding of how to address these unprecedented domestic and global issues. For example, the late Helmut Schmidt, a highly respected German statesman and former Chancellor, was said to have bemoaned the lack of leaders in high office who truly understand today's financial system during the European financial crisis in 2010.

Building on Chancellor Schmidt's observation, I would add that effective leaders, both in high office and at all levels of society, must understand not only global economics, but also the social and psychological complexities that drive our ever-changing world. At its core, this requires that leaders understand and empathize with the needs of the people they are serving. The successful recruitment of young jihadists in western countries, the riots and protests that followed the police shooting of an unarmed teenager in Ferguson, and the banking practices that caused the global financial crisis, are just a few recent examples where responsible leaders failed to understand the human needs that drive those behaviors and actions.

In his book, The Values Driven Organization (Routledge 2014), Richard Barrett builds on the ideas of psychologist Abraham Maslow, when he describes how our needs are the primary drivers of behavior. Barrett describes the underlying sequence of cause and effect, where high priority needs determine our values and beliefs, which then feed our thoughts, feelings and emotions, and ultimately drive our behaviors and actions. (See graph below.)

This should inspire any leader to ask, "How can I better understand people's unmet needs, and how do those needs effect people's behavior and actions?"

Here are three factors leaders might consider when trying to understand people's needs:
1) People's Attention to Specific Needs Vary: Richard Bennett writes, "The amount of attention and sustained effort we give to satisfying a specific set of needs changes depending on one's life circumstances."

For example, while I was growing up in West Germany, we had the freedom to travel to countries around the world, whereas my relatives in East Germany and their fellow citizens were limited to travel mostly to other communist countries. Because I had freedom to travel, it allowed me to focus my attention on studying and exploring the wider world. While many people in East Germany committed their sustained attention to fighting for their freedom and eventually bringing down the Wall.

2) Putting Yourself in People's Shoes: Effective leaders must be able to put themselves into the shoes of the people they serve in order to empathize with them and gain a deeper understanding of their needs.

A great example is the welcome keynote that Chairman Heart of the Ute Mountain Ute Tribe gave to the participants at the Ute Mountain Native National Partnership Retreat when he said, "I would like to invite you to walk in our moccasins so you can better understand us and our needs." That metaphor inspired the participants to put themselves -- with their hearts and minds -- into the shoes of the tribal people. As a consequence, I noticed as a facilitator, that the quality of listening reached a deeper level and led people to not only understand, but also empathize, with the needs of the tribe. This allowed participants to come up with more innovative and creative solutions to the tribe's challenges.

3) Deficiency Needs and Growth Needs Drive Different Behaviors: For effective leaders it is crucial to understand the difference between "deficiency" needs, e.g. staying alive and healthy, and "growth" needs, e.g. achieving autonomy or pursuing one's life purpose. Richard Barrett writes that people's attention to unmet deficiency needs creates anxiety and fear, but the attention soon goes away after those needs are met. Growth needs, on the other hand, drive deeper and more sustained commitments, even after those growth needs have been met, because they satisfy people's on-going desire for internal alignment and fulfillment.

The big difference between focusing on growth needs versus deficiency needs was made evident during a Blue Earth Network consulting project where our team collaborated with the Atlanta Center for Self Sufficiency (ACSS) to help homeless people get off the street and back into the work force. Previous programs had focused on people's deficiency needs, such as getting an apartment and finding a paying job. With that deficiency needs-based approach after only 3 months over 50% of the homeless had dropped out of their jobs.
In contrast, our new approach focused on people's growth needs. By helping people find jobs aligned with their purpose and passion, over 75% of the previously homeless were still in their jobs after 9 months. (See graph below). 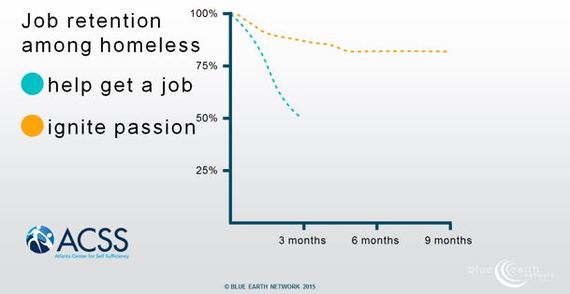 How should leaders apply these lessons?

Effective leaders, regardless of the kind of organization or role, must seek out opportunities to put themselves into the shoes of the people they serve to better understand and empathize with their changing needs, and then translate that understanding into a vision for a better future. In order to mobilize people in a deeper and sustained way, that vision must go beyond deficiency needs and truly inspire people by focusing on their growth needs.

Robert F. Kennedy, in the midst of the Civil Rights Movement of the 1960's, clearly reinforced the power of putting oneself into people's shoes before judging, when he said:
"If any man claims the Negro should be content... let him say he would willingly change the color of his skin and go to live in the Negro section of a large city. Then and only then has he a right to such a claim."

I believe if we had more such leaders who truly empathized with people and responded to their unmet needs -- specifically focusing on the growth needs of the world's youth -- fewer of our young people would be drawn to radical leaders who prey on their fears and anxieties related to their deficiency needs.