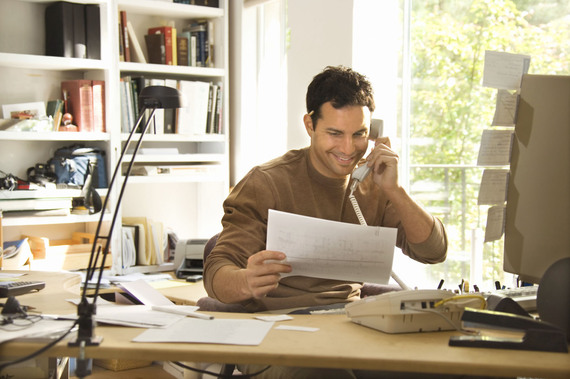 The year was 2007, and a team member who worked with me in the Vancouver office of SAP knocked on the netting of my open-concept cubicle one day and asked, "Dan, my wife and I want to move to Halifax. Can I keep my job and begin to work from home?"

"Sure thing," I responded with both unbridled enthusiasm and blind acceptance. "Whatever makes you happy."

Back then, at a time when Nancy Pelosi was becoming the first female Speaker of the House in U.S. history and England was banning smoking in all public indoor spaces, working remotely and working from home were in their infancy. No one really had a playbook or a manual. If it happened, it was done to keep employees from moving to another company or as a reward for high performers.

My colleague performed very well in his Halifax setup. It was an easy decision. He made it work. We made it work. It was mutually happy, harmonious and healthy.

But it doesn't always work out that way, and it certainly isn't the normal practice of today's organizations. Similarly, leaders aren't exactly preparing themselves for such a scenario, particularly as the workforce evolves to become not only transient and mobile, but also part-time in nature.

Whether small, medium or large in size, organizations have been or are set to grapple with remote-based leadership issues. I believe there are some compelling reasons why this is going to snowball quite soon, and leaders will want to prepare themselves to augment or adapt new leadership styles as workers begin to work from anywhere.

In my opinion, there are three remote-based leadership scenarios to contemplate:

Two key points were raised in a Canadian study titled "Basic Trends in Outsourcing and Offshoring in Canada," although the points are nothing new -- simply put, outsourcing and offshoring continue to increase. There has been an increased trend to shift to service outsourcing. Service outsourcing has increased in almost all industries, and the rate of growth was highest in service industries such as business services, financial services and insurance services. The impact is that formal teams continue to shrink at headquarters, but virtual teams continue to grow between outsourced work to contractors and service firms. Clearly this will have an effect on leaders, teams and workers in general.

According to the 2008-2009 World at Work Salary Budget Survey, telework continues to be one of the fastest-growing options being made available to employees, growing from 30 percent of U.S. companies and 25 percent of Canadian ones offering it in 2007 and growing to 42 percent and 40 percent respectively in 2008. Similarly, a Global Workplace Analytics report found that telework options grew nearly 80 percent between 2005 and 2012. Telework is not only being used as an option to reduce real estate costs, helping save bottom-line dollars for any size organization, it is being used as both an employee retention and attraction strategy, despite Marissa Mayer's insistence at Yahoo to haul everyone back to the office. The impact to leaders is that more and more employees will have the option to, or will be encouraged to work from home, thus separating the day-to-day interactions of the physical team and thus creating a virtual team who may only meet face-to-face once or twice per month.

According to both KPMG and McKinsey, the global M&A business is, well, back in business. Indeed, according to Mergermarket, the first half of 2014 saw worldwide mergers and acquisitions occurring at a valuation of more than $1.5 trillion compared to $1 trillion in the first half of 2013. In fact, their findings indicated 2014 was the most active start to the year since 2011. How does this affect remote-based leadership? Mergers and/or acquisitions often lead to restructuring, which can often lead to new team members. Mergers and acquisitions are often national or global in nature, thus team members are welcomed into the fold from different area codes.

By virtue of a team expanding over different offices, area codes and cities, leaders must take into consideration how this can affect both the team and leadership needs specifically.

In summary, the traditional, physical water cooler will become all but empty because no one is around the office anymore to refill it, and thus, the way in which people are leading must also change.

Ask yourself these questions:

There obviously are many more questions to ponder and post, and I'd encourage you to self-reflect, but the bottom line is that teams are going to increasingly become virtually segregated and leaders need to act differently.

Leaders must shift their thinking, re-think their style, suspend past assumptions and embrace new ways to address the obvious fact that:

The distance may be 2,755 miles between Halifax and Vancouver, but I can assure you that it never felt like more than 5 cubicles due to the ways in which my colleague and I mutually developed our long-distance relationship. It worked so well, he followed me from SAP to TELUS a couple of years later.

Dan Pontefract is the author of Flat Army: Creating a Connected and Engaged Organization and is Chief Envisioner at TELUS Transformation Office. He's currently at work on his next book.