Captain John Havlik is a badass. In 2015, Havlik retired from the U.S. Navy after 31 years of distinguished service. For 29 of those years, he was a member of the SEALs -- the Navy's elite special operations forces. He has been a part of all of the SEAL teams, including SEAL Team six, considered the SEAL's best-of-the-best. His stories -- or at least those he's at liberty to share -- are hard-earned, colorful and salty. When Captain Havlik speaks to groups about leadership and teaming, it's not based on abstract pie-in-the-sky leadership theories. Havlik isn't some well-manicured leadership author. He's a rough-and-tumble guy who has actually led... often in do-or-die situations. He's got a bullet hole in his right forearm. Like I said, badass.

I've had the honor of knowing Captain Havlik since before he joined the Navy. We were teammates on the swimming and diving team at West Virginia University. Even back then Havlik was an impressive guy, the team member that everyone else looked up to. Since he retired from the Navy, I've brought him in to work with a number of clients for whom I've designed leadership and succession programs. I bring the leadership best practices, John brings them to life.

One lesson Captain Havlik shares is particularly powerful. It's about the SEAL's grueling candidate training school in San Diego, California. During the training there is a conspicuous bell, ever-present, that any candidate can ring any time they decide to quit. Nearly 75% of the candidates typically do just that, and during "Hell Week" the bell rings with disturbing frequency.

Midway through Havlik's Hell Week experience, he was miserable. He was sleep deprived, physically exhausted, wet, and shivering cold. Most of the training is spent in the frigid waters of the Pacific ocean. Havlik whispered to one of the other candidates that he was ready to ring the bell. But before he could, one of the officers pulled him out of the exercises and said, "Havlik, get your ass over here. It has come to my attention that you're going to ring the bell. Why?"

Havlik explained that it was just too much. He didn't have what it takes, and that he just wanted to be warm. The officer looked at him sternly and said, "Don't make a decision in 30 seconds that you will regret for the rest of your life. Stop thinking about your goddamn self and start thinking about your team." Then the officer said that he was going to pour himself a cup of coffee and when he came back he wanted Havlik to give him his final decision. When the officer came back, Havlik just said two words: I'm in.

While you and I might not be badass like a Navy SEAL, certainly we can relate to wanting to give up when the work gets really hard. When faced with hardship, when the project we might be leading is going south, or when we're tempted to compromise our character and integrity for some relief from pain, ringing the bell is easier than doing the right thing and sticking it out. But, as Captain Havlik's story suggests, ringing the bell is not just the easy choice, it's the selfish choice.

The next time you're tempted to ring the bell, stop yourself and think, will doing the easy thing now cause me to carry regret forever?

Ultimately being a leader means putting the needs of the team above your own. You do that by enduring through hardship, focusing on the people you're leading, and not ringing the bell. Doing those things is your best shot at becoming a badass leader. 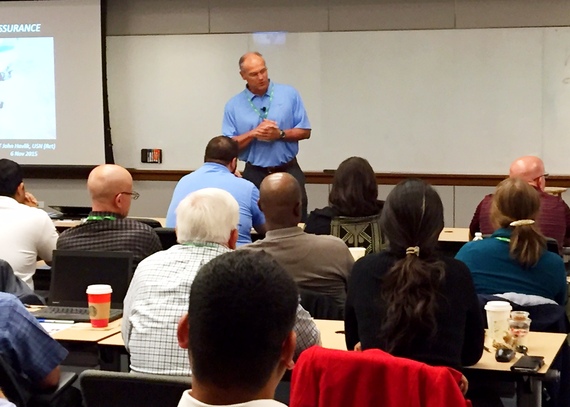 Bill Treasurer is the founder of Giant Leap Consulting, and the author of numerous books including Leaders Open Doors. Bill has designed and delivered comprehensive leadership programs for NASA, Accenture, PNC Bank, SPANX, Saks Fifth Avenue, Walsh Construction, and the US Department of Veterans Affairs. To inquire about having Bill work with your organization, contact info@giantleapconsulting.com.