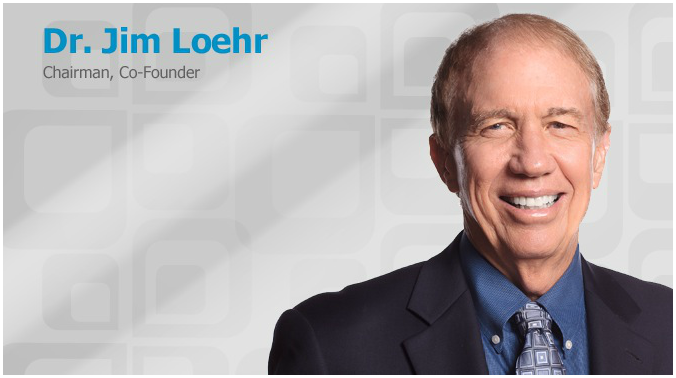 I've had the fortune of meeting, spending time with, getting to know and becoming close friends with some of the world's most "elite athletes" (individuals who are the best in their respective disciplines: behavioral psychologists, chess players, professors, public speakers, authors, philanthropists, business people).

This is a series sharing the top leadership lessons they've INSPIRED which in turn led to ADOPTION, changes for the better, both at work and at home.

WHO IS JIM LOEHR
Dr. Jim Loehr is the #1 performance coach to the "who's who" list of sports, medicine, military, business elite athletes of the world. He has written 16 best seller books including: The Power of Full Engagement, The Power of Story as well as his most recent: The Only Way to Win (2012 top 5 business books).

LESSON: How to find your happiness. (the inspiration)
Jim through all his years of research found a simple formula of how happiness is derived: 50/10/40.

50 percent of your happiness is based on your PAST. How you were raised, your parents, your siblings/friends/etc. -- things that you cannot change. They are in your past.

10 percent of your happiness is based on your PRESENT situation. This was the shocker... only 10 percent. Where you live, your job today, how much money you make, your current relationships be it with family, spouse, girlfriend/boyfriend, friends, etc.

40 percent of your happiness is based on your FUTURE outlook of your own life. Meaning, you can 5x your happiness, what's in your control -- remember the past is done and can't be changed, by changing your future outlook.

This isn't about fortune telling or magically changing the future, but this is about recognizing that we all have a story in our heads of where we're heading, be it positive or negative. When it is negative, we are SUFFERING. There seems to be no end in sight, all pain with no gain. When our outlook is positive, even though situations in the present may suck, we are SACRIFICING to get to a better future.

The most Common Mistake after hearing this advice: "Oh, I need to be an Optimist."

In prison, you could divide the camp into three groups: Optimists, Pessimists and those who had both.

Optimists died first. They were convinced by Christmas, everyone would be freed. As the days got closer to Christmas and it became clear they would not be free, Optimists started to get ill on or around December 25th. Their physical bodies gave up as their minds fell into despair. They all died from broken hearts.

This is where all the Pessimists say: "That's why I'm not an Optimist." Well, the Pessimists died next. They died a slower miserable death, they were convinced they would never get out. They all died eventually.

Only those w/ both optimism and pessimism survived: "..have faith but confront the brutal facts of reality." They believed that they would prevail. That this experience will be the defining event of their lives. However they were grounded in the reality of the current situation and worked hard to take care of themselves.

"So you say: Ugh... now I need to work really hard in the present while also focusing my mind on the future - that sounds terribly difficult --- and indeed it is."

Admiral Jim Stockdale led the largest number of POWs out of Vietnam. The survivors believed they would prevail but they were also grounded in their harsh reality and committed to the hard work of survival. This is what later became the Stockdale Paradox.

Going back to Jim Loehr...he once said: "You're working hard, sacrificing your body, your family, your everything because somewhere in the future, you will find nirvana, this perfectly happy place where your life is balanced, optimized...well WAKE UP, tomorrow is going to be just like today. Nothing will change."

Tomorrow is just like today. Start to make your changes NOW.

ADOPTION TOOLS (to increase your happiness)
Part 1: Your future outlook, the story you tell yourself...write it down, talk it out with your TP (talking partner) and change it.

Part 2: Your present situation impacts your future outlook. Start your 2 inches of moving to your optimal future..TODAY.

I hope this lessons both INSPIREs you and helps you ADOPT changes in your life to increase your happiness.

Charlie Kim is Founder & CEO of Next Jump, a technology company headquartered in New York City. What sets Next Jump apart is their culture and focus on human capital, defined by: Better Me + Better You = Better Us. Follow Charlie on Twitter @CharlieYKim