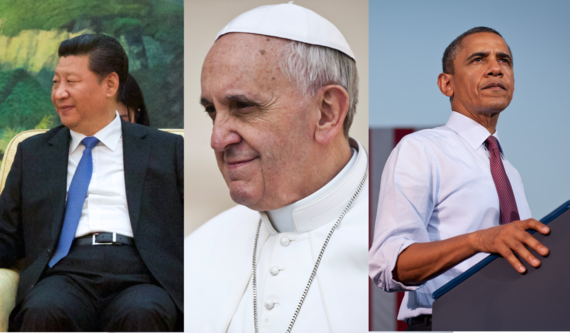 China President Xi Jinping and Pope Francis both made history this week with bold actions on climate change, showing the kind of leadership required to tackle this tough challenge.

The world needs more leaders and institutions to step up and make courageous decisions if we're going to effectively address climate change now. We need collaboration across all sectors and cooperation among people with different views.

And we need less emphasis on criticizing and finger-pointing and more on finally getting greenhouse gas reductions underway.

There's a long road ahead, but I'm optimistic that the kind of leadership we are seeing this week will help us break the climate change logjam.

President Xi announced today a national cap-and-trade program that will begin in 2017, providing the world some good news and momentum ahead of December's United Nations climate summit in Paris. The program builds off the important emissions agreement President Xi and U.S. President Barack Obama forged in November.

China's cap-and-trade program is an important and tangible first step toward making good on the country's climate promises. Further, the initiative is a powerful endorsement of comprehensive, market-based approaches for reducing greenhouse gas emissions at low cost. It's especially cool to see this kind of market-oriented breakthrough happen in China, of all places.

President Xi's and President Obama's leadership on this issue is critical for showing the world that the globe's two largest emitters are willing to work together and take specific steps to reduce emissions.

As Pope Francis tours the U.S. this week, he's stepping out of a pope's traditional duties to call on the U.S. to embrace its role as a leader on climate change.

Please note that as legislators and presidential candidates in the U.S. continue to debate the issue -- sometimes in harsh ways -- Pope Francis was careful not to vilify or criticize those who disagree with him. Rather, in a kind tone and with respectful words, he encouraged the U.S. -- and the world -- to set aside differences and come together to take care of our common home and of one another.

And this summer, Pope Francis became the first to write an encyclical on the environment, framing climate change as a moral issue.

Writing an encyclical on climate is not in a pope's normal job description. But that's what leaders do -- they look for opportunities to step up in order to make a difference.

But -- better late than never -- he has accomplished much during his second term, making climate change progress part of his legacy, even while facing significant challenges on Capitol Hill.

Most notably, President Obama this summer released his Clean Power Plan, which, by 2030, will cut power plant emissions 32% from 2005 levels. It's the first-ever national standard limiting carbon pollution from power plants, our country's largest source of emissions. And it allows states the flexibility to meet targets in market-based, low-cost ways.

President Obama's achievements also include successfully working with President Xi about emissions reductions in China and pushing other countries to take action before December's climate summit, seeking to pave the way for a global agreement.

Through these important leadership steps on climate, President Obama has elevated the U.S. as a global example and is helping unite countries worldwide around a common goal -- protecting the earth we share.

Meanwhile, states and communities across the U.S. also are stepping up and taking a leadership role on climate.

For example, through a regional initiative, 10 New England states cut their carbon emissions in half. California -- the world's eighth-largest economy -- capped emissions. Twenty-eight states instituted renewable electricity standards that are making wind and solar prices competitive with fossil fuels. The list goes on.

Conservatives often support renewable energy and energy efficiency policies because they create economic development at home, empower consumer choice and reduce utility bills. These benefits complement the environmental movement's goals. Leaders across the country are figuring out how to find common ground.

In Georgia, for example, solar legislation failed for years. But unlikely allies -- Tea Party Republicans and the Sierra Club -- recently worked together to expand consumers' energy choices through solar legislation.

It doesn't have to be all or nothing. As state and local leaders have demonstrated, we can meet people where they're at and collaboratively develop win-win solutions.

Although significant challenges remain, bold leadership is smoothing the path for progress. Leaders of many nations are making tough -- but necessary -- decisions. Global influencers are calling for change. Local leaders are making headway and finding common ground.

I'm optimistic the world can continue building off of the momentum created by this strong leadership. We can find -- and embrace--solutions that will equip us to successfully tackle the climate challenge.

To be sure, we have a long way to go in our efforts to address climate change. But let's be encouraged by all of this week's good news -- important progress is underway. Onward.

Mark Tercek (@MarkTercek) is the president and CEO of the Nature Conservancy and author of "Nature's Fortune."