Books about leadership tend, like self-help books, to deal in truisms, textbook terminology and a pious, sometimes naive idealism that makes you want to cry out in frustration: "Yes that sounds great on paper, but that's not the way it works in the real world!" In a world ruled by Machiavellian skepticism, volunteer "change agents" crossing "boundaries," say from Turkey into Syria, to better understand the "narrative of the other" are targeted and killed. Leaders we read about in the news, be it Vladimir Putin, Benjamin Netanyahu, or John Boehner, are less interested in finding common ground with opposing groups than they are in stomping them into the ground. The resistance of reality plays out in everyday life too, outwitting would-be innovators in most fields, from imaginative school superintendents to disruptive CEOs.

Dean Williams, author of Leadership for a Fractured World: How to Cross Boundaries, Build Bridges and Lead Change, is an idealist who has set out to embrace the challenges of the real world. A faculty member in the leadership program at Harvard University's Kennedy School of Government, Williams has spent valuable time in the field. He served as an adviser on reform and development initiatives for the governments of Australia (where he was raised), Singapore, Nigeria, Brunei, East Timor and Madagascar (where he was chief adviser to the president) to name a few, as well as assisting corporations and other organizations. One of Williams' goals, he has said, is to bring "full reality" into the classroom and the field of leadership. 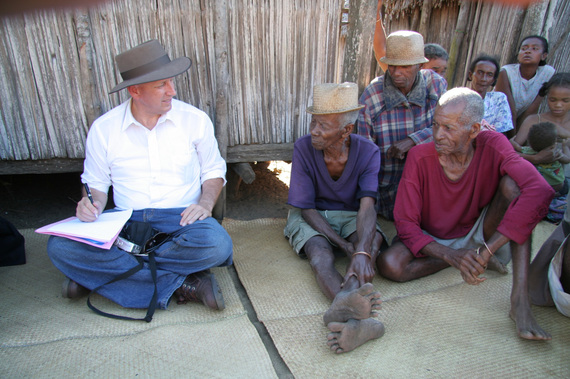 In his first book, Real Leadership: Helping People and Organizations Face their Toughest Challenges, Williams wrote: "Real leadership gets people to confront reality and change values, practices and priorities in order to deal with the real threat and the real opportunity the people face." It's a general aspiration which calls to mind thorny issues on many different levels such as the intractability of climate change deniers, the often violent antagonism between Shiites and Sunnis, or the long-winded debate between charter school advocates and public school defenders. Can new leadership theories help us out with all of these?

Williams hopes so. He joins other theorists in the field who have largely abandoned the old, heroic command and control models of leadership -- the "think positive, get the team on board and move ahead" mindset so ingrained in American culture and that some believe is actually part of the problem. Leadership traits like "showing conviction," "providing a vision," and "generating followers," they argue, are variable skills dependent on context and circumstance. These traits can backfire, encouraging more authoritarian, solipsistic types of leadership. Williams mentions grandiose bullies like Muammar Gaddafi and Robert Mugabe who serve primarily to reinforce group boundaries, "tribal" behavior and interests that are resistant to change.

A follower of Ronald Heifetz, Founding Director of the Center for Public Leadership at the Kennedy School, Williams has been teaching and writing about more nuanced, "adaptive leadership" theories. These contemporary concepts of leadership, developed by Heifetz, rely less on notions of a charismatic visionary and emphasize the need for leaders to correctly diagnose the situation at hand. They distinguish between technical managerial problems and skills and the deeper "adaptive" needs created by increasingly complex, interdependent, and quickly evolving modern societies.

No one "big man" leader or isolated group, Williams argues in his new book, can resolve the multiple challenges (institutional, economic, political and environmental among others) of an increasingly fractured, and divisive world. What we need, Williams says, are "global change agents" who can mobilize people to cross, "bust" and transcend the boundaries that separate groups. Leaders who reach out and build bridges of understanding and common interest.

Williams singles out the work of United Nations diplomat Sérgio Vieira de Mello as an example, among others, calling him the embodiment of a global change agent.

Vieira de Mello became well-known in the international community for leading the successful UN rebuilding efforts in Lebanon, Cambodia, Kosovo and East Timor after those regions were traumatized by violent conflict. He was the UN Special Representative to Iraq when he was killed by a terrorist suicide bombing in 2003.

Samantha Power, in her biography of Vieira de Mello, described him as "a very shrill idealist" who became a "Machiavellian idealist" (see article by Richard Gowan). He was, by most accounts, a man of the world, a practitioner of realpolitik, who knew how to work both sides, dealing with the likes of the Khmer Rouge and the accused Bosnian Serb war criminal Ratko Mladić. Vieira de Mello patched up old wounds, found common ground between warring parties and seized incentives to bring people together. In Iraq, Williams tells us, no one knew the various political and religious factions, the ground-level policing problems and economic circumstances better than he. But in 2003, when Paul Bremer was sent by President George W. Bush to Iraq to oversee the transition to democracy there, he hardly consulted with Vieira de Mello, the one man who had the experience and know-how to help him.

In Williams' terms, Bremer was a well-intentioned novice with little expertise as a leader and less than in-depth knowledge of the country he was supposed to be pointing in the right direction. He had no experience in overcoming conflict. He did not fully understand the Iraqi sectarian narratives or the stakes involved. And, Williams writes, he regarded the UN and its special representative with suspicion. Within a few months, Vieira de Mello was dead and Bremer had outlawed the Ba'ath party and dismantled the Iraqi army, unwittingly setting the spark for the horrendous conflict that continues to this day.

This illustrative example and others like it -- incidents of real-world leadership triumphs and missed opportunities -- will be most compelling for the general reader. Primarily, though, Williams' book serves as a lucid and patient guide to the would-be change agent. Much of it is devoted to diagnostic skills, breaking down the tasks at hand: understanding the stakes involved in a conflict; identifying cultural and ideological currents and "maladaptive" issues; understanding another group's narrative; forecasting the costs and possible sources of resistance and so on. A study guide is provided at the end of each chapter for students and professionals alike.

Seasoned leadership experts may find some chapters repetitive and not necessarily novel -- there is no discussion of "complex" adaptive system dynamics and other current leadership concepts one finds expounded upon in books and on the internet. But there is theory enough for the layman in this book.

Indeed, we can hardly fault Williams, if, on occasion, he indulges in the jargon and lofty sentiments endemic to the field (the foreword is written by the Dalai Lama and there's a concluding chapter with quasi-spiritual advice for individual self-preservation). After all, it's hard to imagine teaching leadership without a dollop of optimism. At least Williams, to his credit, is not afraid to cite Niccolò Machiavelli alongside Nelson Mandela. He is an eminently sensible man with a lot of smart, practical advise up his sleeve about how leadership can be achieved.