A group of midwives recently questioned whether transgender, genderqueer and intersex individuals should have access to midwifery care. They assert that gender-inclusive language threatens women. I wrote a blog post attempting to claim a middle ground between gender inclusivity and feminism in midwifery. I am a gay, transgender man and I am a feminist. A vicious response by a lead midwife from the group Woman-Centred Midwifery was posted and then deleted later in the day. Have no fear, I obtained a screen capture of it so we can all read it and discuss.

Here's a quick synopsis of the issue: The Midwives Alliance of North America (MANA) formerly referred to clients as "women" and "mothers," but in 2014 changed some (but not all) language in its core competencies document to refer to "pregnant people" and "birthing individuals." On August 20th, a dissenting group of midwives calling themselves "Woman-Centred Midwifery" wrote a letter to MANA protesting what they termed the "erasure" of the word "woman" from the documents.

I proposed that organizations like MANA can and should continue to use the words "woman" and "mother" in addition to gender neutral terms like "all birthing people" or "people of all genders." There can be respect for women's struggles against patriarchy and inclusivity of transgender, genderqueer and intersex individuals at the same time.

In response, Mary Lou Singleton, the first signatory on the Open Letter to MANA, wrote a comment on my blog post that is the most bizarre and hostile piece of misinformation I've ever seen. Her opinion about transgender people is made abundantly clear by her use of terms such as "medical mutilation" and "gender industrial complex."

But there's still more. Ms. Singleton asserts, "Male-to-trans billionaires pour millions and millions of dollars into promoting transgenderism, while simultaneously funding horrific anti-woman politicians and initiatives." Yes, it is true that there is one trans billionaire in the world. She doesn't represent all trans people, who in general face high rates of poverty and are frequently victims of violence. I love a good conspiracy theory as much as the next person, but painting one of our society's most oppressed groups as the oppressors is not only far-fetched, it contributes further to the transphobia and discrimination we already encounter.

As the first signatory on the Open Letter to MANA, I assume that Ms. Singleton must have a good deal to do with the motivation behind it. I fear that we have now seen the true colours of this particular "woman-centred midwifery" group -- hateful yet utterly confused. I hope that others who signed will carefully consider the implications and will withdraw their support of such a brutal ideology.

Many thanks to Sion Jesse for providing this screen capture: 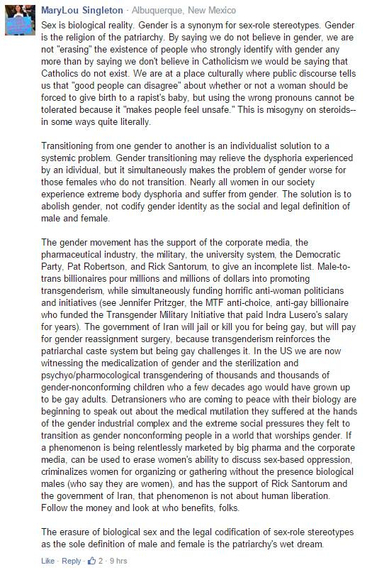