The World Bank's framework for assessing, preventing, and mitigating social and environmental impacts caused by its projects is currently under review. For the past three years, Bank officials, governments, civil society organizations, and communities have given their input in debating and redrafting the Bank policies responsible for protecting communities and the environment. In a confidential statement to the Bank's Committee on Development Effectiveness, submitted a month before the second safeguards draft was made public, six Executive Directors (EDs) of the World Bank expressed pointed criticisms of the Bank's proposed new draft policies.

The major criticism relates to human rights. While to the layperson it might seem obvious that the World Bank would support human rights, or at least do their best to avoid rights violations, the Bank is notorious for evading use of the rights word in its policies. This aversion has persisted despite decades of evidence of egregious human rights violations resulting from Bank-funded projects. Earlier this year, a major media investigation found that the Bank had physically or economically displaced 3.4 million people over the last decade and exposed many cases where poor and vulnerable communities had suffered extreme distress and human rights abuses as a result. In fact, the head of the World Bank's private sector lending arm, the International Finance Corporation (IFC), announced he will step down amidst allegations of human rights violations in the IFC's projects.

The EDs behind this statement, representing United Kingdom, Italy, Germany, France, the Netherlands and the Nordic and Baltic representative, took a stance on the controversy surrounding human rights at the Bank. They write that "it is very much the responsibility of the Bank to ensure that its operations do not violate human rights." While stronger arguments could (and have) certainly be made by human rights advocates, this statement coming from six of the twenty five Bank EDs - who together hold quarter of the shares - should not be taken lightly. 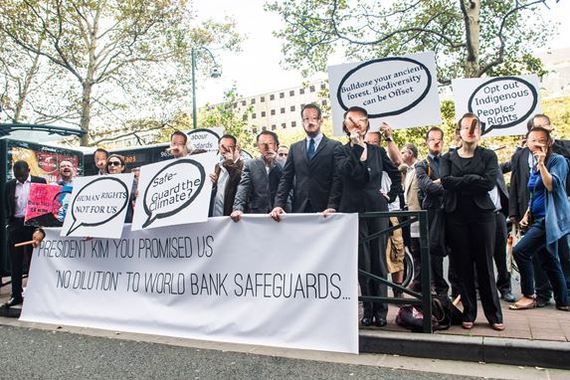 Secondly, the statement takes up the issue of transfer of responsibility for safeguards from the Bank to governments. The current safeguards draft has been widely criticized by civil society and governments alike for shifting responsibility for monitoring and enforcing safeguards policies increasingly towards borrower countries. While this is intended to increase local sense of ownership and independence, countries are not all equally capable of ensuring strong safeguards implementation. Moreover, the Bank has not explained clearly how this transfer of responsibility will work in practice, or how much money it will cost - a vital issue for developing country governments. The EDs use strong language in arguing that "it is fundamentally the Bank's responsibility to ensure that it is able to deliver on the requirements of its own policies" - in essence, responsibility for environmental and social harm caused by World Bank projects lies with the Bank.

These concerns align with much of the feedback given by civil society organizations throughout the safeguards review. However, participation in the review process itself has been fraught with difficulty for civil society members, due to barriers like exclusive registration, limited preparation time, and geographical barriers. As well as its criticisms of the draft itself, the EDs emphasize that the next round of safeguards consultations must be inclusive and diverse, ensuring that an "appropriate range of stakeholders," including civil society representatives, can engage. They also encourage use of "real-life case studies" in consultations.

At a time when the World Bank is poised to increase its investment in fragile and conflict states, and return to its bad old ways of lending to mega-projects like big dams and infrastructure, strong safeguards to ensure the poorest and most vulnerable don't pay the price are more important than ever. If the World Bank Group is genuinely committed to Dr. Kim's promise of "no dilutions" of environmental and social standards, listening to the EDs' concerns - and those of civil society - is crucial. Avoiding human rights violations and taking responsibility for the impacts of its investments would be a good start.