The deaths of at least 26 psychiatric patients, from hunger and cold, at Havana's Mazorra psychiatric hospital, the death of the hunger striker Orlando Zapata Tamayo, the ongoing hunger strikes by Guillermo "Coco" Farinas and others, the attacks on The Ladies in White as they commemorate the 7th anniversary of the "Black Spring" jailing of 75 independent journalists and writers, continue to resonate across Cuba. Today's guest post is from the blogger Claudia Cadelo's, and reports on the ongoing impact of these events.

Is Life Sacred In Cuba?
By Claudia Cadelo

These words of Arlin Rodriguez, from the TV talk show The Roundtable on March 17, thundered in my ears for half an hour. A few days ago I had access to three hundred photos of the autopsies of those who died at the psychiatric hospital in Havana and I cannot imagine how that phrase came out of the mouth of a journalist.

When I opened the little folder called "Mazorra" a series of monstrosities hit me in the face and I couldn't stop looking at the cruel graphic testimony. A friend who is a doctor visited and while he analyzed images I didn't have the courage to look at, expressions like, "Holy Virgin Mary, Blessed God, What in God's name is this?" issued from his outraged throat, mixed with obscure pathologies and the names of diseases both treatable and curable.

Enormous livers, tubercular lungs, and wormy intestines are the proof, Senora Arlin, of the sacredness of life in Cuba. Meanwhile The Roundtable throws a fit because the death of Orlando Zapata Tamayo has unmasked a crumbling public health system, and they try to cover up the disgrace of a seeing soldiers dragging and beating a group of women dressed in white with flowers in their hands. I ask myself, Gentlemen Journalists, when will they explain to Cubans the reasons why twenty-six mentally incapacitated people died in inhumane conditions during their confinement in Mazorra?

Note: I publish this photo with a completely clear conscience; if they were not shown there would be no proof of the suffering that these people were subjected to. If not for the hard photos that denounced the Nazi Holocaust, the genocide of Pol Pot or the tortures in the prisons of Abu Ghraib, they, too, would not have existed. 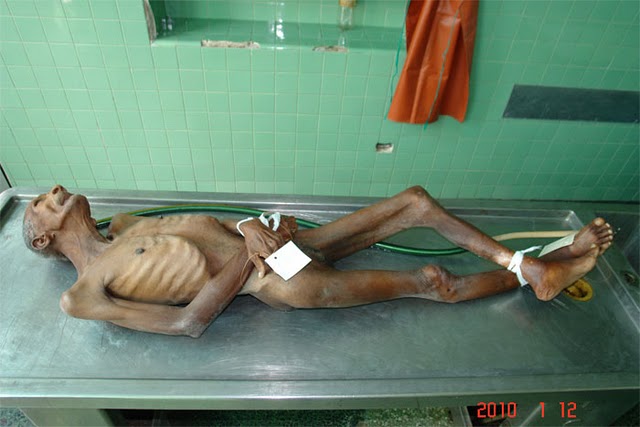