In an interview last week with NBC's Brian Williams, NSA secret-leaker Edward Snowden set himself a low bar and claimed success: His leaks, he said, have gotten us talking about these important issues. Mission accomplished? Let's think about that... 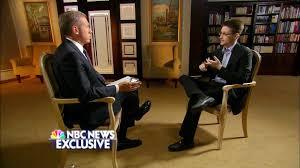 While Snowden has in fact displayed several admirable leadership qualities - like taking bold action, operating in integrity with his stated beliefs, and communicating (to Brian Williams, anyway) with gravitas - he, like many would-be-good leaders, has fallen short in the results department.

Good leadership takes balancing cost versus benefit to achieve something. The measure of such a costly breach of national security as Snowden committed, then, should be significant positive change, rather than fresh fodder for our hapless Congress and paying NBC's bills for a few news cycles.

For example, could there follow from all of this, say, a thorough and unbiased audit of our intelligence services showing specifically if, and in what ways, the US Government discarded its checks and balances and/or hindered our constitutionally-guaranteed protections and freedoms? Such an audit could then result in positive reforms.

Similarly, for the US Government to be the leader here, it would need to show, rather than simply assert, that Snowden's admittedly criminal actions have created harm, and also show that it has used its powers in strictly constitutional ways.

Neither will happen. Instead, Snowden's sensational actions reflect the naivety of an ideologue: Someone intensely devoted to a cause, yet guided more by the image of perfection than by the real world. This "national conversation" is more likely to fester and fizzle than to lead to policy reform -- after all, that's the status quo state of the union these days.

Whether he was a patriot or a traitor in leaking NSA secrets is a dumb question being asked by smart people in the media who know better, but need to sell cars and paper towels. Patriot or traitor? He is, as are those in government guilty of "overreach," both and neither. The two sides here are more alike than not.

I'm not suggesting that whiste-blowing isn't important to our democracy -- it is. Nor am I saying it's Edward Snowden's responsibility to make any needed changes. Yet if something productive beyond dialogue is to come of this, then we'll need actual leadership.

That's the challenge when it comes to the dark arts of intelligence. We can't and shouldn't ever know what great leadership looks like when it comes to the content of collecting and analyzing intelligence to prevent violence and terrorism. Yet if Snowden's actions are to be seen as good leadership, then bring it on, Snowden: Let's see the benefits that more than cover the costs of what you have done.