Nestle issued a voluntary recall for some Lean Cuisine ravioli dishes Friday after three consumers reportedly found glass fragments in the food, according to a press release from Nestle. None of the customers were injured.

The voluntary recall applies to 501,816 Mushroom Mezzaluna Ravioli dishes produced in early November, Nestle spokesperson Roz O'Hearn told The Huffington Post. Nestle had distributed them nationwide. The ravioli dishes in question have production codes of 2311587812 and 2312587812 and a "best before date" of December 2013, according to the press release. Customers can find the production code below the ingredient list.

(SCROLL DOWN TO SEE A PHOTO OF THE DISH)

"We apologize to our retail customers and consumers and sincerely regret any inconvenience created by this voluntary product recall," Nestle said in the press release.

Nestle has asked customers with the recalled dishes to not eat them and instead contact Nestle customer service at (866) 586-9424 or leancuisine@casupport.com. Nestle says they will reimburse reporting customers with a replacement coupon.

"This is an unusual complaint for us because we don't have glass in our factories. We have a no-glass policy," O'Hearn told HuffPost. "We are very committed to food safety."

This is not the first Lean Cuisine recall. Nestle recalled some Lean Cuisine spaghetti with meatballs in 2011 because some customers had found bits of red plastic in their meals, according to DailyFinance.

Check out the recalled ravioli below: 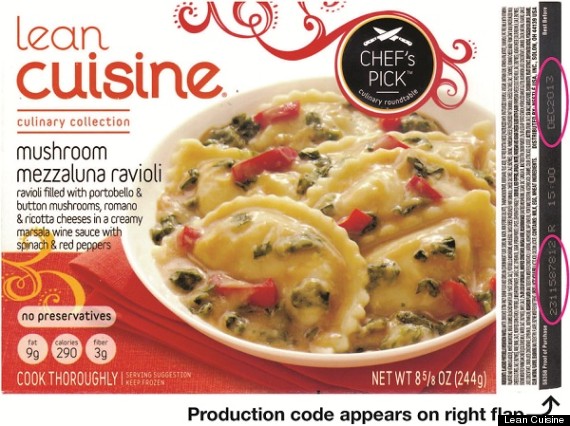