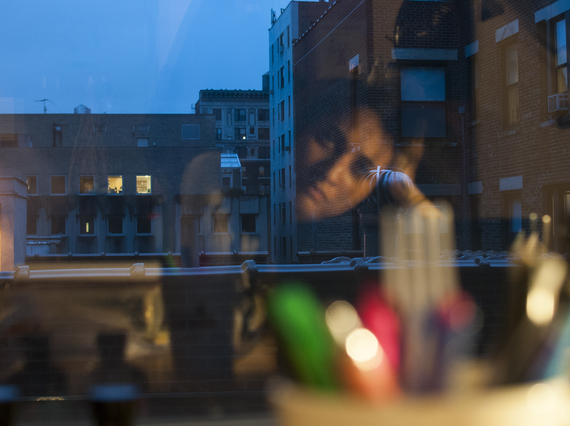 I did everything right. I soaked up my mom's feminist ideals. I read Lean In. I chose to attend a women's college. I minored in women's leadership (Literally. As a scholar at Barnard's Athena Center for Leadership Studies, I have a special designation on my transcript). Yet, when it finally came time to lean in, I fell flat.

Earlier this summer, I found myself in an uncomfortable conversation with a supervisor about the value of my work at the startup where I work part-time. Although I had an independent fellowship funding 35 hours a week of work at two unpaid internships, early on, I sensed a silent expectation that I put in extra hours at the startup.

As an intern, compliance seemed to be my only option, but, as a Barnard student, silence in the workplace had never been part of my curriculum. In fact, I had been educated to do almost the exact opposite even before setting foot in a Barnard classroom. As Sheryl Sandberg instructed my predecessors in her 2011 Barnard commencement address, we need women at all levels "to make sure women's voices are heard and heeded, not overlooked and ignored."

With this in mind, I spontaneously decided to lean in, communicating to my supervisor my discomfort with a work arrangement in which I did more work without compensation for the value added by this work. And, rather surprisingly, we could not come to an agreement on this.

For the rest of the day, I wondered what had gone wrong. Sure, I hadn't prepared much for my negotiations, but I had followed the expert advice of Linda Babcock, who co-authored Women Don't Ask: Negotiation and the Gender Divide. Furthermore, I had reached an impasse with a woman who, ironically, had given me kudos for "leaning in" to get the job in the first place.

But I tripped onto something that day. Women are now the majority in the classroom (even those outside of my women's college), which is allowing us to cultivate our ambitions more than ever before. Yet we are still ultimately finding ourselves in unwelcoming workplaces that increasingly promote overwork and take pride in their pay-your-dues-like-we-did model. This leads to frustration for young women, like me, who are looking for support beyond what the new "career women self-help" canon can provide.

A 2014 study by Bain & Company found that women who experienced a drop in their aspirations two years into their careers also experienced drops in perceived support provided by their supervisors, suggesting that "leaning in" is not a singular act: it takes a team for young women to successfully lean into their careers.

The challenge becomes that not all more seasoned colleagues are ready to hand off the baton and let young women spring past all the obstacles that they had to stumble through in order to get to the top. Furthermore, leaders like Sandberg have shifted the onus to attract the support of older colleagues onto young women. In Lean In, she writes, "We need to stop telling [women], 'Get a mentor and you will excel.' Instead, we need to tell them, 'Excel and you will get a mentor.'"

I recently found that my own mother, when faced with a situation eerily similar to my own, had a response along these lines. In my mom's case, a newly-hired colleague had attempted to ask her for advice about rising up in their company, instantly rubbing my mom the wrong way.

"This is a problem that a lot of people have with your generation," she said to me later. "Why was she asking advice about her next job when she just started this one? Maybe she should focus on doing this one well first."

In retrospect, I could not see either of these women as completely at fault. I agree that my mom's young colleague was premature in her inquiries, just as I had been in my negotiations. But I also recognized that she too was trying to lean in as she had undoubtedly been instructed to do. My mother, who has always been my strongest advocate, could have in turn recognized that and answered her questions, while also guiding her on handling these types of conversations in the future.

I am ambitious and willing to work hard, as I know many in my generation are. But advising us to grow our ambitions isn't going to make the workplace more hospitable to those ambitions. Changing the workplace in this way will truly be a team effort, transcending what I alone can do as a new hire.

In her Barnard commencement address, Sandberg also told the graduates "we will never close the achievement gap until we close the ambition gap." In order to close the ambition gap, however, those who already hold positions of power, and are frustrated with the lack of young women excelling at work, will have the next move, guiding us as we take our first steps into the workforce. After all, they are the baby boomers and Gen Xers who raised us and saw us fall flat a hundred times before we hit our stride.