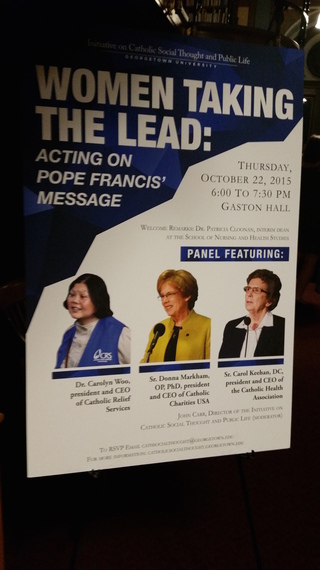 There were questions about Pope Francis' visit to the US and about women's leadership styles, but what was most riveting were the answers to a very personal question: what encounter with someone in need has most affected you?

Last night Georgetown University's Initiative on Catholic Social Thought and Public Life hosted three remarkable leaders: Sister Donna Markham, Executive Director of Catholic Charities, Carolyn Woo, CEO of Catholic Relief Services, and Sister Carol Keehan, CEO Catholic Health Association. Each is a pioneer and something of a force of nature in her own right. Together their experience and inspirational comportment convey a challenging example of what women are achieving and what it takes to do so. They suggests that indeed there are distinctive facets of women's leadership philosophies and practical approach and explored the different ways in which it is linked to their faith. It was striking how often the word grace entered into the discussion. Indeed, each in a different way, these three women exemplify grace. Yet with every breath they display a down-to-earth, day-to-day challenge to their work that centers on serving those in need.

Sister Donna is the first woman to head Catholic Charities, in over a hundred years. It serves over nine million people in need. A psychologist by training, her counsel for leadership (and a lesson she took from the Pope) is: don't be afraid. Carolyn Woo heads one of the largest and finest of non-profit organizations, CRS, that works across the world. Her message focuses on hard work and excellence. She was not coddled and does not coddle others, because if you believe in someone your expectations are high. Carol Keehan, asked how she is taken seriously in a very male world, highlighted competence, a commitment to the whole (as opposed to self), and collaboration as a centerpoint of style. She also commented that it helps to have brothers, offering some insight into how men see the world.

The kind of leadership that these three very different Catholic women exemplify is thus eminently human but plainly driven by a set of values that they link to their faith and to the example of Jesus Christ. The image of a compass (not one they used) came to my mind. Their determination and focus on "results" is not articulated in classic business terms, though each clearly has strong business aptitude, but in the needs of people who suffer and are in need. You cannot, they said, be shaken or deterred in what you are doing by criticism. You must do the right thing. Self-criticism? Yes indeed. And listen to criticism. But again, respond with grace and courage but do not be deterred from what is right.

A question about finding ways to question and explore doubts elicited a fascinating response. Indeed there is a need in our turbulent and contentious world to find true safe spaces, where there is trust and where you can test ideas and express deeply felt concerns. Create those spaces, if need be, to discuss issues that matter: not whether you should serve pork or chicken, but topics where you feel pain and where answers are far from clear. What matters is that trust and grace allow you to be private and safeguarded. One woman referred to a "safe space" discussion over two decades ago, where the women involved reached a resolution to the problems they wrestled with and where not a soul among them has ever spoken outside the group about what was discussed.

The answers to questions about feminists versus religious women and women's positions in the Catholic Church (including ordination) were honest and searching. Sister Carol came back several times to the reality that many million women have no capacity to control their lives and their bodies. In exporting the wonderful things about the feminist movement, it is important to take the best of feminism and the best of the Church, by implication leaving aside what may not be best. None of the three expect to see ordination of women in the Catholic Church in their lifetime but highlight the remarkable work that Catholic women are doing as an inspiration.

Each of these remarkable women spoke movingly about a personal encounter with someone in need, and, strikingly, in each case it prompted self reflection even as it moved them. Carolyn Woo told of an encounter with a homeless man and her instinctive reaction against a hug: why did she react that way, she asked herself? Sister Donna marveled at the generosity of a homeless man who helped her when she lost her way on Christmas Eve in Detroit, again asking herself if she would have offered as much help as someone who had so little had done. And Sister Carol spoke of someone in the Philippines who was helping others after a typhoon disaster, and told, when asked, of his deep pain after his child swept from his arms.

These three remarkable women, inspired by faith, are a true inspiration for what they do and what they achieve, and for the grace with which they carry their responsibilities to care for others.