She received a fake $100 bill from a Walmart in Alpine Township, Mich., and the store refused to replace it, according to reports.

Now Ward is out the entire amount, just a month after Ward, her fiance and her 14-year-old son scraped by on $200 in disability plus food assistance, News 8 reported.

SCROLL DOWN FOR PHOTO OF THE BILL

The story emerged just days after Julia Garcia of Texas filed suit against Walmart for humiliating her over alleged counterfeit money. Employees tore up two $100 bills because they thought the money was counterfeit, she said. Turns out they were legal tender.

In the Michigan case, Ward used her state assistance Bridge Card in a transaction at Walmart, and received $100 back. But when she tried to use the bill to buy home supplies at the Menards store next door, the cashier detected the bill was counterfeit with a special pen, News 8 reported.

Ward returned to Walmart to exchange the bill for a real one, and the store refused to replace the currency because she had left the building, reports say.

Although the arrival of a Social Security check has eased her budget concerns a bit, she's still worried: "We have to do without now," she told the TV station.

So just how do you detect counterfeit dough to avoid Ward's predicament? According to Secret Service.gov, telltale signs of funny money include when the red and blue fibers appear printed on the paper rather than genuinely embedded in it, and when the portrait is more "lifeless and flat" than the vivid real deal. 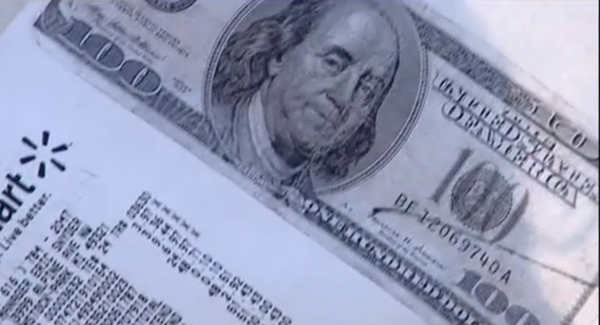 Check out some other nightmarish stories that involve Walmart:

Nightmares That Involve Walmart
More:
walmartMoneyCounterfeit Moneywalmart fake moneyVideo
Newsletter Sign Up
The Morning Email
Wake up to the day's most important news.
Successfully Subscribed!
Realness delivered to your inbox