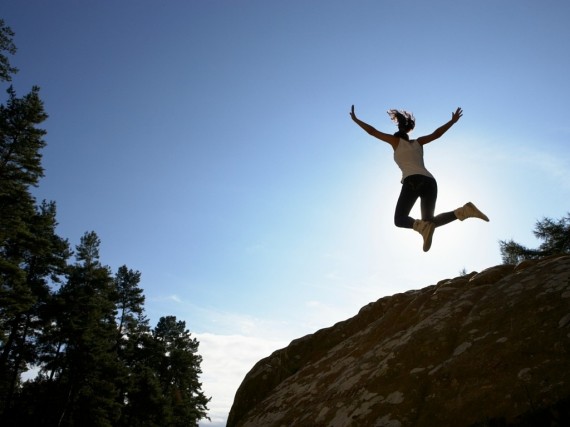 I recently had the opportunity to talk with a woman who is one of the leapers: those of us who have left the security of a corporate job in pursuit of starting our own company. In her case, the motivation was strong. Her corporate job meant she was only able to spend 15 minutes a day with her infant son - not quite how she and her husband had imagined family life.

She told me how the decision to venture out on her own was easier because she was blessed with a supportive partner, but how she struggled when her old employer called her up and offered a boss's former position at a much bigger salary than she had been making.

She ended up turning the offer down and opening her own shop, which got me wondering about what drives some of us to do that while others wouldn't have thought twice about taking the corporate carrot.

In my own case, there was a moment, which is crystal clear in my memory. I was talking with the owner of the barn where I keep my horse. I had just applied for a job, which I had not gotten, and was considering taking over my husband's struggling company. Our savings were dwindling and we were raising two daughters, so pursuing a non-traditional path seemed risky - even a little crazy. I was listing out for my friend all the reasons it was a terrible idea. She listened and just said, "Yes, but I don't understand. Why would you not want to work for yourself? Why would this fail?"

And so I leapt, terrified and unsure, but also somehow more sure than I had ever been before. There's something about listening to the inner voice, trusting the instinct that says, "Go ahead. It's going to be okay."

When I talk about my experience in business, it is not with the intention that anyone would ever look to me as an example of the right way to do things. In fact, it is quite the opposite, really. We really had no business plan and no real financial backing. I had never taken a single business course in college, and the only real commodity we had was around our own skills in writing, advertising and video production.

Fast forward seven years and looking back, I've made some enormous and expensive mistakes. I've also learned countless invaluable lessons, grown tremendously as a person and as a leader, have developed a strong network of business connections, friendships and mentors. I have had some amazing experiences that never would have been accessible to me on a more traditional career path.

After all of this, I've become a big proponent of making the leap if you feel called to do so. How can you put a price on living life on your own terms? How will you feel 20 years from now if you realize you let fear stop you from reaching your potential?

It really isn't necessary to have every step of the way figured out. I'm living proof of that. In fact, I think that trying to orchestrate things too much is actually a huge mistake. You also don't have to wait until you think you're ready to jump in to the proverbial lake and swim. All the skills you don't already have can be learned. And a lot of the practical life knowledge that you have already lived will serve you well in your new venture.

If you wait until you've crossed all your t's and dotted all your i's, your ship may have sailed. Sometimes the most powerful words you can say are, "I don't know." Then go and figure it out.

And you'll probably fail. More than once. And that's okay too. It's the part where you pull yourself up, pick up the lessons learned and go and try again that is ultimately going to lead to your great success. So, if you're considering making a leap, I say go ahead and do it, but do it with an attitude of curiosity and fun. Try things. If they don't work out, try something else. Ask questions. Learn. And keep the faith that you have everything you need to make your dreams come true. Because I believe it is absolutely true.