Four boys from Long Island just released a cover of Selena Gomez's "Hands To Myself" today and you have to check it out. Exclusively debuting their amazing cover for The Huffington Post, they managed to take a fun song and make it even more wild than it was before. I got the opportunity to sit down with the guys and discuss friendship, Bobby Darin and what it was like to share the stage with Aaron Carter.

Hey Here's To You. Thanks for the interview! Can you all introduce yourselves and what position you play?

Greg: Hiya! I'm Greg, I play guitar and do a bit of singing.

Stephan: Hi! I'm Stephan Stanzione and I play drums and sing a bit!

Charlie: My name is Charlie and I'm the lead singer, rhythm guitar and keys player.

Mike: I'm Mike and I slappa 'da bass and sing!

I love your dynamic. How did you guys become a band? What was your relationship to each other?

Greg: We pretty much started in early high school. Me and Steph were in another band, so was Charlie. Stephan connected us and then later on I connected Mike!

Stephan: Greg and I are cousins and we were in a band together in middle school. I was always friends with Charlie in school, so once my band with Greg dissolved, I turned to Charlie to start a band.

Charlie: Once we got to high school we decided to jam and wrote some pretty interesting songs, and soon after recruited Greg. We've been together ever since.

It's nice to see a connection between friends stay strong after high school. How was life growing up out in Long Island? What were a couple of fun things that you used to do while hanging out? Were there any venues that you enjoyed going to for shows?

Greg: Life on Long Island was interesting to say the least. At least when you're in a band. 'Cause you can see what the kids in the city are doing and see what the "LI scene" is up to. Figuring out what we were a part of really was kind of hard and we're still trying to do that.

Stephan: It's super suburban, but the city is so close, so you really get a taste of both types of lifestyles if you venture out there. Charlie and I used to love filming little skits for YouTube when we were younger. Greg and I have always shared a deep love for video games and considering we've known each other since we were children, that's all we've ever done together. Back in the day, the main venues for shows we went to were The Vibe Lounge and The Crazy Donkey. We have a lot of great memories of playing and attending shows at both venues.

Charlie: The Crazy Donkey was my favorite venue growing up. I saw Silverstein and Bless The Fall there which was an insane show. I think my life changed after that night and I knew I wanted to play music that had the ability to move people similarly to how I was moved that night.

Mike:Long Island is where it's at! There's so many cool venues in the city like Webster Hall and Irving Plaza. And it's even cooler when you get to play at some of the places that your favorite bands have played at as well.

Great selection of venues my dudes. Who are a couple of your inspirations as artists?

Stephan: We have so many influences, it's not even funny. We all bonded and grew closer because of the love we had for a band called The Fall of Troy. Anyone that knows TFOT and knows us, realizes how wild that is. But specific artists that influence me are MuteMath, Bobby Darin, Vampire Weekend, and many, many more.

Mike: I'm into so many different artists and have learned so much from different artists of different genres, so it's hard to list them all- but to name a few, there's definitely John Mayer, Jason Mraz, Chris Thile (Nickel Creek, Punch Brothers), Paramore, Mayday Parade and many more.

Charlie: The technicality of The Fall of Troy really vibed with all of us, the catchiness of bands like A Rocket to the Moon, and the ability to give you chills like 30 Seconds to Mars all have their places in our music.

I needed to hear the name Bobby Darin in 2016. That's awesome Stephan. This question is open to the whole band...Who are some of your dream collaborations?

Greg: Carly Rae Jepsen for sure. I was talking about this the other night. Or anyone from the last question. They're all mad geniuses.

Charlie: If we could collaborate with Walk The Moon that would be sick. They always write catchy melodies and great lyrics, and I'd love to get an idea of their workflow.

Stephan: I would love to do a track with a rapper. Someone like Childish Gambino, or Anderson .Paak. Hip-Hop is all about the beats/samples, and beats are my specialty. Other than that, a collaboration with Damon Albarn (of Blur and Gorillaz fame) would probably be incredible. 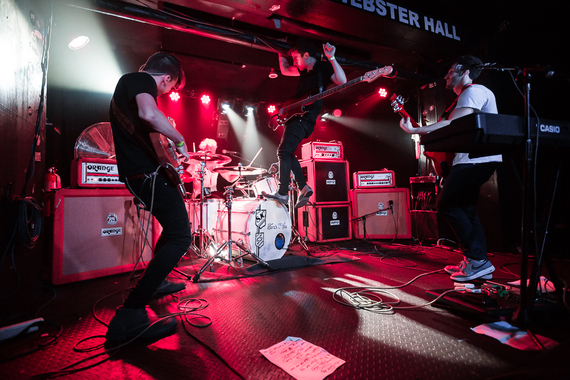 You guys have shared the stage with popular acts including The Click Five and Aaron Carter. Can you guys explain that experience to me?

Stephan: The Click Five show was great because it was at The Vibe Lounge which is pretty small. Everyone in high school was so impressed that we were playing with the dudes that wrote, "Just The Girl." Aaron Carter was even wilder. Who gets to play with the dude who wrote "I Want Candy"? No one, that's who. It was at The Crazy Donkey, and it was PACKED.

Charlie: Going into those shows was really crazy, we've heard these names our whole lives and think they're like superheroes. But then you kinda realize they're just regular dudes who started out similarly to us.

Greg: That was super sick to do. We've had some great shows in the past, especially the festival-type ones like Bamboozle and SXSW. Kevin Spacey was at our last Nashville show.

You know you guys are on to something when Kevin Spacey shows up to your concert. What was the process like recording "Love Me or Leave Me?" It's been about a year since the release of the album. How much has changed in your lives between then and now?

Charlie: "Love Me Or Leave Me" was in the works since we were in high school, so a lot has changed since the release and especially since we began writing it. Our style has totally changed, and we've all developed as musicians quite a bit. But the experience recording the album was amazing. Nashville was amazing, and the crew that helped us were awesome. Getting a feel for the way things are done in a professional studio gave us a priceless experience.

Stephan: "Love Me or Leave Me" is a collection of songs completely inspired and written from our high school experiences. We released the album a bit later on, but LMOLM contains such fun and poppy songs that showcase our youth (not that we aren't still young) and I love it. We've definitely grown up since these songs, but they still hold a special place in my heart. I mean, how could they not? We've literally been playing these songs for the past six or seven years. The songs went through so many changes over the years, but when we finally laid them down at Blackbird Studios in Nashville, it was an awesome, yet grueling, experience. Much has changed since that album, mainly because we've been doing the whole college thing and we're just older. The next album is definitely going to be a 180 for most fans and listeners, but it's still going to contain our pop roots.

We are all looking forward to the next album! For the time being, what do you like the most about doing cover songs from different artists?

Mike: One of the reasons doing covers is so cool is because it helps you reach a really broad audience. Everyone in the audience is into different music, so meeting the listener where they're at is a great way to keep everybody included and excited in our set.

Greg: The surprise that comes to people's faces. Most times it's hard to imagine a song in a rock or indie format if it's not one already. We love flipping songs upside down like that.

Stephan: Cover songs, for us, are one of our specialties. It's so awesome to play these songs that other artists have poured so much time and effort into. When we learn these songs, you can feel and hear all of that effort put into the songs. It's always good to just stay true to the original artist, but it's also awesome when we go a little 'out there' with the covers. But for the most part, having fun with the originality of the song, and adding just a dash of our HTY Spice™ always produces great results.

Speaking of great results, you guys just released your cover of "Hands To Myself" today. Congrats! Why did you decide to release this cover of the big Selena Gomez hit?

Charlie: We decided to pick something that was trending now and thought we could do some interesting things with. We changed up the workflow a bit on this one and focused on the production side first before putting the instruments in our hands, because the original is very electronic based. We took instruments and dug in.

Greg: "Hands To Myself" is mad catchy, and I just love how it sets the mood perfectly with it's sonic canvas and lyrics.

Stephan: Honestly, maybe it's a boring answer, but covering a popular song on the radio is the best! Everyone knows it. It's on the radio for a reason, ya know?

Mike: A group of four guys doing a cover of a Selena Gomez is definitely unexpected, so the shock factor is probably a cool part.

I think listeners will always have an appreciation for the unexpected. Before I let you guys go, what can we expect from the band in the future?

Mike: Some awesome new songs with some fire beats! A lot of cool synth production and collaborations of different genres.

Charlie: We have stuff that's finished and we are really excited to put out one it's recorded, but in the mean time YouTube covers like this and shows are what's expected during the hectic fall season.

Stephan: You can expect a lot. We've been at this for hella' long, and although life throws a lot of junk our way, we're going to keep on truckin'. Expect a new album, a new sound, an ever-expanding live show, and overall, positivity. We're always trying to bring smiles to everyone who listens to us or sees us live.

Greg: That's correct. Thanks a lot brother! We appreciate it. 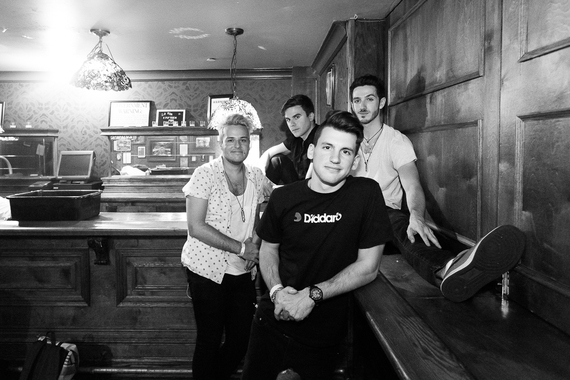