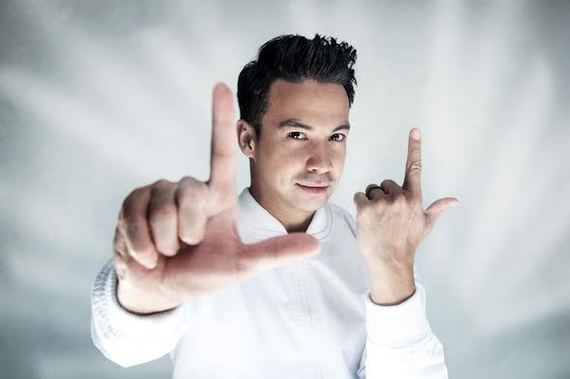 Laidback Luke is counting down the days until he turns 40 years old and you have the chance to celebrate the milestone with the legendary DJ! Luke will celebrate his four-decade existence on the planet at Marquee NYC. Luke's actual birthday is on Saturday, October 22, when he will be rocking the dance floor at Marquee in Manhattan. With his birthday party being a week away, he's hoping to celebrate with as many fans and friends as possible. Although the event is an invite-only affair, a few lucky fans will get the chance to be part of the celebration by winning tickets through the Huffington Post. In an exclusive interview, Laidback Luke told me what he is feeling as he turns another year older.

"Tell you what. It's a very different type of feeling than when I turned 30," Laidback Luke said with a smile. He continued, "When I turned 30...I was very depressed. It sounds a little bit heavy when I say depressed but I can tell you that there's a bunch of DJs who told me that's what I was--one in particular who I met that night when I turned 30. He remembered me being down and I was just getting angry drunk. Like a depressed kind of drunk, you know? I was just celebrating in the corner of the club feeling very old. This time around it is a very different story. I feel really young still, funny enough. I don't really feel 40. I'm at the top of my life. The wonderful thing about turning 40 is the amount of experience that you have that you can utilize. This time around I feel like I need to celebrate it really big. I actually have never celebrated my birthday in a club or anything big. I tend to just spend it with my family. The big 4-0 is going to be a big one for me."

The guest list will be made up of the fortunate fans that win the Huffington Post giveaway and a stellar cast of industry legends, friends and family who have helped to make Luke's 25 years in the game such a huge success. Luke shared intimate memories of when he first broke into the business with me. He said, "I was really young when I got into this game. I remember a few of my first gigs that I played. People at the end of my set would come up to me and say, 'Are you even old enough to be in the club? We really enjoyed your set and you're talented and everything but shouldn't you go home now?' I was this young, up-and-comer and learning a lot along the way. Interacting with other DJs. Learning how to read crowds. Really, I was just soaking in every type of learning experience that I could...Even when I was hitting my burnouts and going through depression. Being an underground star one day then being a mainstream star the next week. Then totally being dissed by all the underground people who were supporting me. There's a lot of stuff. It's been a long, fun and heavy road. Like I said, I still feel very energetic and everything. I think it's wonderful that at this point I can help a lot of young talent and share my experiences. Pretty much any type of question that new talent asks me I have an answer because I lived through it." The DJ has seen and experienced it all. His resilience has established him as one of the kings of the electronic scene. He never forgot his roots and gave credit to the guys who helped shape him into becoming one of the most iconic DJs of our generation.

Laidback Luke started to list off his influences over the course of his long career. "On the producer side, the guys that discovered me were Chocolate Puma. Back in the day they were running this amazingly popular label called Fresh Fruit. They were releasing stuff under their alias called The Good Men. They were a big deal in the Netherlands. Mind you we are talking about the year 1992 here. I just sent in my demo as a 15-year-old kid, they heard talent and then they signed me. To this day, they are my godfathers of producing in the industry," Luke told me. He followed up by saying, "On the DJ side I have a techno background. The guys I really looked up to back in my techno days were guys like Jeff Mills and Dave Clarke. These guys were more like dance orientated DJs. That always kind of stuck with me. Then when I got to spin house music more I looked up to guys like Bad Boy Bill. You also can't forget Frankie Bones. These were all tricky type of DJs. It's funny a lot of times during the day or on Twitter, I get compliments from people that think I'm such an amazing, technical DJ. I often answer 'I'm alright but thank you for the compliment.' Really, to me--I still want to be like Bad Boy Bill. I feel like I'm the last man standing in the spotlight doing all these DJ tricks. Compared to the old school and the guys I looked up to and still look up to--I feel like I'm still just a guy trying." Always humble, it is no surprise why Laidback Luke's fans have stuck with him through thick and thin.

When recalling some of his favorite moments of his career, Luke had to put his thinking cap on. He said with a big laugh, "It's hard because I do over 150 shows a year and have done so for many years. There are a couple of standout moments though. In 2005, I had my first experience playing Sensation White. Sensation White is a festival in a football stadium. Everyone was dressed in white. I just remember dropping the best track I could play that night. I dropped it and I remember the applause I got. It was the crazy, stadium type of roar. That 'ahhhh!' It really resonated with me. I got goosebumps. I realized how big it really was. Speaking of really big, the same rings true for the opposite reason. Trying to break through internationally. I broke through in the Netherlands. I was on television over there--I had many shows. At a certain point, around 2004, I tried to make it big internationally. Through Roger Sanchez, I got these opportunities to kind of try to play some festivals here and there. I remember the Global Gathering festival in 2004 where I played a tent where potentially 10,000 people could have fit inside of it. But actually I was put on early as a favor. I was warming up the tent even before the winner of the local DJ contest. I remember there were about 3 people in this huge tent and they were really just walking by while I was doing my thing. Two years after I had a slot at that same festival between Pete Tong and Swedish House Mafia. I couldn't help but remember back to 2 years before where nobody gave a shit. That is when I realized I made it. That was another standout moment for me." He had wise words for people who are going through a difficult situation. Luke said, "I can tell you what was going on in my mind when I was done playing the show without any people watching me. You can do one of two things. You can either give up or you can go for it. Happily, I went for it." Luke's passionate decision to continue chasing after his international dream resulted in a dedicated and loyal fanbase.

Laidback Luke made it clear how much he loved his fans. Enthusiastically, he said, "I can honestly tell you I go really deep with my fans. I'm so interactive on Twitter. I've grown many friendships with fans. A lot of them I've known for over five years or more. I've been responsible for a lot of them connecting and having relationships. A couple of my fans got married and even have kids now and still find the time to go to my parties. It's a very personal relationship. It's just me trying to give back. I do realize without them I couldn't be doing what I'm doing now. A lot of times I'm just really thankful for their support." He told me that he only wants his biggest fans to come to his party. He said, "With this event there are no ticket sales. You can only get in with an invitation. I'm only reaching out to the biggest Luke fans and the people that are the closest to me to come out and celebrate."

LAIDBACK LUKE GIVEAWAY INSTRUCTIONS:
1)You MUST press the Facebook 'Like' button on the top right corner of this article.
2) You MUST follow @thekylestevens on Twitter.
3) Tweet to @thekylestevens in 140 characters or less why you are one of Laidback Luke's biggest fans.
4) @thekylestevens will pick 5 winners at random by Thursday. Each winner will receive a spot with a plus one on Luke's guest list for his epic party on Saturday, October 22nd in New York City at Marquee. Good luck everyone!