Sleep like a baby. It's what we all strive for, now that we know how important sleep is. It's that feeling that you have just come out of the deepest, most pleasant, and refreshing moments of your life, and not a sound, a light, or care in the world could have disturbed you. One natural way to get that feeling is through the build-up of sleep pressure, or slow waves (brain rhythms), which involves maximal use of your brain when you are awake. This is something babies "learn" to do over the first year of life. 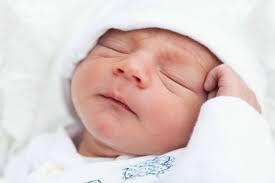 Newborns sleep about 16 hours a day, but as they age they develop a homeostatic mechanism that balances their increasing ability to stay awake and their ongoing need for sleep. The circadian rhythm of sunlight and darkness helps to drive one part of this mechanism. There are specific neurons located in our eyes that uses the presence of blue light to inhibit the production of melatonin, a hormone, which helps to induce sleepiness. This fairly recent discovery, and supporting research, likely motivated Apple to implement the "Night Shift" feature on our devices, which filters blue light after sunset. The developing circadian rhythm is highly influenced by environment, and balanced by an internal system of neuronal activity. This involves a group of brain rhythms known as slow waves, or delta and theta (in infants) frequency waves, which are the other part of the mechanism, and are a measure of sleep pressure.

Slow waves have gained much attention in our understanding of the role of sleep in our everyday lives. They may be a key component to understanding the development of brain-based disorders including schizophrenia, depression, ADHD, autism, and even some chronic pain disorders like fibromyalgia. In 1982, a link between schizophrenia and slow waves during developmental sleep, was made by Irwin Feinberg at UC Davis. This was related to his 1967 report that the magnitude of slow waves measured from the scalp using EEG, increases, peaks, and then decreases across development (an inverted U shape), which he proposed as a measure of synapse pruning in the developing brain. More recently (2003), this suggestion has been advanced into the Synaptic Homeostasis Hypothesis (SHY), by researchers Giulio Tononi and Chiara Cirelli (review article, Scientific American article). 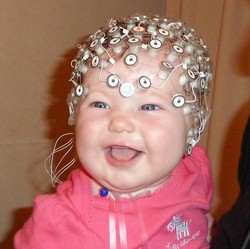 In support of this theory, researchers have been able to demonstrate that slow waves act at a local level in different parts of the brain, by recording them from the scalp using a high resolution technology (dense EEG).

This new sensor technology is actually much easier and more efficient to apply than the standard electrodes. It's a stretchy cap, with wet sponges, that slips onto your head. Thanks to this new technology and clever research study design, there is now evidence in humans that slow waves during sleep occur at different locations in the brain and at different magnitudes, depending on how much you have used that part of the brain while awake prior to the sleep recording. In babies, and children, we can now use this harmless, noninvasive and high-resolution technology to understand how sleep slow waves relate to both brain and skill development, and how it is different in kids who have a brain-based disorder, or who may be at risk for developing such a disorder. For more information on this research, see my current crowdfunding campaign: http://experiment.com/sleep-development. 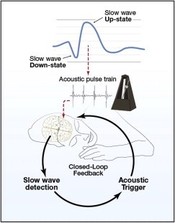 So, how does one enhance these slow waves, in order to increase sleep pressure and "sleep like a baby"? There seem to be several methods out there, some as simple as meditation, exercise, and temperature modulation (i.e. creating a contrast of warm skin and cool sleep environment). There are other slightly more complex noninvasive methods that may soon be available to consumers, which include the use of sounds that are time-locked to the activity of your brain (slow wave) through a closed-loop system. (image credit)

Maybe the easiest way is to use all of your brain with occasional challenging tasks, including your various sensory systems (interactive video, audiobooks, playing music, aromatic cooking), your motor system (exercise, sports), and your cognitive brain (playing chess, studying), so that the active use of your many neurons across your cortical brain leads to a deeper and more efficient sleep.