When we first moved to Latin America, back in 2001, our Spanish language skills were minimal. We had what we call "restaurant and taxi" Spanish, allowing us to get where we were going (usually a restaurant) and order our food once we got there.

But accomplishing our daily tasks was a challenge. Getting something we needed at the hardware store... talking to the teller at the bank... buying appliances at the department store... and forget about having any conversations on the telephone. When our Internet or cable TV went down, we were stuck.

So we knew we had to do something. We had to learn to speak Spanish. It's absolutely imperative if you live in a Spanish-speaking country. We took classes, we tried some computer courses... but it was tough-going. We were making progress, but only slowly. 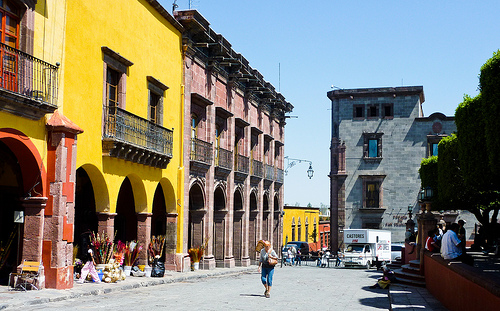 A couple years later when we were living in San Miguel de Allende, Mexico, we decided to get serious. We'd heard good things about the Warren Hardy School there. So we decided to enroll in some classes.

Little did we know that we'd not only walk away with a much better grasp of Spanish, but that we'd also meet two people who would become very good friends of ours. Warren and Tuli Hardy. They'd gone to Mexico on their honeymoon in 1989, fell in love with charming San Miguel, and decided to make it their home.

Right away, Warren saw that a growing number of expats were moving to San Miguel and most were struggling with learning to speak Spanish. He had published his first Spanish textbook in 1972 so he had some experience, and in 1990, he and Tuli opened the Warren Hardy Spanish school.

Warren's teaching method is perfect for adult learners... people with, shall we say, "mature brains," like ours. Suffice to say, after taking classes with Warren, our Spanish skills improved immensely.

So today, we'd like to turn our blog over to Warren. We asked him to write this essay about why learning a new language is so fulfilling, especially if you plan to live or travel in a Spanish-speaking country.

Why Learning the Local Language is Important
By Warren Hardy

This past year, I turned 65. Medicare age. Yikes!

Instead of celebrating--or whining--I spent several days quietly taking
stock, reflecting on where I'm at in my life, how I've changed, what's
important. My key insight: I'm a lot happier now than I've ever been
because I've finally seen through the myth of perfection. Life isn't
perfect. Friends aren't perfect. I'm not perfect. Knowing that, I've
learned to lighten up, go with the flow and cut the world some slack. What
a relief!

I'm sharing this with you because every year, every class session, I face a
room full of anxious students, many of them serial over-achievers their
entire lives, who are grimly challenging themselves to become fluent in
Spanish... or die trying. Worse yet, I often encounter visitors who would
love to retire in Latin America, but who shelve that dream because they fear
they will never be able to "master" the language as an older adult.

What a shame. Because I'm here to tell you, anyone--at age 50, 60, 70 or 80--can
learn to "speak Spanish" in a relatively short period of time, and enjoy the
rich cultural experience of living in another country. Thousands of Warren
Hardy alumni can attest to that fact. And most of them will tell you, the
key is to lower your expectations... and relax!

Of course you need to speak some Spanish if you live in a Spanish-speaking
country. Even if you just stay home, you'll want to talk with your housekeeper,
plumber, fix-it guy or a mechanic. Unless you plan to live in an expat
cocoon, you'll at least want to be friendly and transact your business.

And you can! I've been teaching expats for over 20 years and have designed a course just for us. It's called Power Verbs and it works like this:

Using "I need," "I want," "I am going to," "I can," and "I like to" in combination with the 100 most common verbs and some assorted nouns, you can easily express most all your needs and wants.

This is called functioning and all it requires is a knowledge of basic social protocol --please, thank you, good morning, good evening, pardon me, etc. -- some rudimentary grammar and a modest vocabulary.

Once you can master these basics, you've taken a huge step. You're no longer
an outsider, a stranger. You're no longer anxious or uncomfortable in your
new home. People will respond to you in a positive way. And then, as your confidence increases, unimaginable things can happen in your life.

In my 23 years of teaching expats I've seen it happen over and over again. Our students are expats living in San Miguel full- and part-time, and visitors who come to study Spanish. Most are over 60 years of age and are learning Spanish for the same reasons you are. When we ask them why learning Spanish was important to them, here's what they say.

So here's my message. You don't have to be fluent or know all the tenses. But you do need to know the social graces and how to express your needs. Once you can do this you simply have to open your heart and give it your best shot.

Related articles:
Confessions of a "Taco Bell" Spanish Speaker
"Trying Out My Basic Spanish in Uruguay"
San Miguel de Allende, Mexico: Why Now is the Time to Buy Property There