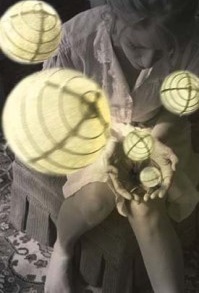 Growing up in a small northern town shaped me in ways untold.

As a little girl my family lived in an apartment above a hardware store on our small town's main street. I still remember that downtown like the back of my hand: It was my playground! While my friends climbed trees and played badminton in their leafy backyards, I roller skated down the steep roads that led to the bay, swam off the dock, and ran my mother's errands at stores up and down the street. On Sunday nights I marched through town behind the Salvation Army Band, singing along to their fervent songs.

I knew all the shopkeepers by name and they knew me. One in particular stands out to this day: Her name was Ming-huá. She was the young Chinese woman who ran the restaurant next to our building downstairs. It was called City Café and was renowned for its great food. It also had the best price on Belvedere cigarettes, my parent's brand in those days, and thus I became well acquainted with the exotic proprietor. How often I sat at the counter watching her and reveling in the constant stir of activity surrounding her.

I remember the wonderfully pungent aroma of the food drifting up on warm days to the second floor, wafting garlic and ginger into our windows, spices we never used. I see the noodles set onto huge metal trays on the roof to dry in the sunshine. But it is Ming-huá I remember most of all.

She had come from mainland China with her two small children. How she made her way there I can only guess; they were probably merchants who had escaped Mao's communist terror. I don't remember a husband. There was an older gentleman. Perhaps her father? He was rather glum, said little, and sat at the end of the lunch counter every day, reading a series of small leather-bound Chinese books. Ming-huá's two children, a boy and a girl, were impeccably mannered but painfully shy. Whenever I spoke to them they would automatically lower their heads and look down. I got in the habit of reaching out and gently lifting their chins up in turn.

I picture Ming-huá at the cash register, her slender frame, her reserved yet warm manner, and her vivid red lipstick. I never saw her without it: bright crimson and perfectly applied. And it never seemed to smudge. I wonder now what her trick was.

Her clothing was always an event. She dressed in a series of colorful silk kimonos even in deep winter and on Chinese holidays and family celebrations would break out more elaborately embellished gowns in saturated jewel tones. Our clothing seemed so utterly uninspired in comparison. I couldn't wait to run downstairs and see what she had chosen to wear that day.

I began helping her in the restaurant after school and on weekends, clearing tables, sweeping, and cleaning the lunch counter. Now and then I occupied her children by teaching them games and reading them stories. In return, Ming-huá paid me in coins, which she placed upright into the round rubber grid that sat beside the cash register. As a wonderful bonus she treated me to ice cream sodas I can taste even now.

When business was slow I helped Ming-huá with her English, and she taught me traditional Chinese. I remember very little of it now, but some.

And one phrase I used more than any other: Qǐng shuō dé màn yīdiǎn . English translation: Please speak more slowly.

I learned how to copy some of the intricate evasive Chinese characters from among the many thousands, writing out my name, Patricia -- tirelessly -- in the quixotic script:

It was painstaking work but to me delicious and I discovered an affinity for the precision it demanded, an exercise that instilled in me a lifelong passion for lettering and penmanship. In fact as a young woman I studied calligraphy and transformed my once awkward left-handed script into a veritable thing of beauty.

Our pronunciation of one another's language often sent us into fits of giggles. We both struggled over certain sounds and neither of us took it too seriously. But Ming-huá was fierce in her determination to learn English; she kept a reference book handy that she referred to regularly when customers spoke to her. I saw how she leaned across the counter to study them. Over time I saw how quickly she was adopting her new tongue and how she delighted in surprising me with English phrases as she mastered them.

"What a lovely day, Patricia," was one carefully articulated greeting she met me with one morning, utterly beaming with pride at her accomplishment. I didn't have the heart to point outside to the snowstorm that was raging. Ming-huá made me appreciate my own language in a way I hadn't, as it pushed me to choose my phrasing and grammar thoughtfully when speaking with her. I felt a distinct responsibility to be the best instructor for her I could be.

We bought a house when I was a teenager, our first since coming to Canada from Scotland, and once we moved from downtown I saw Ming-huá only a few times. When I appeared at the restaurant she would take down a soda glass and begin preparing one of her frothy concoctions for me. I perched on my favorite stool at the counter; it still felt somehow like a second home.

When I returned to that small town years later the downtown had been largely transformed. The hardware store was gone as was the door beside it that once led to our apartment. City Café was no more. A Dollarama stood in its place. I asked some of the shop owners in the vicinity about Ming-huá and her family but none of them had heard of her. Granted, it had been a very long time.

I wonder about Ming-huá's life after I left. Did she move to the city? Find a partner? Master English? Did her children gain the confidence they needed?

If I saw her today, I would tell her that seeing me at such a tender age and taking me seriously were the finest gifts she could have given me. I would thank her for her patience with a skinny, hyper little girl who talked too much and asked too many questions.

I would tell her I remember when she told me proudly that in Chinese her name meant tomorrow's flower.

My thanks to Polly Chandler for the photo.

The Music Of Leaving
by Tricia McCallum

Nothing Gold Can Stay: A Mother and Father Remembered
by Tricia McCallum