A dozen times in the past year I've encountered non-Asian children spouting Mandarin, which they're being taught in school. Apparently, the years my generation spent conjugating French or Spanish verbs has given way, amongst certain precocious tykes, to practicing the complex intonations of spoken Chinese, and as a result they're able to order take-out pang xie and baozi over the phone with total confidence. Impressive? Sure, and the resulting cute factor is right up there with performing Streetcar Named Desire onstage, or whatever's the current grade-school favorite. But even though mastering this challenging language is an impressive accomplishment for anyone, let alone the pre-pubescent set, I keep asking myself: why Chinese? What about the kids who want to order chungdi jhola or shahi paneer next time they get a craving for Indian food? In other words, why not offer them Hindi? 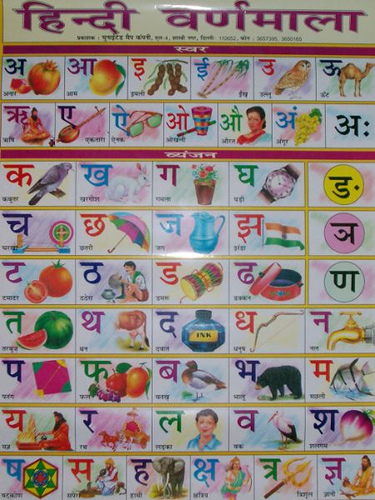 Considering that India is on track to eclipse China's economy in the next few decades and is the second most populated country on our small planet, you'd think a language spoken for centuries by hundreds of millions would get a little more respect! At the current state of globalization, Hindi should be right up there with Spanish as a second language, and we should be taking steps to gently shove Mandarin out of the way. While learning it can't hurt, and might even help on those all-important college resumes, India is a far more welcoming -- and stylish -- country at the moment, not to mention that some of the hottest movie stars working today reside there. Which means any Hindi-speaker has an instant leg up as a fan. So, effective immediately, I'm launching the Learn Hindi Movement. Remember, you heard it here first. 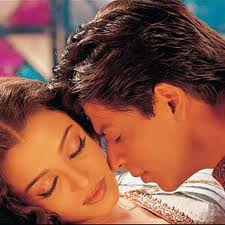 OK, quit the snickering. I'm familiar with this childish response, since I've been torturing my middle-aged brain with Hindi lessons for the past year and the predominent reactions range from laughing in my face to barely-suppressed incredulity. But eventually I'm asked "WHY?" This is annoying. That question would never arise if I were immersed in French or Italian lessons since, somehow, the so-called Romance languages instantly confer a suave veneer on the student, no matter how nit-witted or slovenly they might be. I assume this is because any evocation of France or Italy is inexorably accompanied by schmaltzy mental images of the Eiffel Tower or Coliseum along with scenes from Midnight in Paris or Roman Holiday. Éclairs, pasta, fabulous handbags ...the list of cultural references is infinite, sophisticated, and desirable.

But Hindi? Few non-Indians have any reference for what is the official language of a vast and ancient country. Sure, they can muster the Taj Mahal, maybe Slumdog Millionaire and a sari, but beyond that? Bupkis. Forget any continental aura, or even the egg-headed super-achiever status conferred on students of Chinese. Instead, the pursuit of Hindi by a blond, white, Jewish girl like me only bestows a generous dollop of eccentricity, like admitting to being a graduate of the Klingon Language Institute.

This is absolutely not fair. After all, Hindi has been a potent if stealthy presence in Western writing and conversation for hundreds of years, leaving its sub-continental footprints all over the place. For instance, imagine you were to call the police to declare "A thug stole bangle bracelets from my bungalow, and he's on the verandah trying to escape by dinghy! But my pet cheetah just attacked him! Oy veh, I need a hot toddy!" You've deployed at least six Hindi-derived words right there. Try mixing Mandarin into a sentence and see how far you get. 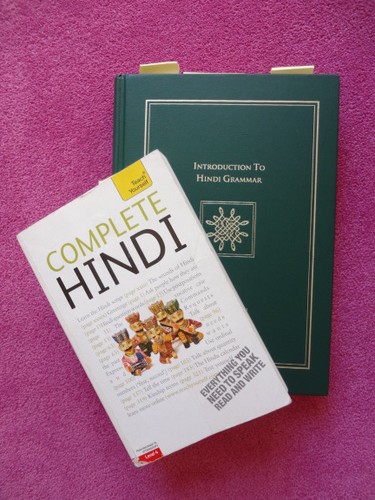 Learning either language is no cake-walk (even if droves of fluent Chinese-spewing second graders indicate otherwise) and the private Hindi lessons I take have convinced my suffering tutor that I'm a complete moron. Luckily, not everyone is as dense as me, and will no doubt progress much further in half the time. If learning a new language stimulates mental agility in the aging brain, then mine seems to be moving at the speed of an Ativan-addled three-toed sloth: each weekly session feels as though I'm pushing play-doh through a tea-strainer in my head, and if any new neural pathways open up (I imagine this as a soda straw shoved into Mount Rushmore) they cannot possibly offset the millions that have collapsed and died with the exhausted strain of trying so hard. Personally, I'm staving off time's progress with as much vigor as a soggy piece of naan. 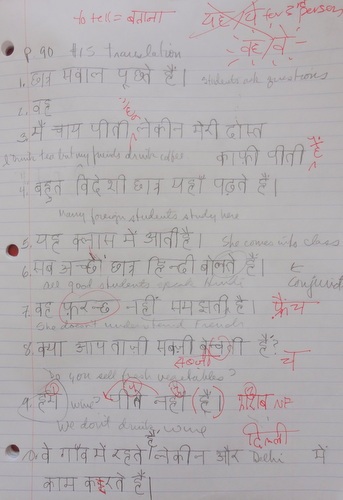 But I will keep at it. For one thing, the Hindi Devanagari alphabet is graphically-gorgeous, its curlicued letters dangling from an elegant line in the seeming reverse of our Western writing, with words stolidly squatting on the ground. Plus, Hindi lacks any reference to alphabets familiar to me -- it might as well be Klingon -- which means that cracking this mysterious code of dots and flourishes is all the more rewarding. Those snooty Romance languages are just Western letters, re-arranged. Big whoop.

But secondly, I take on this weekly wallow of humiliation as part of an Indian obsession that's gripped me for nearly three decades. Come January, I'll put myself to the ultimate test, like Eliza Doolittle at the Embassy Ball, when I'll spend several months on the sub-continent. Unlike Eliza, I won't be fooling anyone with my smooth-talkin' ways, since it's doubtful I'll be able to converse with anyone above the age of 3. Still, I'm practicing my most fluent sentences, like "here is one banana" and "that's a very big chair."

But in another year, my Learn Hindi Movement will have surely gained real traction and millions of members, just you wait and see. Those Chinese-speaking whippersnappers will have some competition, amidst rallying cries of "Hindi Rules, Mandarin Drools!" And my legacy will be assured.