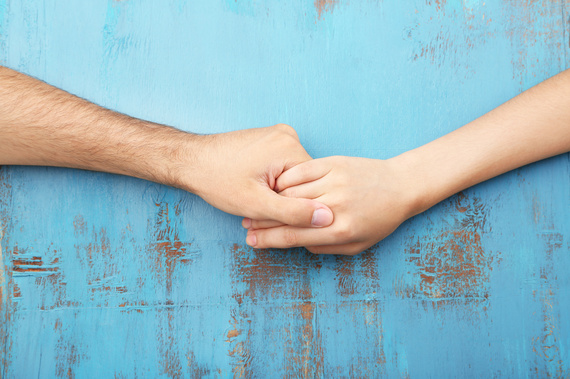 It was such a simple act, but it rocked me to the core. So much so that it completely overwhelmed me on the drive home this morning, and I couldn't hold back the tears. I didn't care that people pulling alongside me could see me swiping them off my cheeks with such vigor that they hit the inside of my car window. I was unconcerned about how my running nose and my trembling lips might look to fellow drivers. Finally, 20 minutes later, after arriving safely back at the house, I was able to compose myself and begin to think about what it all meant.

Fairly safe to say I have not been involved in anything even remotely resembling a church service since the late 90s, I can't even remember the exact year. It's been a long time though, and for good reason. I had decided to leave my 20-year marriage amid some of the worst decision making of my life. None of which set very well with my current congregation and it was clear I would have to leave the organization if I was going to follow through on my intent. So I did.

To say I went off the deep end after my divorce would be putting it lightly. I went as far, and as fast, away from religion as I could go. I steeped my body in self-destruction, the kind you are lucky to survive. All sense of who I was, who I thought I was, what I tried to be, was gone. Wiped away like dust on an old mirror and I know longer recognized the face I saw looking back. For many years I wandered in the wilderness, almost as if I "needed" to. Denial is a strong thing and more likely, I "wanted" to. The illusory sense of freedom from responsibility would be played out for several years before I realized that my path was only making me more miserable. It was causing more problems. It just wasn't working. During that time, much damage was done in the name of "I've got to be me." That was just a lie. I didn't know who "me" was, so I tried on a few different types of "me" with equally dismal results. But through it all, I kept in contact with God. I asked that he not give up on me and that I would be back, His prodigal daughter.

Fifteen years later, standing at the end of my second marriage, my heart and soul could no longer play the part I had chosen for them. They demanded to be heard, to be acknowledged, nurtured and released from being held captive all this time. With gentle assurance that they could lead me back to the life I was meant to have, I decided to embark on the path of self-discovery. Little did I know the parallel path of self-destruction would be ever present and I would be walking in two worlds without even realizing? Coming to know one's true self is not just about finding the light, but seeing the dark for what it is. How easily we can convince ourselves, "Oh I can eat too much because I am a spiritual person." Or, "It doesn't matter if I drink too much, because I know my heart is good." When I put it in writing, it makes me laugh. Don't fool yourself, Becky, you can't do this alone.

The call to community has been a steady one, since I've continued to pull my gifts, my thoughts, feelings, and my true nature out of the cobwebs and into the day. A "desire to belong" that we all have (and I swore I didn't) shows up in other areas of my life. I try to fill it elsewhere, but it's not found on a plate or in the bottom of an empty beer mug. I know, for me to continue to grow into my true self, I need to answer that call and it's terrifying. It's filled with time and commitment, compromise, tolerance, patience and other things I need to learn. But it also houses all the good stuff, support, companionship, comradery, fun, and joy, purpose, giving, receiving and first and foremost ... LOVE. The same love that we're all made from, and is an immovable part of us.

I've recently been asking the universe a lot about love. What does love really look like? How can I know it more fully? What would I want out of a truly loving, romantic relationship? Hours upon hours, I scour articles and books, looking for help in better understanding human nature. Reading about how I can improve my interactions with all people, how I can make a difference in community and also be a better person. In so doing, I tell myself, "Maybe I can attract a better mate, one who is more in tune with themselves?"

Today, I decided to take another step in the right direction, and go to a church I've heard about from several of my new friends. In fact, I've been there for Full Moon ceremonies and Tarot classes but never for a service. I've always felt a lot of goodness there, though, so for some time I've been contemplating seeing what the congregation is like. I imagined them a diverse crowd since all religions are welcome and their members practice meditation, energy healing etc. It's definitely not your typical non-denominational church. After describing it to my daughter, she referred to it as a Hippie church, to which I couldn't (as I chuckled to myself) disagree. It seemed the most likely fit for who I am now.

Happiness, I felt happiness. I felt happy to be there. The content of the talk was interesting and uplifting. Next there was a group meditation, which was so nice. All these people sitting together in silence with the same intent, really lovely. Lastly, they all stood up and formed a circle around the outer perimeter of the room, joining hands as they did to sing "Let There be Peace on Earth" together. A nice man asked me to come out of my seat, knowing it was my first time there, so I followed him to an open spot in the chain that was forming and took his hand in my right. To my left was an older woman. With her (and immediately next to me) was a small, middle-aged man with Down syndrome. I took him to be her son, but he may have been a brother. He smiled broadly at me as I looked down and took his hand in mine. And then, like a true gentleman, he kissed it. That moment will stay with me forever because the universe answered, "That simple act, dear Becky, is love."