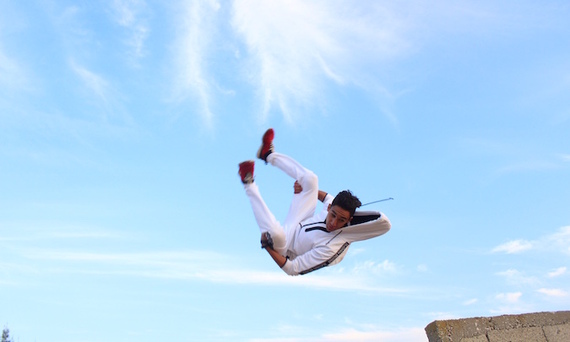 Ahmad Matar has been doing parkour in the Gaza Strip since he was 10 years old. Now 20, he was inspired to try the extreme sport - which sees participants acrobatically traverse physical obstacles using no additional aids or equipment - by his friends Abdullah Anshasi and Muhammed Aljkhbeir, who introduced parkour to the Palestinian territory after watching the documentary Jump London online. Enamoured by their early attempts and videos, Ahmad joined them as one of 12 founding members of Gaza Parkour in 2005. Despite the difficulties presented by living in a place* other people's conflicts have reduced largely to rubble, the collective hold tight to their dream of bringing hope to Gaza through a sport that, as Ahmad explained to me for Impolitikal, makes them feel truly free.

*Ahmad secured an athlete visa after three years of trying, and currently has residency in Sweden.

Why did you start doing parkour? How did you find out about it?
I was inspired by my friends, who started parkour in Gaza. They were practicing in the street. I liked the idea, because I saw that they are jumping, they are flying. For me it was incredible how they can jump, and how they can flip in the air. I joined with them, and we started to learn parkour by internet, and to see how the people out of Gaza do parkour, and to learn from them. In Europe they can learn with the equipment. It's safe for them, and it's not difficult for them to learn any new skills, but for us the only thing that we can look at is the internet, to see step-by-step how they do it. Then we can be better by better, in the level. In this moment, there are people that say that we are from the best teams in the Arab world, and there are people who say we are from the top best teams in the world. There are professional teams in the world, and we are one of them. That makes us happy, and makes us complete.

Have you been able to travel out of Gaza, other than to Sweden, to do parkour?
If anyone wants to get out of Gaza it's so, so difficult. For example, I've been trying to travel for three years. I've been invited for many events. For three years I've been trying, and in the end I got help from my friends here in Sweden. It was a long time to do all the documents, because it's difficult for someone from Gaza to travel to Europe. Sometimes you get refused, sometimes you get accepted. Even if you get a visa it is still difficult to leave because the borders are closed all the time. When the border between us and Egypt is closed we can't travel, because there is no airport in Gaza. The only way we have to go is from Egypt airport, or boat. 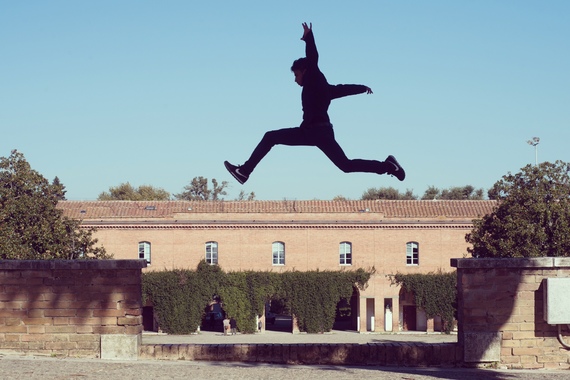 You'd never left before?
I didn't travel before. It was the first time for me. To be in Sweden, and to travel. Really, the freedom is so beautiful. It's different between Sweden and Gaza. The life that people have. I can see that they're always happy and they all can do what they want. But in Gaza I couldn't do anything I wanted. I was just doing parkour all the time, after parkour to go home and sit with my family and sleep, and the next day is the same. Because there's no work and nothing to do, and parkour was the only thing to show our feelings.

Does doing parkour give you a sense of freedom?
When I do parkour I can forget that situation, when I was in Gaza. It's the only thing that I could do, and the only thing that helped me to keep hope that the future is coming, and that something will happen for me. I was always doing parkour. It's my life, it's in my blood, I can't not do it. For us in Gaza, we practiced parkour to feel our freedom. Because it's the sport that we can fly, we can jump over the obstacles, there is nothing that can stop us. That's the idea that we can find our future, and our freedom in parkour.

In Western media, most of what I see of Gaza is photos of bombed-out buildings, and rubble. But are there areas where it still looks nice?
Some places are bombed from the Israelis, it's not all the places. There is also another side in Gaza that shows that Gaza is beautiful, but at the same time there is another side that you can see the rubble and you can see the bad situation inside the people. There are people that live their life with happiness, and there are people that have a sad life and bad life. It's 80% of the people who have the bad situation in Gaza. We were showing the videos, of us doing parkour on the rubble, just to show that we have dreams and we continue even despite all this rubble, and nothing can stop us. Also, it was the idea to show how much is difficult in Gaza. We practice sport in this situation. We don't have the place, and the rubble is our place.

Do you feel a strong sense of connection to the rest of Palestine?
For sure, we are friendly with other people who live in Palestine. And I wish someday that Palestine gets freedom, so everyone can go where they want, and live where they want. For sure, when I talk with someone from Palestine I feel happiness. Because I want to feel their situation at the same time. All the time I'm talking with my family, because I want to see their situation, I want to make them feel better. Because I know the situation there, and I know how difficult it is. And I hope some day that it gets better and better.

Read in full at Impolitikal.com.