I probably post more selfies to social-media accounts than the average male. According to a recent study this would indicate that I may be more inclined toward psychopathic and narcissistic tendencies with a dash of self-objectification thrown in for good measure. I suppose that's fine by me, considering that, not so long ago, I despised the face staring back in the mirror.

When I created my online dating profile seven years ago, I posted one picture. It was the only one that I liked. The angle covered up a bad haircut, and the close-lipped smile hid my crooked teeth. I had just come out as gay, so I didn't have many photos for which I had spent any time choosing body-conscious clothing, standing in the best light or angling my face so that my jaw line appeared stronger. For most of my life, I had been too frightened that doing any those things would reveal my secret.

Years of living in the closet can destroy any sense of self-confidence. When I looked at my face, all that I could see were the flaws. The eyes were like slivers, the chin was too weak, and the furrows that lined my forehead were like the deepened ruts of a muddy country road. The landscape of my face was as unappealing to me as the workings of my heart. When you're convinced that what you're feeling on the inside is ugly, it has a way of bubbling up.

But then I met a man who liked the shape of my face. He had the type of rugged good looks that are appealing in any light, which was both a blessing and a curse. It can be confusing to love someone's handsome face and feel envious of it and insecure about it at the same time.

I thought he was either foolish or blind when he first told me I'm good-looking. But, day after day, he continued to repeat it until, eventually, it became a routine.

"What's your job?" he would ask whenever I offered up some piece of dubious advice.

"To sit here and look pretty," I'd reply.

"And what a good job you're doing," he'd smile.

Amusing as it was, it worked. His daily affirmations allowed me to see something I had never seen before. After 40-odd years, I finally became comfortable with and -- I'll admit it -- appreciative of the way I look. When this handsome man made a promise that my face would be the first one he would wake up to every morning and the last one he would kiss every night, something amazing happened. My reflection in the mirror, or my image as seen through the front-facing lens of a smartphone, became more of what he saw and less of what I hated.

So I take more selfies than most men, and that's a big deal, but not because I value my looks more than I value my soul. It's quite the opposite. The happiness I have finally achieved on the inside has bubbled up to the surface. You can call me psychopathic and narcissistic if you want, because labels don't define me anymore. After so many years of unhappy pictures taken by others, I'll make a record of my own face, because the beauty I see on the outside has finally replaced the ugliness that was inside. 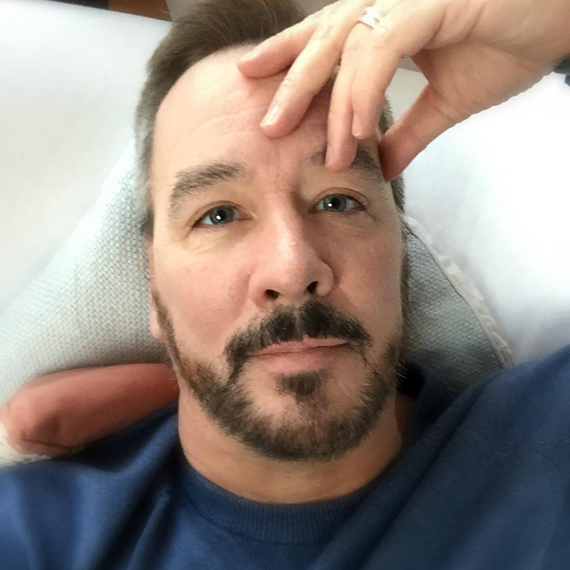 Queer Voices Coming Out Self Esteem Selfies Love and Relationships