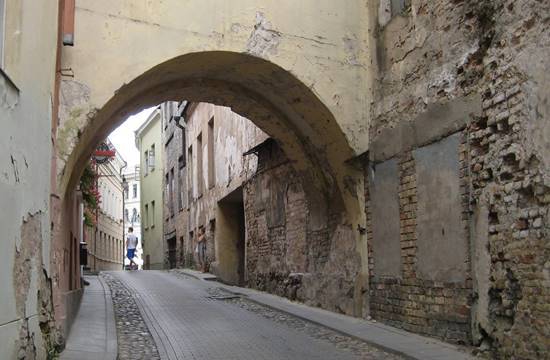 The sky above was a brilliant blue, with puffy clouds, as I crossed the courtyard of Vilnius University on my way to Yiddish class. I had come to the capital of Lithuania to learn the language once spoken by Eastern European Jews on both sides of the Atlantic, among them my grandfather and many other family members. I'd come to walk the streets my ancestors had walked. And I'd come to see how Lithuanians were engaging with the Jewish past.

"Dear students," our teacher said, "you must study Yiddish not only with your eyes but also with your nose." Acquiring this beloved language, he meant, was not just a skill but an art, requiring not only our heads but our hearts.

We began at the beginning, with the alphabet, just like in the old days, when little Jewish boys used to start their lessons at the age of three. On their first day, the letters in their primers would be sprinkled with sugar, to show that learning was sweet.

And indeed, for me, the learning was sweet.

Even more than I'd hoped, learning Yiddish brought the past to life. The literary texts we read were studded with the very places we passed on our way to class.

In the afternoons, the city's last Yiddish speakers walked us through the streets. Traces of the old Jewish world were everywhere if you knew where to look. We saw the spot where the Great Synagogue once stood, and the sites of libraries, schools, theaters, and markets. Once, the city was known as "yerushalayim de lite," the Jerusalem of the North. Jewish Vilna (as the Jews called it) flowered until World War II. Then came Soviet tanks, followed by the Nazi years, when tens of thousands of Jews were crammed into the Vilna ghetto.

Throughout Lithuania, more than 90 percent of the country's 240,000 Jews died during World War II. After the war, the Soviet regime further erased Lithuania's rich Jewish heritage. Today the city is home to only a remnant Jewish community, numbering a few thousand.

My first visit to this place of splendor and tragedy took place more than a decade ago. Since then, I've been back to study Yiddish several times. This summer I'll return again.

Part of what draws me is the opportunity to see how the people of this country - Jews and non-Jews alike - are engaging with the Jewish past. Bit by bit, they're finding ways to weave the Jewish story into their national narrative. They're using an encounter with the past - its glories and its horrors - as a means to a more tolerant future.

Once again this summer I'll visit the Tolerance Center, part of the Jewish museum, which celebrates Jewish heritage and sensitively explores the dark days of the Holocaust.

I'll get together with historians, writers, and educators who are posing tough moral questions to Lithuanians young and old.

I'll meet with activists who honor the Jewish past with commemorative ceremonies and tolerance awards.