There are plenty of companies out there that claim to be the Google for this or the Netflix of that. But this "Pinterest for learning" may be on to something.

Launched two years ago, Learnist has earned a small but steady audience -- 3.5 million to 4 million people log on every month -- for its slideshow-like "boards" meant to educate readers on everything from "The Ukrainian Crisis" to "5 Mind-Blowing Theories about Your Favorite Disney Films."

Learnist already has versions for iPhone, Android and the web, and it's launching a new iPad app on Thursday. 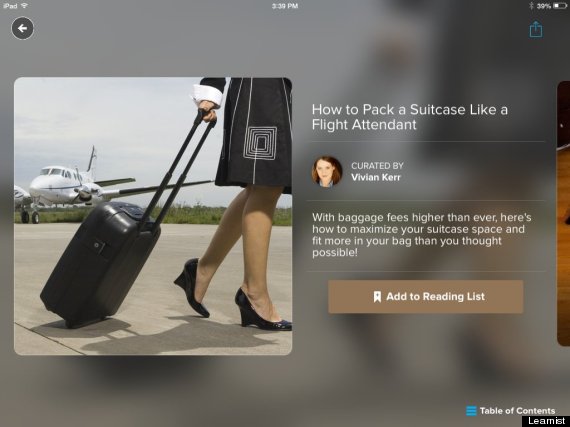 One of Learnist's biggest hits: "How to Pack a Suitcase like a Flight Attendant"

Learnist's boards might remind you of Vox.com's "card stacks," which also offer bite-sized facts in a slideshow format.

Like Twitter, which got an early boost from celebrity accounts, Learnist is courting notable contributors like Washington think tanks, a co-host of the TV show "MythBusters" and HuffPost Editor-in-Chief Arianna Huffington. These authors can sell "premium" original content for 99 cents through the site.

Despite the comparisons to Pinterest, Learnist Vice President of Product and Customer Development Steve Rodriguez said he thinks the company has a niche with its experts. While Pinterest is used to bookmark things you like or show off things you're interested in, Rodriguez said Learnist is about more.

"We had some early comparisons because we have boards and they have boards," Rodriguez said. "Curation is effectively pinning things to a board. But in Learnist, you’re pinning -- if I can use that word -- knowledge."