If the world seems a more violent place to you than it was five years ago, you may be right. In a new report, the Institute for Economics and Peace (IEP) writes that global peace has declined 5 percent since 2008, mostly because of the growing number and intensity of internal conflicts around the world.

According to the institute's Global Peace Index 2013, the least peaceful country in the world last year was Afghanistan. Though the drawdown of NATO forces continues and civilian casualties have fallen compared to 2011, the country's peacefulness score fell to its lowest level ever.

The GPI tracks the prevalence of peace in 162 countries through 22 different qualitative and quantitative factors. In general, a country's peacefulness rating is based on the degree of militarization, the presence of domestic and international conflict, and the safety and security of its civil society.

According to the report, Afghanistan's declining ranking was driven by rising levels of political instability, terrorist activity, and expenditures on Afghanistan's national army, which has ballooned to almost 200,000 strong. Michelle Breslauer, the U.S. Program Manager for IEP, told The Huffington Post that it was "not surprising" to see military expenditures rise in Afghanistan given the persistent threat of violence in the country during recent years.

Syria saw the largest annual decrease in peacefulness in the seven-year history of the GPI. Over the past five years, the war-torn country's GPI score has fallen an unprecedented 70 percent. Just two years ago, Syria was ranked 108th out of 153 countries, more peaceful than all of its neighbors except Jordan.

Somalia fell from the least peaceful country in 2012's index to the second least peaceful this year. Though the country's coastline has seen a precipitous drop in pirate attacks, the conflict between the Transitional Federal Government and terrorist group al-Shabaab remains a serious threat to social and political stability in the horn of Africa.

Perhaps most strikingly, the Global Peace Index 2013 found that $9.46 trillion was spent last year containing violence worldwide, equal to 11% of the gross world product. If only half of that amount could be saved, the study found, that would suffice to repay the entire debt of the developing world.

The report admits that "it is a utopian vision to expect a world free of violence," and major components of the cost of violence like military and police expenditures cannot be eliminated completely. However, IEP calculates that a mere 1 percent reduction in the cost of violence would free up enough money to provide full funding for the UN's anti-poverty Millennium Development Goals.

The GPI report identifies eight conditions that are conducive to peaceful societies, including equitable distribution of resources, stable government, and low levels of corruption. According to Breslauer, making peace a priority requires taking a holistic approach that considers all of these factors at once. While she admits that the Global Peace Index has not been around long enough to identify specific policy solutions, Breslauer says it is helpful to see peace as the product of institutions and structures, not merely as the absence of violence.

Below is a map showing the 2013 Global Peace Index, of which an incredible interactive version can be found here. 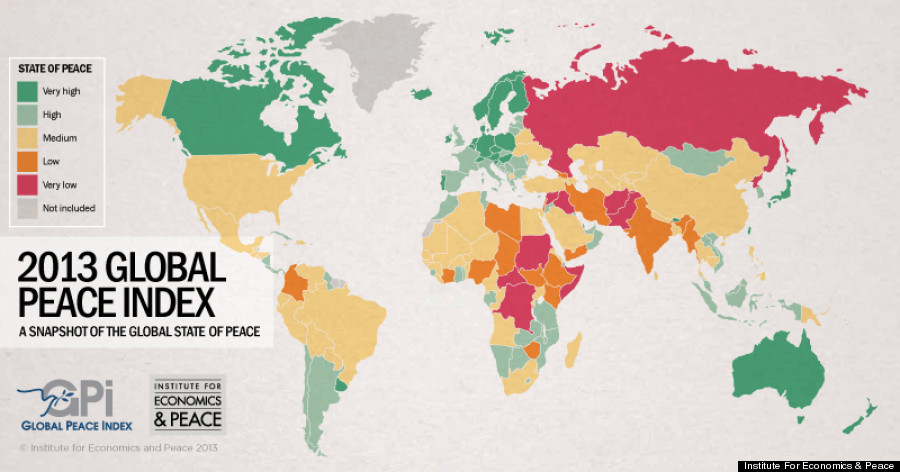 Check out the ten least peaceful countries in the world in 2012 below: