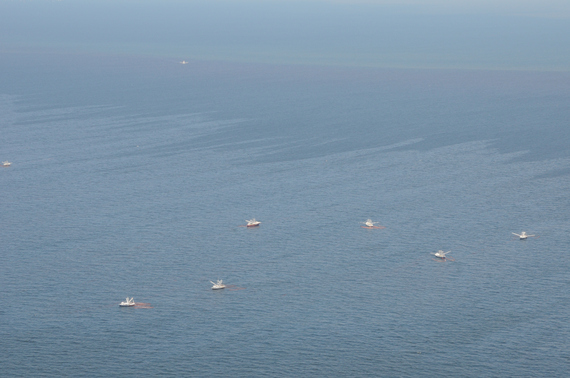 A portion of the BP Deepwater Horizon Gulf of Mexico blowout in May 2010.
Photo: Carl Safina

But memories are short, so we're drilling for more in harder, riskier places. Last month, the Obama administration made the decision to lease parts of the Arctic for potential offshore drilling. We are gratified that the Administration has taken Atlantic Seaboard leases off the table; we wish they'd nixed arctic drilling too.

The Gulf and the Arctic Ocean have similarities: people depend on these places for their livelihoods, unique and iconic wildlife make these places their homes, and oil companies lobby for the right to own these places and people.

Yet here's where they are different: the Arctic Ocean environment is harsh and unforgiving - it is cold, dark and icy for most of the year. Unlike the Gulf, there is little infrastructure in place to help if there was a spill -- the nearest Coast Guard station is 1,000 miles away. Despite having an astonishing array of nearby infrastructure in the Gulf, we watched BP oil gush for months while they bumbled helplessly with ineffective ad-hoc efforts at plugging the hole.

Accidents happen. The risks in the Arctic are huge if drilling happens in the Chukchi Sea. Cleaning up a blowout or major spill in the Arctic's icy environment is impossible. 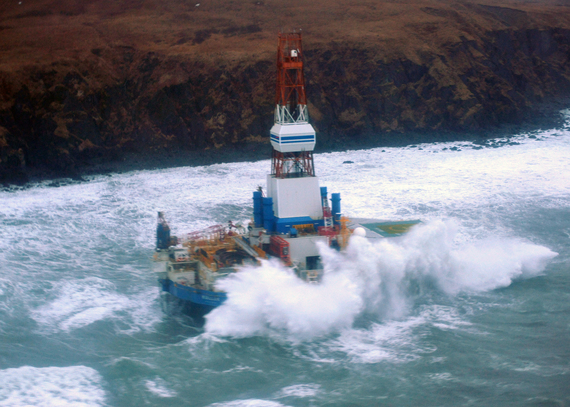 We know the Arctic is a unique place of critical importance to many - including Alaska Natives who rely on the ocean for subsistence... we want to hear from the public to help determine whether these areas are appropriate for future leasing and how we can protect environmental, cultural and subsistence resources.

They are not appropriate. The risks of Arctic drilling are far too great -- to the people, to the wildlife and to the future of our country.

Alaska is feeling the impacts of climate change more than any other area of our country. Permafrost is melting, sea levels are rising and communities are washing into the sea. Since 2009, walrus unable to find ice have been increasingly hauling out on land, to the detriment of their young. Haul-outs of 20,000-40,000 animals have occurred because there was no ice in the Chukchi Sea. Easily frightened on land, walrus and their babies can get caught in sheer panic during a stampede, all because our climate change caused by burning oil and coal has destroyed their home. Now is not the time to add the possibility of a major spill. That time has passed.

We shouldn't have to worry about arctic animals. We're already tired of seeing televised images of oil-coated birds and otters. We're tired of safety equipment that fails. We're tired of seeing the pain from people that have lost the opportunity to make a living at what they love. We need to make the transition to a clean energy economy and we must do it now by taking special places off the table and protecting them from risky and dangerous drilling.

We cannot justify opening the Arctic to drilling when the Arctic is a poster child for climate change. President Obama has made a commitment to mitigate climate change and has announced a U.S.-Canadian agreement to working together to protect the Arctic. It's a no-brainer to avoid any new Arctic leases. Protecting our climate and protecting the Arctic are intrinsically linked. Leave the oil where it is and let's do more for clean energy.

Carl Safina is an endowed professor of marine sciences at Stony Brook University and author of 'A Sea In Flames'. Sylvia Earle is an ocean explorer and formerly Chief Scientist at NOAA.