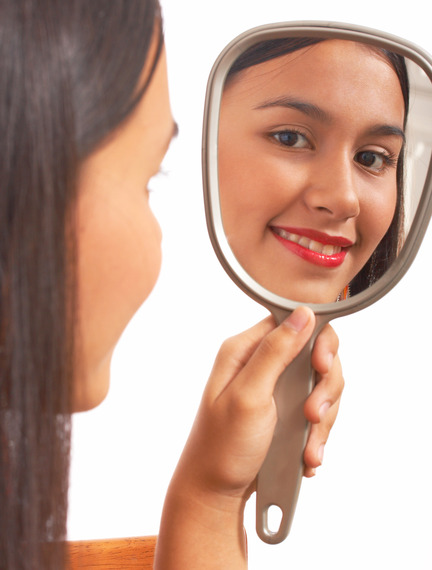 I thought I knew what was in store when my friends and I entered the funhouse at the Ohio State Fair: a collection of twisted mirrors and a chance to strike silly poses and laugh at our warped reflections.

The five of us were in high school at the time, and I was quite skinny -- just beginning to grow out of a phase in which classmates had called me "bird legs" and other unflattering names that lingered in my thinking.

Looking in those mirrors, I got to see a larger, curvier reflection than I was used to. The image made me pause. I liked it.

My friends had filled out more than I had, but most were uncomfortable with their real-life shapes, as well. One thought she was too short. Another thought she was too tall. And two thought they were too heavy. So for them, the fun in the funhouse lay in reflections that made them appear taller, or shorter, or as thin as paper.

We stayed only 10 or 15 minutes among the mirrors before moving on to other attractions. But something from those moments stayed with me.

Roughly 12 years later, I was looking through old family pictures with my sister-in-law, and we came across a snapshot of me at roughly the same age that I was that day at the fair.

"Please don't look at that," I told her, but my sister-in-law wouldn't be hurried. She made a big fuss about how cute I was in the picture.

Her insistence got me thinking: Was my perception -- even through adult eyes -- as distorted as the reflections in the funhouse?

But I'm still human, and for us humans it can be difficult to recognize when beliefs about how we're perceived don't match reality.

Yes, the teen-aged me was thinner than she wanted to be. But whereas I once continued to think of her as unattractive because of her size, my sister-in-law saw a girl who looked fit and lively - even pretty. I think it was that day that I started to see her as pretty, too.

When I married at age 21, I stood 5 feet 8 inches tall and weighed 102 pounds. Fast-forward to now, and I'm a little heavier -- 130 pounds. Still, I think it's fair to say that in adulthood as in childhood, I have stayed on the skinny side.

What has changed more than my weight is how I think about my figure. Year by year, I have grown more comfortable and confident in how I look.

Sure, I notice loose skin and wrinkles as they arrive, and I've never been described as voluptuous. But I'm proud of my body and all that it has accomplished. I'm a three-time mom. A marathon runner. An author.

Everything in my reflection is part of what makes me beautifully myself.

I challenge you today to think about elements of your self-image that may be distorted by old insecurities or new discomfort with changes in your appearance. Take a good, long gander with kind, realistic, appreciative eyes -- and a spirit that knows better than to see through a twisted mirror.

Women Self Esteem Self Awareness Beautiful