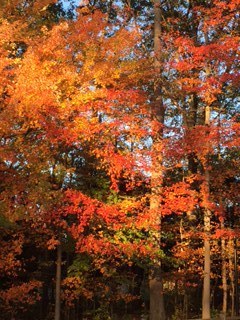 I am attending a workshop in Norwich, Connecticut these last two weeks of October. Here at the Norwich Spa and Inn, walking past historic red brick buildings and a bee aviary along stone pathways, I have had the privilege of seeing the fall leaves at their true peak, literally exploding. The beauty of the red, green, and yellow leaves is so great that just stepping outside causes me to involuntarily catch my breath. I am compelled to walk nearer to them and gather a few acorns for my pocket before I enter the course room.

The color of these leaves also means that it is, finally, time to vote.

For me, the last sixteen months of the election have been the antithesis of the beauty of these leaves. The competing challenges ring out daily about "crooked Hilary" and "racist, misogynist Trump." People are choosing sides, building personal walls against opposing views, defriending people on Facebook, and worrying. Anxiety and mistrust is up nationwide about the future and safety of our country. I can feel it, too.

Here at this conference, I had an opportunity that I wouldn't have had, if I was still at my home in California. I watched the third Presidential debate on television with Mike, a Chicagoan and Trump supporter. Normally, I wouldn't have done that, the true blue Democratic voter that I am. Watching the Democratic National Convention, I was moved by many the speakers on the convention stage honoring the diversity of who we all are and the hope for our future. I was proud of the young women leaders I saw speaking so confidently, moved by the humanity of the Khan family, and clear that the voices and stories of the LGBTQ community, the handicapped, and of all race/ethnicities should be represented in both words and sign language.

Working in the field of kidney donation at UCLA School of Medicine, I have learned at the most biological level that there is no option to build a wall against each other. I watch the kidneys of White donors be transplanted into Black and Hispanic kidney patients. And vice-versa. It takes community and generosity of people who donate kidneys upon death or while they are alive as living donors to help the 100,000 people awaiting kidney transplants of every race and ethnicity have a chance for a longer life. In my field, we are truly "Stronger Together."

The night of the debate, Mike gathered dead leaves and twigs from outside and lit a fire in the fireplace. He brought a carefully constructed plate of crackers, and a variety of cheeses and dried meats. I was impressed as I donated my meager contribution, a bag of dried apricots, that I had brought with me on the plane. As each candidate began to answer questions, he opened a bottle of wine and poured two glasses for each of us, a true gentleman.

As each candidate began to challenge the other person's competency and policies on the television, I asked Mike to explain to me why he has decided to vote for Trump. We both stopped listening to the vitriol and challenges on the split-screen television. I listened as he explained his concerns about big government and whether the Democratic party could have the ability to pay for what needed to be done. He expressed his concern about where the world and the country was headed, how fast it is all moving now and the need to shake things up to survive and stay competitive. If he had posted something about Trump on Facebook, I would have immediately scrolled past it, but, here in the firelight, I saw his worry for our country, which I also shared, and heard his interpretation about what he thought a possible solution could be.

In spite of the television debate and our own defenses of our preferred candidates, we left the debate both unchanged in our voting plans on. Today, I will complete my California mail-in ballot from Connecticut to vote for the first female President of the United States, Hillary Clinton. As a woman, this is a quiet moment of joy and victory for me and other women leaders that have come before and afterwards. And, Mike will vote for Donald Trump for President of the United States.

Here is something else I know, working in the field of kidney donation. Inside of each of us, our kidneys are the same color. Whether you are White, Black, Hispanic, Democrat, Republican, or Independent, our kidneys are all pink. Mike and I are the same. And the answer of the Presidential Election is not one answer, or even two answers, this is a collective answer, as a country of millions of voters. I hope to be relieved on November 9th. So does Mike.

Yesterday, as Mike and I left our course, I pointed upward at the black silhouette of a bird, the tips of its wings edged red as if on fire. As the bird flew past the trees and out of sight, Mike and I smiled, grateful for the chance to be here together in this moment.