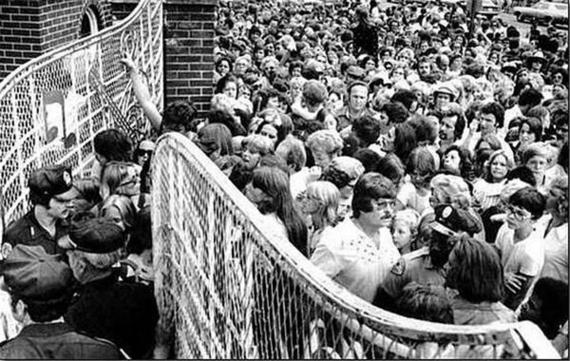 Life in the Boomer Lane has just returned from Hawaii, where she had the rewarding experience of spending many hours in airports and on planes, contemplating the human race. At the Kona Airport, which is designed to look like a Hawaiian Village, rather than anything affording transportation, the gates were mere suggestions. LBL's boarding pass said "Gate 2." The closest gate she could find to that was Gate 3, which, luckily, turned out to be an excellent choice.

She noted the following:

Carry on bags are now approximately the same size as the bags people used to check in. They are accompanied by "personal" bags the size of the average carry on. The result is that people are getting onto planes, carrying about 100 lbs of clothing, etc. LBL is a permanent member of the Boarding Group 5 Platinum Key Club, and was only able to score overhead bin space only because the plane wasn't full.

As soon as travellers detect an actual human airline employee anywhere near their gate, they start to swarm toward said gate. They do so in spite of said human making frequent announcements like:

"We are in the process of cleaning the plane and attempting to get rid of both a noxious odor and a traveller who has locked himself in the bathroom. We will not be ready to board for at least 20 minutes. Please stay seated." No one sits down. The crowd surges forward.

"At this time, we will board only those people with small children, people who are completely incapacitated, and those who are veterans of at least two world wars." The crowd surges forward.

"We are boarding Group 1 only. If you are in any other group, please be seated, or you will be arrested and your souvenirs will be confiscated." The crowd surges forward.

"We will repeat that if one more person tries to get onto the plane who isn't in the group that has been called, Hawaiian sumo wrestlers will be called in to deal with you." The crowd surges forward.

After repeated announcements and watching people being denied access to the outside where the plane is (no jetways, here, folks), some people grudgingly step back a few steps, but make sure they are still planted firmly in the path of anyone attempting to board. They wait a second, then start to creep forward again, until they end up once again in the mass of humanity that continues to surge forward, mostly balancing on feet encased in large, chunky, multi-colored Dayglo sneakers. The scene looks like a fire drill at a clown convention.

In this particular group of surging humanity was a woman with a small, white doggie. The doggie was wearing a little white jacket. LBL learned that the little doggie in the little doggie jacket was a service dog, trained to give its owner "emotional comfort." LBL would have derived emotional comfort if she had a Doberman or a pit bull at her side.

What seemed like hours later, the bedraggled members of Boarding Group 5 were finally allowed to board. LBL had, by then, consumed all of the snacks she had brought for the flight. She turned her Kindle on, which asked her for the first time ever to enter a password before being able to access her book. It goes without saying that the Kindle refused to accept any password that LBL entered. After several attempts, she was locked out of her Kindle account, her VISA and back accounts, and the key to her front door was confiscated.

LBL was thrilled to arrive at LAX, where she saw no chunky Dayglo sneakers. She did see fabulously creative hair and clothing styles, facial piercings, women in stiletto heels, and a young woman with a tattoo of a spectacular portrait, covering her entire forearm.

No matter how creative/quirky/fabulous/downright weird these people were, and no matter that they had better taste in shoes, they, like the tourists in Kona, had perfected the art of the crowd surge. And, because large pieces of luggage were being dragged onto the plane and the plane was full, everyone in Boarding Group 5 had to check their bags. Last LBL saw, the bags were all tied to the tail of the plane, as it lifted off.

At least LBL scored a seat, albeit right next to an extremely large young man who immediately placed a great number of body parts (including his head) firmly into LBL's space. LBL made the almost-five-hour flight seated at a 45-degree angle.