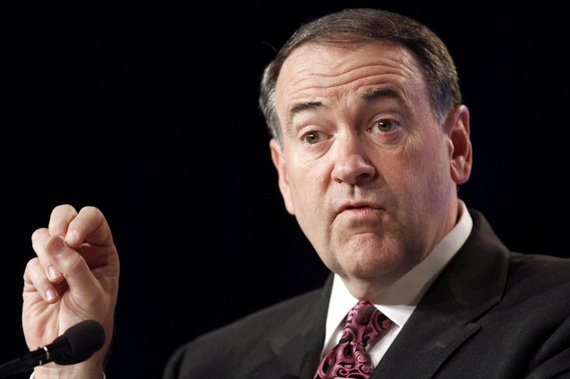 Gov. Huckabee should "grow a spine" of his own and follow through on his recent threat of becoming an independent if Republicans raise "the white flag of surrender" on gay marriage. According to the man who has shaped his entire life on "absolute morals" linked to religious conviction, the GOP will definitely lose one God-fearing conservative if they allow liberals to win the same-sex marriage battle. As quoted in The Hill, Huckabee has no qualms about leaving his political party in order to uphold his beliefs:

Former Arkansas Gov. Mike Huckabee said he would quit the Republican party if it surrenders on gay marriage.

"I am utterly exasperated with Republicans and the so-called leadership of the Republicans who have abdicated on this issue," he said on the American Family Association's talk show that aired Tuesday.

"If the Republicans want to lose guys like me and a whole bunch of still God-fearing, Bible-believing people, go ahead," he said. "And while you're at it, go ahead and say abortion doesn't matter, either. Because at that point, you lose me. I'm gone. I'll become an independent."

Therefore, in an American political arena where pundits and politicians say things simply for shock value, the former Arkansas governor should let his actions speak louder than word. Huckabee believes gay marriage is "inconsistent with nature and nature's law," so it's not just religion, but also his view of nature that bolsters his belief that our government shouldn't recognize the marriages of same-sex couples.

So, by all means, please leave the GOP Gov. Huckabee, but make certain to take the other God-fearing conservatives (who also happen to link their religious beliefs to homophobia) with you when you bolt out of the RNC's offices. This way the Republican Party will become a part of this generation, instead of being stuck in an era when conservatives battled vehemently against civil rights.

The Supreme Court's ruling striking down the Defense of Marriage Act last summer set off a chain reaction of federal judges ruling state bans on same-sex marriage bans as unconstitutional. But at the same time that same-sex marriage rights appear to be advancing, conservative legislators in more than a dozen states have been pushing for exceptions that would allow discrimination against gays and lesbians in the name of religious freedom.

Arizona: Backers of Senate bill 1062 in Arizona say it will protect the religious from being discriminated against because of their beliefs. But what the legislation actually does, according to the Arizona branch of the Anti-Defamation League, is establish an exemption for businesses to discriminate - not just against gays and lesbians, but for any religious reason whatsoever.

Idaho: House bill 426 in Idaho would prevent the denial or revocation of a professional or occupational license for someone who refuses services to, or makes employment decisions based on their religious beliefs.

Georgia: Shortly after the Arizona bill was passed, a similar one began moving rapidly moving through the Georgia legislature.

Kansas: For many Americans, it was Kansas' proposal that first drew attention to the slate of religious freedom bills all over the country that would allow businesses to refuse to serve customers on the basis of sexual orientation.

Missouri: A Republican lawmaker in Missouri has introduced a religious freedom bill similar to the ones being considered in Kansas and Georgia.

South Dakota: Republicans in South Dakota wanted to pass a bill that would have barred lawsuits against a business for "for refusing to serve a person or couple based on sexual orientation," or against people who are "expressing their religious beliefs on the subject of sexual orientation."

Nevada: Last year, Nevada state legislators introduced a bill that would prohibit the government from being allowed to "substantially burden" a person's "excercise of religion."

Shockingly, Mississippi actually did pass a "religious freedom" bill that the ACLU states "still exposes virtually every branch, office, and agency of the government to litigation, which will require taxpayer funds to defend." Even though the Defense of Marriage Act was struck down by the Supreme Court, this didn't stop "Huckabee Republicans." Like true conservatives, they did everything possible to uphold cherished principles that happen to revolve around preventing two other human beings they've never met from marrying.

While he's forming the "Independents against Gay Marriage Party," Gov. Huckabee might want to take a flight to Russia, a country that really knows how to battle liberals on the issue of gay marriage. According to Human Rights Watch, Russia's new anti-gay law has led to "violence and harassment" of its LGBT community:

Russia's anti-gay "propaganda" law has served as a tool for anti-gay discrimination in the year since it entered into force, even though Russian authorities have fined only four people for violating it. The law's adoption also coincided with the spread of violence and harassment of lesbian, gay, bisexual, and transgender (LGBT) people and LGBT rights activists and a rise in homophobic hate speech by some Russian officials and public figures, Human Rights Watch research found.

The law, passed unanimously by the Russian parliament, entered into force on June 30, 2013.

Learning from the Russians on human rights issues is something Gov. Huckabee's new political party should consider. If he ever did fly to Russia to see how Putin has used gays as scapegoats to mask a variety of domestic and international issues, the governor might want to buy plane tickets (with female passengers sitting in between the male passengers, of course) for other anti-gay Republicans.

Gov. Rick Perry this year compared homosexuality to alcoholism, saying, "I may have the genetic coding that I'm inclined to be an alcoholic, but I have the desire not to do that, and I look at the homosexual issue the same way." According to The Charlotte Observer, North Carolina Rep. Robert Pittenger "continued to stand by comments he made earlier this month that businesses should be free to fire employees based on their sexual orientation." As for federal laws, Al.com reported in 2013 that, "The Federal Marriage Amendment measure introduced Friday by U.S. Rep. Tim Huelskamp drew 28 co-sponsors, including U.S. Rep. Mo Brooks, R-Huntsville."

Finally, according to the American Independent Institute, Gary Glenn, who won the GOP primary for a seat in the Michigan state House in 2014, believes states should have the right to criminalize gay behavior:

The American Independent News Network's Todd Heywood asked Glenn if he supported criminalization of homosexuality in an interview last year. "The short answer to your question is yes, we believe that states should be free to regulate and prohibit behavior that's a violation of community standards and a proven threat to public health and safety -- including, as most of the United States did throughout its history, homosexual behavior."

With so many Republicans working hard to overturn the recent gains of the LGBT community, it's almost a wonder why Gov. Huckabee would want to leave the GOP.

Doesn't sound too much like "freedom" but then again conservatives today pick and choose the freedoms that coincide with their religious beliefs. Gov. Huckabee should sleep easy at night knowing that homophobia is alive and well in the GOP, even in 2014 and even with the younger generation of Americans overwhelmingly in favor of legalizing same-sex marriage. According to Gallup in May, 55% of Americans support same-sex marriage, while a whopping 78% of 18-29 year olds in America believe same-sex marriage should be legal. If he does decide to leave the Republican Party (and actually sticks by his word), he shouldn't let the door hit him on the way out. Contrary to Huckabee's view of conservative politics, the world is changing, and a great many Republicans know very well that if they don't adapt to modernity, they'll continue to lose presidential elections. Winning trumps religion in our country, and the GOP will always put winning ahead of religious principles, especially when they realize that pandering to a certain base of voters won't get them the national election results of the past. This isn't Karl Rove's 2004, it's possibly Jeb Bush's 2016.