We have to leave "The Rock."

And I don't mean leaving earth, although that might be a solution if it were possible.

"The Rock" we have to leave is a metaphorical one, but real none-the-less.

While attending college I was a car washer and part-time driver for United Parcel Service in San Diego. Part of my job required walking one-block to a cul-de-sac to retrieve the trucks where the drivers had left them. 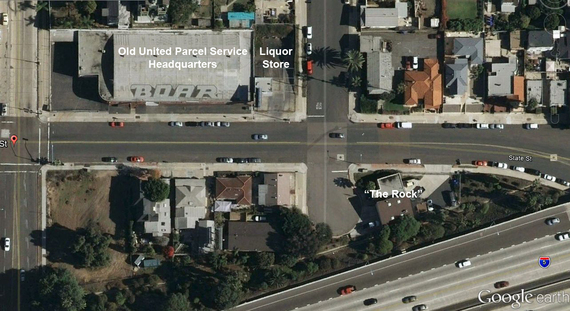 The old UPS building and location of the liquor store and "The Rock" on the cul-de-sac. Image courtesy Google Earth

While I worked, the drivers bought beer at the liquor store next to the UPS building then crossed the street to drink in the empty lot next to the cul-de-sac before heading home. An immense boulder taller than a large man made the empty lot an attractive place to gather. We called it "The Rock."

"If we don't rapidly adopt a clean energy economy, what will future generations think when they learn we didn't have the will to leave "The Rock" and they are suffering as a result?"

I would listen to drivers at the "The Rock" talking about sports, their newest mobile home, boat, motorcycle or pickup truck, and the vacations where they had used those toys. I could have concluded that being a UPS driver was a desirable end goal for me. Drivers were rumored to regularly be worth $1 million dollars upon retirement (and this was in the 1970s). We were all members of the Teamsters Union, guaranteed a salary, health care, and retirement options maintaining financial security until death. I had already been used as seasonal and substitute driver, trained to step into a permanent role when ready. How could there be more?

I appreciate the hard work UPS drivers do. I am glad when drivers bring me packages and that they are fairly-compensated union members. UPS was a good company that gave me the opportunity to work my way through college without amassing debt.

Leaving UPS would mean leaving the financial security of what that company provided in favor of seeking an uncertain future that might be better. I wanted to be a writer, to travel the world, to understand different perspectives, for every day to present new challenges.

I left the certain security symbolized by "The Rock" for the uncertainty of creating a different kind of life.

"If we don't leave "The Rock" voluntarily, another rock will come crashing down on us."

If we don't leave "The Rock" voluntarily, another rock will come crashing down on us. The climate crisis could literally change the face of the planet and economic security as we know it, stripping away our expectations of normality in ways we might not think possible. Here's how:

"Leaving "The Rock" doesn't have to be a story of doom and gloom; it should be a story of creating better places, both locally and globally."

Leaving "The Rock" doesn't have to be a story of doom and gloom; it should be a story of creating better places, both locally and globally. A clean energy world could be a more secure one both economically and environmentally. According to a March 2016 report by the non-partisan business group Environmental Entrepreneurs (E2), more than 2.5 million jobs in the U.S. are already attributable to clean energy. We don't have to abandon the lifestyles we enjoy. We don't have to lose the benefits a fossil-fuel-based society has provided us unless we refuse to transition to a new security based on renewable, clean energy sources.

As an aside, UPS moved to a bigger, better place where the firm's economic security was more assured. Where "The Rock" once stood is a fire station, fittingly a symbol of crisis response rather than security. Fitting because the crisis we face on the planet requires rapid response to address the threat of climate change caused by fossil fuels. 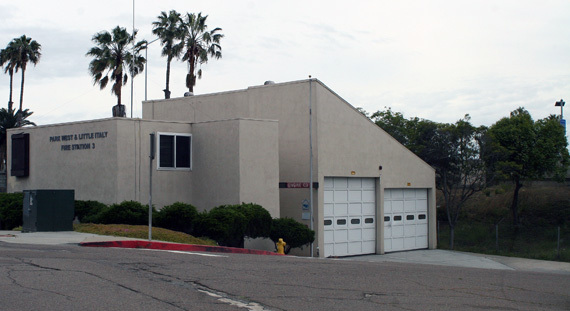 The cul-de-sac now with a fire station where "The Rock" once stood.
Image courtesy the author.

There is no doubt we have to leave "The Rock" by choice and transition to a clean energy reality. Two questions remain: