The ax is falling hard, and fast, on Lebanese journalists as media cut budgets, hire younger staffers, increase their online presence, seek cheap solutions, duke out their political and sectarian differences, but still fumble over monetization and quality content.

The latest victim is Dolly Ghanem, a veteran anchor and morning talk show host on LBCI TV, who was shoved off newscasts in 2011 and relegated to second fiddle talk show ranks before being laid off. 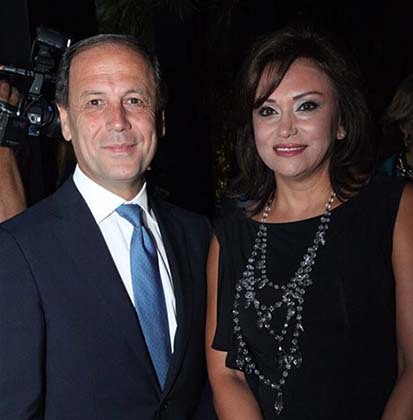 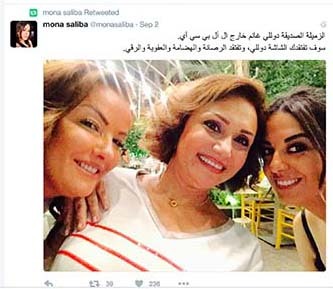 The reason for her dismissal: "Too many other hosts for the (one) show, notably since I'm a contracted presenter while the others work in the news department," she told the daily Annahar about LBCI CEO Pierre El-Daher's meeting with her.

Talk show host Rabia Zayyat of Al Jadeed TV fame tweeted: "With the absence of broadcasters of Dolly Ghanem's stature and caliber, the biggest loser is the viewer."

Ghanem's husband George, who she first met at work, was another veteran anchor and editor given the pink slip in 2012 after falling out with El-Daher. They were among the first LBCI TV staffers when it was founded.

Ageism is undoubtedly one factor.

"There's bullshit LBCI is showing that insults it and its image 31 years after its launch," wrote Fatima Abdallah in Annahar about the network's comedy shows that seek to titillate - rather than entertain - by appealing to the lowest common denominator, and in search for profits.

The news budget takes a back seat to entertainment, as in much of the media world.

But Abdallah's own paper has also felt the pinch and in recent years pared down its staff while trying to boost its online and social media footprint in a bid to make up for lost advertising revenue and dwindling circulation.

Reporters haven't been paid in months, a journalist there said, and if they do get something, it's in increments from their late salaries.

"As long as I'm alive, I won't allow the closure or the silencing of Annahar," editor-in-chief Nayla Tueni said in a state-run Télé Liban interview in June.

She wears a second hat as a member of parliament representing a district in the capital Beirut. 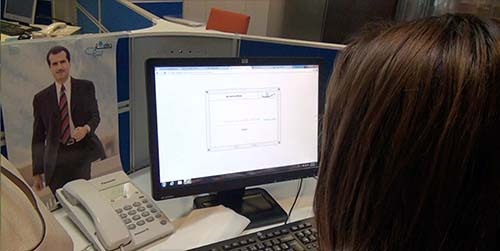 Annahar staffer with Gebran Tueni's picture on her board (Abu-Fadil)

Tueni's father Gebran, the paper's former publisher and a legislator for the same seat was assassinated in 2005, and her late grandfather was editor-in-chief.

The chopping block is out in full force for workers at Future TV, Al Mustaqbal newspaper and other media operations owned by the Hariri family.

Former prime minister Saad Hariri, whose father Rafic was also premier and was also assassinated in 2005, reportedly promised his media loyalists who still haven't jumped ship the money was forthcoming, but most haven't seen a cent in months.

Reports in other media mention massive layoffs - maybe 360 - at Hariri's organizations, including his political party, in large part due to mismanagement and the loss of major funding from his Saudi patrons thereby affecting his business ventures. 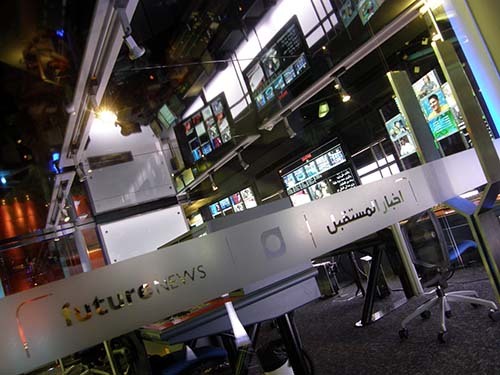 "There is nothing at the TV at the moment," said one well placed insider. "I'm hearing it's true regarding Tayyar Al Mustaqbal (the political party). They might be laying off some (people). Still nothing official."

A presenter at Future TV said it was a wait-and-see game but the slow bleeding seems unstoppable, unless there's a substantial infusion of funds into the ailing operation.

Asked if it was stressful being in a holding pattern, the veteran replied: "Yes, it is. More than you can imagine."

At a time of great economic hardship in Lebanon due to countless domestic and foreign political setbacks, rising unemployment, competition from regional media, insecurity in a highly volatile region, and pressures from hosting upwards of 1.5 million refugees from neighboring war-torn Syria, the media layoffs couldn't come at a worse time.

Assafir newspaper, for years Annahar's chief rival, came close to total extinction in March when publisher/editor-in-chief Talal Salman issued an internal memo telling staffers on the eve of the paper's 43rd anniversary that it faced exceptionally difficult circumstances brought on by the information revolution (social media), instability in the Arab world as well as political and social conditions in Lebanon.

A month later, Salaman tweeted he'd decided to shut down the paper in an impulsive moment and feeling of disappointment but that Lebanese (readers') reactions had embarrassed him, so he kept it going, presumably after securing funding to maintain a skeleton crew.

The decision to remain in business, become an online publication, or disappear from the map has left everyone guessing for months.

In May, Al Modon, an online publication headed by a former Assafir editor, reported that 45 of the paper's staffers were being axed. The piece was headlined "Assafir cuts off its own flesh."

Last month reports emerged of Assafir putting up parts of its PDF and caricature archives for auction to the highest bidder.

Most Lebanese newspapers have relied heavily on local and foreign financial patrons over the years, including governments.