With Lebanon suffering one of the world's slowest internet connection speeds, it is certainly not surprising that social media hasn't picked up in this country as quickly as it did in other parts of the globe.

However, while it is understandable why a Lebanese web-surfer might avoid being heavily dependent on sites like YouTube, where uploading or even viewing a video file would take a substantially long time, it was never quite clear why only two years ago, there were only 634 users on Twitter, the extremely light micro-blogging service. (Dubai-based SpotOn PR research -- July 2009) Perhaps because like many people around the world, the Lebanese initially didn't get the point behind Twitter! 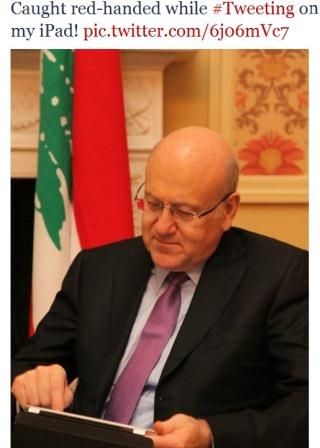 After all, they already had and loved Facebook (which is home to 1.3 million people of a total population of over 4 million, according to Socialbakers.com).

Now, Twitter was never known for photo-sharing, a feature which was significant in bringing the gossip-lovers of Lebanon to Facebook. Most probably, Mark Zuckerberg never anticipated that his free social network would serve as the new Layalina (a premium-priced Lebanese 'society magazine' which along with its sister publication Mondanite, is known for publishing pictures of people out and about). Evidently, the Lebanese didn't mind the waiting time when it meant they could flick through images of Beirut's best parties and social events. Even with the Arab Spring effect, the total number of Lebanese users on Twitter is estimated to have gone up to only 80,000. Despite the significant increase, the figure remains dwarfed by the fact that roughly one in every four Lebanese are now using Facebook in some capacity.

Yet, just when it seemed there was little hope for Twitter in Lebanon, the site finally got its "moment" earlier this week, thanks to both the current and former prime ministers of this country. Now, it should be noted that several Lebanese politicians, most prominently current PM Najeeb Mikati (who opened his Twitter account last September and now has over 7,000+ followers) have been experimenting with the wonders of the world-wide web for a quite a while. The highlight of these experiments came recently, when Mikati and British Ambassador to Lebanon Tom Fletcher had a live 'Tweebate' which sparked a lot of interest and generated a large chunk of headlines globally.

Following the event, Mikati tweeted that "social media is helping build digital diplomacy as a form of parallel public diplomacy".

However, it was activity by Opposition Leader (and former prime minister) Sa'ad Hariri who brought the matter to a boiling-point. By last Tuesday, Hariri has had his fifth Q&A session and managed to generate controversy with each of them, along with 22,000+ followers. 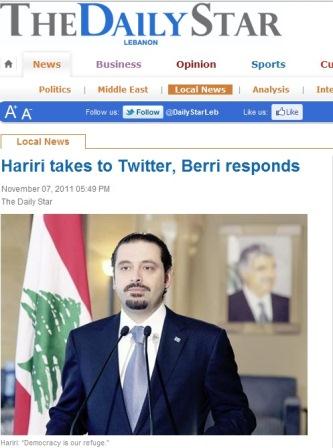 Hariri tweeted: "No voting for [Parliament Speaker Nabih] Berri anymore if we win election" in response to a question. The following day Berri gave Twitter the ultimate bow of recognition when he responded to Hariri's tweet with a statement criticising the former PM.

"Hariri has revealed in his electronic interviews a number of his personal hobbies, one of which is diving," Berri's statement said.

"The Lebanese have also discovered a new hobby of the 'shaikh' [referring to Hariri] which is politics. Better he dive in the former than the latter," concluded the statement. Hariri also generated headlines by pledging a return and by criticising the Syrian regime which he said was committing a "massacre" against its own people.

Of course, being a member of the opposition, Hariri has more liberty to tweet at ease, while Mikati would probably be much more restricted when it comes to expressing his views given the sensitivities of his position.

In all cases, Hariri's recent activity on Twitter didn't pass without criticism, not just by Berri but by other opponents as well. An editor on the website for Hezbollah's Manar Television described him as "active... only Twitter".

However, given that it was the heated discussion between Berri and Hariri that has sparked so much interest, one wonders if it is the "digital un-diplomacy" which really gave Twitter its dawn in Lebanon.