Life is not going well for Will. His girlfriend of four years walked out on him. His job in advertising is going nowhere. His mother is remote and cold. Then his father dies.

So Will drives from his home in Philadelphia to Lebanon which is two hours west for his father's funeral and to sell his house.

Hardly knowing his father, Will shows little emotion during the funeral. Not interested in rushing back to his less than satisfactory life in the city, he delays selling the house to hang around the town. He meets the family across the street, which are his cousins -- and they're slightly off keel -- learns things about his father, and in a tavern suddenly falls in love with a woman. But she's married and small town so that's doomed.

Lebanon, PA begins with life moping along, yet the acting is powerful. It is this gray background with colorful characters that slowly reels you into the story. For Americans raised with the media screaming "if it bleeds, it leads" and today the Internet-twitter posting stories with no time for context -- often no time for truth -- a film that actually evolves rather than explodes out of the starting gate requires patience. With Lebanon, PA your patience is soon rewarded.

Will, played subtly by Josh Hopkins, inches toward a mid-life crisis, yet avoids a full crisis. On the other hand, CJ, an impetuous, bright 17 year old girl from across the street, does have a full-blown crisis. She confides to her new friend from Philadelphia that she is pregnant. "What are you going to do?" he asks. "There are options," she replies, "none are good, some are less bad."

Yes, when pregnant at 17, there are no truly good options. 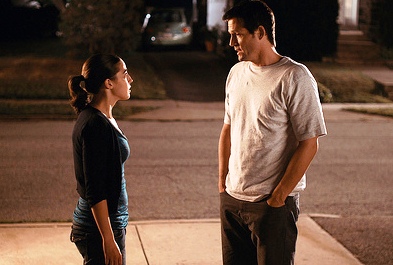 The context for this film is the great American political battlefield - dumbed down to 21st century screaming. With two barking armies that view themselves as enlightened and the others as moronic, this war tears the social fabric of America. It is the urban clashing with small town/rural, the dogmatic liberals against the closed-minded conservatives, the Tea Party battling the Left. Everywhere certainty is set in cement and tolerance is banished from the mind. We know all about that.

And this cultural-political war divides our national politics on issue after issue: freedom of guns verses control of guns, lazzie-faire capitalism verses compassionate capitalism, pro-life verses pro-choice. Entrenched positions on both sides of a cultural divide where cooperation is a dirty word and confrontation is the holy grail. Meanwhile, the media chronicles the continuous political firefights, reporting every violate verbal stone thrown, while ignoring the human tragedies caught in between these two armies locked in endless battle. This we often overlook.

Lebanon, PA zeros in on this "in between" terrain, on those trapped between the two political armies, those struggling to decide what is right, those in the grip of heart wrenching pain, those watching the nasty repercussions on their families and friends -- there is a lot of bad when there are "only less bad options." All of this is portrayed with rawness and tenderness through one teenage girl with one big decision.

CJ, smart yet naive, overwhelmed with the decision she must make, is played brilliantly by Rachel Kitson. She is believable and pulls your emotional trigger. Her father, Andy, played by Ian Merrill Peakes, packs a pair of scary flaming eyes as he struggles not to implode, yet he also reveals a tender, loving side toward his struggling teenage daughter. There is the slightly elusive and delicious looking Vicki, Samantha Mathis, bored and unhappy, but she won't leave Lebanon or her husband. Will, the main character -- although CJ's struggle is the heart of this drama -- is the most ambiguous character. He is at the center, yet the story's fire comes from elsewhere. He plays his emotional notes delicately. Throw in Mary Beth Hurt as his cold mother, and Hunter Gallagher as CJ's mischievous brother, and together it's one very powerful acting package.

Whether CJ decides to have a baby or have an abortion is not what is important in Lebanon, PA. This is about the journey to making the decision. It is about one 17 year old girl and what she endures and struggles with to make the extremely difficult decision. Will is there, as is Viki, but not as pro-choice or pro-life. This is about the human wreckage between the two political armies, the human wreckage our media never seems to see. And this is a story that even the two armies, if they can open their minds, can appreciate.

Ben Hickernell, the writer and director of Lebanon, PA, has created a superb bittersweet drama that's low key until it works itself up into a real tornado. He has courageously taken on the cultural divide and the political war in America, and smartly by exposing the human story behind the political headlines. While entertaining us, Hickernell has given us much to think about.