There's no shortage of coverage of the stunning performance of LeBron James in the NBA finals, nor of his Prodigal Son, return-to-Cleveland tale. Even so, he's widely regarded as a son of Akron, which makes perfect sense since he was born and raised there. But few realize that when he rebounded to Cleveland last year, he was - in a very real sense - going back to his roots. Whether LeBron knows it or not, three generations of his family once called Cleveland home.

LeBron has classic, Great Migration heritage, and two branches of his family tree made their way from the South to Cleveland. The Gay family was first, arriving from Conyers, Georgia in the 19-teens, and just a few years later, his Anderson line ventured there from Hardeman County, Tennessee. The two families were united through the marriage of LeBron's great-great-grandparents in 1926 (above).

Four years later, one of his great-grandmothers would be born in Cleveland, and the 1930 census captured three generations living together at 3158 East 82nd Street. 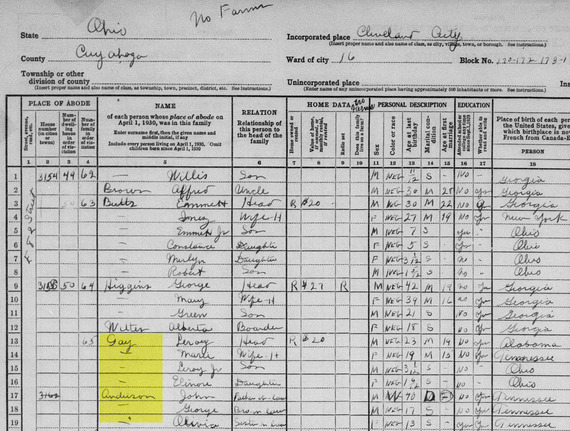 So last year's return to Cleveland was a homecoming in more ways than one, and as to Tuesday's game, Lebron's ancestors may very well be a bonus sixth man.