Following the Cleveland Cavaliers' surprising collapse in the Eastern Conference semifinals last week, fueled in part by LeBron James' sloppy play, rumors began to spread across the internet. One email making the rounds claimed that LeBron James' mom (PICTURES) and Cavs teammate Delonte West were involved in a scandalous affair that destroyed the team's ability to play together.

TEXT OF THE EMAIL ALLEGATIONS:

My uncle is the general contractor at the Q and has been for the last 7 years. He is good friends with a lot of guys at the Q including some of the bigger boys in the organization and knows Gilbert personally. I was just told from my brother that a very reliable source informed my uncle that Delonte has been banging Gloria James for some time now. Somehow I guess Lebron found out before game four and it has destroyed our chemistry and divided our team. This is no joke, the only player worse then Lebron has been Delonte. I am not making this up, I wish it wasn't true but it happened. Wait and see if lebron stays you will not see Delonte in a cavs uni again.

Of course, while there was virtually no foundation to the chain email, at least one web site reported it as fact.

Finally, a source close to James is denying the allegation. TMZ has obtained a cease-and-desist letter sent to the web site that published the rumor. LeBron James' attorney slams the gossip as "irresponsible speculation" that "was so idiotic and 'off the wall' that we did not think it even warranted a denial." Further trashing the rumor, Frederick Nance writes, "No thinking person could possibly believe such rubbish."

The email also includes a firm denial, calling the speculation "categorically false and per se defamatory." Scroll down to see the email, and click here for TMZ's full report. 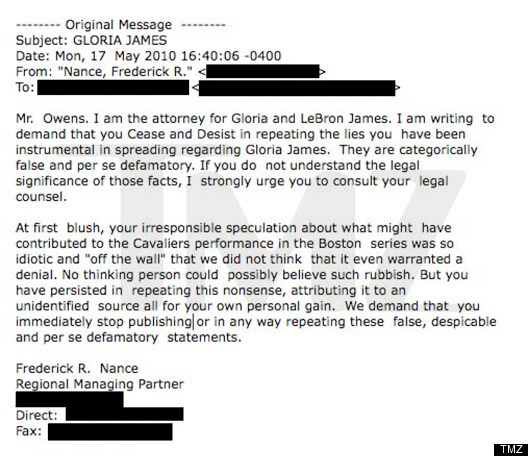