The Cleveland Cavaliers will be in New York playing the Knicks this week, but some players, including LeBron James, have decided against staying at the team’s scheduled accommodations: the Trump SoHo.

The accommodations were arranged before the 2016 presidential election. President-elect Donald Trump does not hold equity in the property, according to the Cleveland Plain Dealer, but like many Trump-branded properties, the president-elect holds a licensing agreement with the hotel.

James told reporters on Wednesday that his decision was his “personal preference” and that he was not trying to make a political statement.

“At the end of the day, I hope he’s one of the best presidents ever for all our sakes,” he said.

LeBron James: "Not trying to make a statement" by declining to stay in Trump hotel, "just my personal preference." https://t.co/dg3oXERVdX pic.twitter.com/nCjYFKeILf

Cavaliers General Manager David Griffin told the Cleveland Plain Dealer the defending champions were given the option to stay elsewhere. “Griffin said upwards of half the team ― the Cavs travel with 14 players ― may not stay there,” the Plain Dealer reported.

The team has made plans for a “group that wants to be elsewhere to be together elsewhere,” Griffin told The Associated Press.

Earlier this month, three NBA teams ― the Milwaukee Bucks, Memphis Grizzlies and Dallas Mavericks ― announced they would stop staying at Trump-branded hotels “to avoid any implied association” with the president-elect. While the Cavaliers were not one of those teams, James was a vocal supporter of Democratic presidential candidate Hillary Clinton, endorsing the nominee one month before the election.

“If basketball has taught me anything, it’s that no one achieves greatness alone. And it takes everyone working together to create real change,” James wrote in his endorsement.

James also campaigned with Clinton in Cleveland just days before the general election.

James posted an impassioned message following Trump’s election, reminding followers that the country will be “alright” and that children can still “change the world.”

As I woke up today looking and searching for answers on what has happened this song hit it right on the head! If we continue the faith(as hard as it may be to do so) we will BE ALRIGHT!! Parents and leaders of our children please let them know they can still change the world for the better! Don't lose a bit of faith! They're our future and we must remain stronger than ever!! Yes we all wanna lace up the boots, put on the hard hats and strike but that's not the answer. Love, genuine LOVE and FAITH will be the only thing that can get us through this. Minorities and Women in all please know that this isn't the end, it's just a very challenging obstacle that we will overcome!! The man above will never put something in our paths that we can handle no matter how difficult it may feel/be! To all the youth out there I PROMISE I'll continue to lead u guys every single day without no hesitation!! Time to educate and even more mold my children into being the greatest model citizens they can become in life! They will continue the legacy beyond life! Lastly, Even if whos now in office doesn't, Know that I LOVE YOU'LL!!!

This post has been updated with comments from James.

PHOTO GALLERY
Some Of LeBron James' Most Intense On-Court Expressions 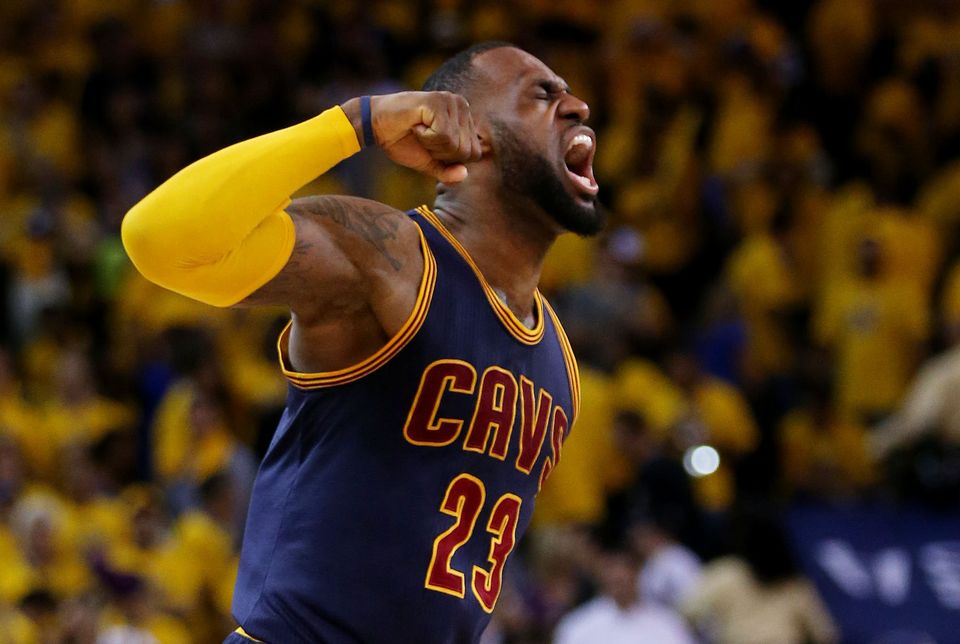 1 / 9
OAKLAND, CA - JUNE 07: LeBron James #23 of the Cleveland Cavaliers celebrates their 95 to 93 win over the Golden State Warriors in overtime during Game Two of the 2015 NBA Finals at ORACLE Arena on June 7, 2015 in Oakland, California. NOTE TO USER: User expressly acknowledges and agrees that, by downloading and or using this photograph, user is consenting to the terms and conditions of Getty Images License Agreement. (Photo by Ezra Shaw/Getty Images)
Ezra Shaw via Getty Images