NEW YORK (RNS) He’s been crowned the “new hip-hop king” and his newest album, “Anomaly,” topped iTunes and Amazon charts the day of its Sept. 9 release. He’s been invited to birthday parties for both Billy Graham and Michael Jordan and riffed on NBC’s “Tonight Show” with host Jimmy Fallon.

It’s the kind of mainstream success that has eluded most Christian rappers. Then again, some people are still trying to decide if hip-hop star Lecrae is a Christian rapper, or a rapper who happens to be Christian.

It depends who you ask, including Lecrae himself.

“God has also raised up lowly, kind of insignificant individuals to do miraculous and incredible things,” Lecrae, 34, said in an interview. “We’re the Gideons, we’re the Davids. Even Jesus himself made himself of no reputation. It’s when you can link it back to God doing it, I think that’s what he loves. He’s not a megalomaniac, he’s deserving of glory and honor, and to use individuals that demonstrate that it was him, and him alone, it accomplishes his mission and that’s success.”

While most Christian artists have struggled to break out of the Christian music subculture, Lecrae has found early crossover success — and a significant following among white evangelical elites. He navigates the tricky waters between rapping explicitly about Christianity while reaching a mainstream audience.

According to Billboard, he’s sold 1.4 million albums and 2.9 million track downloads. “Anomaly” hit Billboard’s No. 1 last week — a first for a gospel album and only the fifth for a Christian album. His acting debut in “Believe Me,” a film about a group of four men who try to con money out of churchgoers, received a short, positive nod from The New York Times.

Some of Lecrae’s fans are worried the success could ruin him or at least soften his lyrics. But when Christian artists like U2′s Bono or Switchfoot find mainstream success, many Christian fans often latch on for good.

In fact, while once shunning mainstream and creating its own music and entertainment subculture, American evangelicalism now values recognition and engagement in mainstream culture.

Giglio recently ran into Lecrae in their hometown airport in Atlanta, praising the artist for his recent success. “It’s only hors d’oeuvres for heaven,” Lecrae responded.

“Because, in ‘Anomaly,’ like some of Perry’s films, the Christianity sneaks up on you,” Browne wrote, linking “Believe Me” to a string of other recent successful Christian-themed films. “It’s clear there is a market for Christian-themed pop culture.”

Lecrae, who attends the start-up Renovation Church in Atlanta, isn’t sure what to make of the “sneak up” language.

“Obviously, to the conservative evangelical, or the Christian, they hear ‘sneak’ and they think, ‘Why do we have to sneak?’” he said. “But when we hear that from somebody outside of the Christian culture, in many ways they mean that as a compliment.”

If Lecrae is “sneaking up” with Christian themes, then his lyrics will slap listeners in the face as he regularly raps with explicit themes on faith. Anomaly’s song “Fear,” for example, includes lyrics from Psalm 23 and repetitive mentions of Jesus.

I’mma tell that truth till it kill me

And I’m chillin’ with my Creator

To all of my haters

For the ones that think I forgot Him

And the ones who won’t let me say

I ain’t scared no mo’

“Without saying it — because it wouldn’t be very Christian of him — the ‘Jesus, Jesus, Jesus, Jesus, Jesus’ is a cleverly devout middle finger to all of his haters,” Browne wrote in Grantland. “He’s directing it toward everyone who’s criticized him — for being too spiritual and for not being spiritual enough. This is what happens when you’re caught between genres. It’s this middle ground that makes Lecrae different. And that feeling different — not Christianity — is what this album is truly about.”

Lecrae has received favorable attention in recent years from white evangelicals, particularly the neo-Calvinist Reformed crowd that is influenced by John Calvin, the 16th-century French theologian. Lecrae’s 2008 song, “Don’t Waste Your Life,” is the same title as a book from retired megachurch pastor John Piper, the high priest of Reformed evangelicals.

“I think a lot of us became Christians in a hodgepodge, because doctrine was not a thing; we weren’t considering theology,” Lecrae said. “We were just like, ‘Hey, we love Jesus, let’s go.’ I’ll read this Piper book, and go to this T.D. Jakes conference, we just absorbed everything. I think the Reformed doctrine just presented a lot more organized, drawn-out theology. I could wrap my mind around it, and it wasn’t as mystical.”

Just as Lecrae is building bridges between secular and Christian audiences, leading evangelicals say hip-hop can bridge the divide between largely white churches and the changing world around them.

“Maybe it’s about building a bridge in the other direction: a bridge of empathy for a largely white, middle-class church to a fatherless, economically forgotten, and sometimes angry youth culture,” wrote Russell Moore, president of the Southern Baptists’ Ethics & Religious Liberty Commission, in a cover story for Christianity Today last year.

“If so, maybe it can help pull American Christianity out of its white middle-class ghetto and into the vastness of the kingdom of God — a kingdom that has room for both Jonathan Edwards and Jay-Z.”

Lecrae can name-drop influential theologians with the best of them, including Piper, Randy Alcorn, Francis Schaeffer, Abraham Kuyper and Charles Spurgeon. It wasn’t until the end of his thought that he mentioned Martin Luther King, Jr., whom he references in his music.

“I love looking back and being able to understand that nothing we are dealing with is necessarily new, just understanding how people wrestle with things historically and how I can apply that to the present,” Lecrae said.

He’s also probably the only rap artist to drop the name of New York megachurch pastor Tim Keller, or Christianity Today executive editor Andy Crouch, into his lyrics. Both men, he said, “influenced me to think about how I get involved in culture, and how do I become a culture creator and not just copy it or condemn it or critique it all the time.”

He has been praised for calling out the rap industry for being self-contradictory when speaking on racial issues like the recent uprisings in Ferguson, Mo. “Dear Hip Hop, we can’t scream ‘murder, misogyny, lawlessness’ in our music & then turn around and ask for equality & justice, ” he told Billboard.

Racial reconciliation, he said, is grounded in theology.

“I think racial reconciliation is really rooted in the reconciliation that we see in Scripture,” Lecrae said. “I think you begin to find yourself being reconciled to people all over the place, and just wanting to empathize with people from all walks of life, specifically as a Christian, to demonstrate the love of Jesus.”

‘A courageous message in a safe package’

Like many rappers, Lecrae, now a married father of three, had a rocky start. Abused and later abandoned by his father, his song “Good, Bad, Ugly,” raps about hooking up with a woman and helping her get an abortion.

He said a police officer pulled him over, saw drugs in his car but let him go when he also spotted a Bible in his car, telling him to read it. Lecrae decided to mend his ways after he survived a crash where his car had flipped over, he said.

In his recent album, Lecrae indicts the spoils of Western excess, American exceptionalism and Christian hypocrisy. One of his friendly critics, Bradford William Davis, called his latest album “a courageous message in a safe package.”

“They’re good, necessary subjects for the hip hop community to wrestle with, but nothing that the cut-rate ‘conscious’ rappers haven’t tackled before,” Davis wrote in his review for the Christ and Pop Culture website. “His presentation is clean, mostly safe, occasionally dated, and a little too predictable.”

Lecrae isn’t bothered by his critics.

“Talking about social issues, talking about love, talking about marriage, child rearing, those are all things that are explicit to who I am as a believer,” Lecrae said. “It’s not just the topics, necessarily, of salvation or sanctification.”

PHOTO GALLERY
Music in the Bible 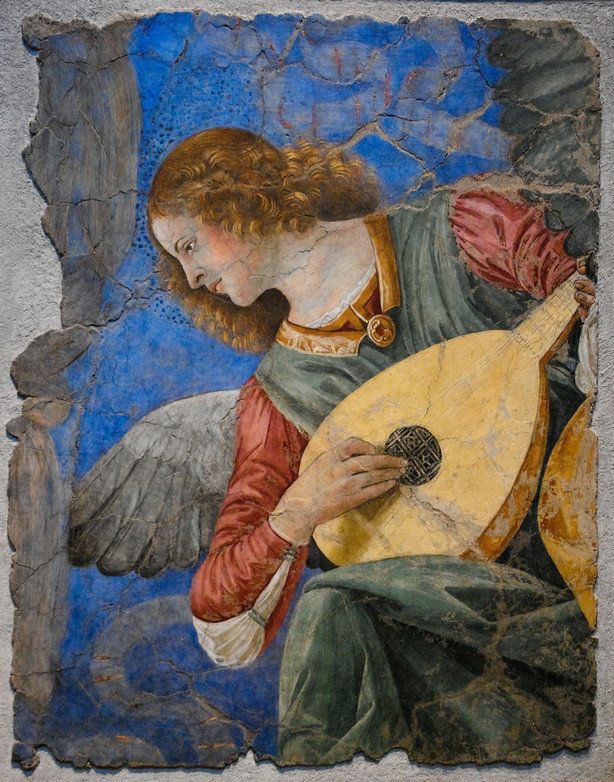