For those in the know, the name Lee Miller usually evokes topless picnics with Man Ray along the Riviera, an icy blonde modeling a violently violet hat on the cover of Vogue and some of the most striking photographs from the liberation of the Buchenwald and Dachau concentration camps at the end of the Second World War. But Miller is not as widely remembered for two of the most salient loves of her life -- her culinary prowess, and her lifelong passion for the transformative power of fashion -- associations that are now receiving several, second, critical appraisals.

Indicative of this paradigm shift, the International Association of Culinary Professionals honored Miller at their annual conference at the James Beard House in New York City on March 31st, with senior researcher and lecturer at Yale University Becky Conekin and editor of the Lee Miller Cookbook Karen Hagen, leading discussions on Miller's life in both arenas. Conekin took a bit of time out her busy schedule, which includes research and writing for her forthcoming Lee Miller in Fashion (Thames & Hudson, Autumn 2013) and Eugene Vernier: Fashion, Femininity, and Form (Hirmer Verlag, 2012), to educate me on Miller in the kitchen and in the closet.

The relation between fashion and food is not difficult to construct. Both can be sources of pleasure, but they can also be mechanisms for discipline and denial, self-judgment as well as self-expression. Like most art forms, the mastery of the hautest couture and cuisine frees the cook and the clothes horse to have fun, to shock and to disregard the dictums of so-called arbiters of taste. But the dark undercurrent to this mastery is often a self-flagellating obsession with quality control. To revere the beauty of fashion or figure is to bemoan its absence -- a recipe for unhealthy and unfashionable secret excesses of spending and starving if there ever was one.

Underlying both disciplines is the illusion of control -- the body's shape can be controlled by what is put in it, and its aura can be transformed by what is put on it. As Conekin notes in "Another Form of Her Genius: Lee Miller in the Kitchen" in the Winter 2010 issue of Gastronomica, Miller's early years were marred by rape, serious medical conditions and a boyfriend's sudden death, and these arbitrary tragedies seem to have fostered in her an affinity for control.

Living in New York City in her late teens, Miller was snatched by Condé Nast out of the way from a car careening down the street one day, and was made one of Vogue's most popular models -- George Lepape's famous cover of the blonde in the purple hat, published 85 years ago this month, featured none other than a coy Miller. With her temperament ill-suited for long periods of passive posing, Miller moved to Paris and jumped behind the camera, taking some of the era's most iconic fashion photographs and becoming Man Ray's muse, student and lover. After a tempestuous split from Man Ray several years later, Miller packed her bags for Cairo, where she settled into a stultifying marriage with an Egyptian aristocrat. After shooting the Egyptian scenery in all of its possible Surrealist iterations, Miller moved back to Paris, where she met the man who would become her second husband, Roland Penrose.

Then came the war. When American troops landed in Europe, Miller became Vogue's war correspondent, and chased devastation, revolution and recovery across the continent for the next two years, armed with only her wits and her camera. Although the commonly-told story of Miller's life says that her return to fashion photography in postwar London bored her, Conekin discovered thousands of unpublished photographs from the period that illuminate how active her imagination still was. In one such image, models in bright silk dresses are juxtaposed against the rubble that still strew the streets of much of Europe -- a haunting reminder of the recent devastation.

But Miller was privately wrestling with depression, and caring for her newborn son, Anthony. Acquiescing to Roland's wishes and leaving behind the London she loved so much, Miller moved with the family into Farley Farm in Sussex, England, and created a countryside salon for the who's who of the art world, with everyone from Picasso to Man Ray to Max Earnst coming to spend late nights around the kitchen table, fueled by Miller's mixology and evolving culinary prowess. She spent hours in the kitchen, deciphering the minute differences in cooking temperature, time and ingredients that make all the difference in high cooking. "For Lee Miller, the kitchen was rather like the darkroom," Conekin said. "With serious cuisine, one prepares and sets up the plates, decorating them, garnishing them, in a way that could be seen as similar to styling and setting up a fashion photograph."

The kitchen was Miller's domain, where she could be both the creator and editor of her work. Creating in the kitchen, she was no longer beholden to conservative publishers, who feared her incisive snapshots of exuberant hats and gowns in the midst of wartime austerity would offend readers who desired escape in the pages of a fashion magazine, and didn't appreciate adornment's ability to persuade. Towering, Marie Antoinette-esque hats, for example, became symbols of "a sort of contest between French imagination and German regulation," according to a 1940s Vogue piece Conekin described.

If some have seen Miller's later life as a "retreat" into the kitchen and a waste of her talent, they miss what the joy she took in cooking reveals about the evolution of her relationship with control. If her original desire to buffer herself from the pain of life's fatalistic twists by freezing the world forever in perfectly constructed photographs, the final iteration came in the kitchen, where her masterpieces were, however perfect, impermanent, created and designed to be consumed.

When Condé Nast learned Miller had been hired at British Vogue (nicknamed Brogue), he telegrammed to express his enthusiasm for her -- "INTELLIGENCE, TASTE, SENSITIVENESS {and} ART VALUES." "I think you can see this in her recipes, menu planning, and inventive meals, as well," Conekin said. Miller's life in food is in so many ways homage to the discipline and appreciation for the rare she learned in fashion. Were Miller to learn that chefs from the James Beard House were mixing some of her most famous cocktails and replicating her rose canapés, she might be surprised, as her war photography vastly overshadowed the other endeavors during her lifetime. But what Miller's work in the closet and the kitchen serves as the most enduring reminder of, is that layers of human experience lie underneath every work of art, and that it is not for lack of talent that art is sometimes more point of view than critical acclaim. 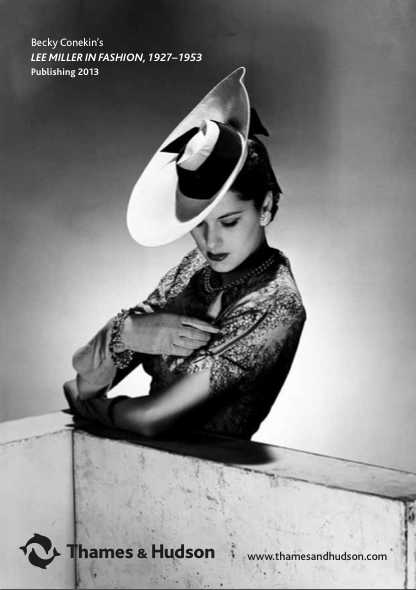