I first heard of the knives of my native Lefkada a long time ago when an important collector arrived, seeking out the few remaining specimens of the renowned blades of the Ionian island that were, for years, meticulously handcrafted by the artisans of the local village of Poros.

This brought to mind the memoirs of my grandfather in which he described a most ornate knife he received as a wedding gift and which he considered most precious. Much later, I, too, was the fortunate recipient of such an exceptional piece from the hands of my cousin, Philip Politis, who learned the traditional art of knife-making from the last surviving craftsmen of Lefkada and who was able to add his talent and education to the process. 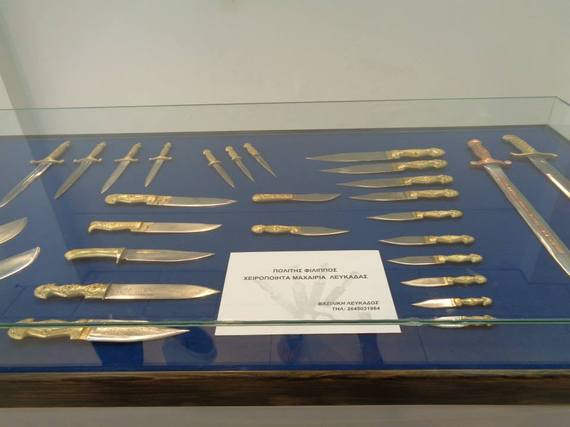 This past summer, I had the privilege to visit the exhibition entitled "Lefkadian-Poros Knives," at the quaint Charamoglios Library of Lefkada, where I discovered a fresh crop of knife-makers that learned this unique craft from the last surviving master in Lefkada, Telis Vlachos.

At the exhibit, I came across impressive samples of Lefkadian knives, true works of art, in a variety of sizes and sporting intricately decorated handles made by four new talents: Dionysis Lazaris, Philip Politis, Spyros Robotis and Stathis Chalkiopoulos.
What struck me is that etched into the blades of these knives, whose primary use was as objects of violence or self-defence, were beautiful poetic lyrics, indicating that the craftsmen of the time were fascinated by the art of libido. It was this oxymoron, that of violence and romance together, that piqued my interest in these peculiar items.

The art of the Lefkadian knife derives from Italian times (1684-1789) when the Venetians captured the island from the Turks and organized the economy along the lines of trade unions so that the local residents could become more productive. This brought about the emergence of professional organizations of blacksmiths, carpenters, and coopers skilled in the art of barrel-making. The knife-making guild was centered around the village of Poros with the Katopodis family playing a leading role.

It was not long before the knives would gain fame not only for their unmatched strength and flexibility but also for their splendid decoration and the emblazoned lyrics that would often champion the bravery of the knife's owner.

The technique of "painting the steel" with oil during the forging process was the secret of the Lefkadian knife's strength. To demonstrate its durability when making a sale, the craftsmen would often carry steel nails which they would proceed to "slice" in half.
It is for this reason that the daggers became the weapon of choice of many, including the various rebel gangs that sprung up in the 60s.

Eventually, the knives would come to be used in other areas with their exceptional durability sought after by butchers and swordsmen. More recently, still others, such as Spyros Argyros from the mountainous Lefkadian village of St. Elias, have begun to manufacture the knives to be used as cutlery.

For a time, in 1936, their use was abruptly interrupted by a law drawn up by the dictator, Metaxas, which completely forbade the use and carrying of weapons. Following the enactment of the legislation, the last craftsmen of Poros would leave Lefkada and relocate across the bay, in Aitoloakarnania, where some would continue crafting butcher knives.

Another survivor and member of the Katopodis family would take up permanent residence in the nearby town of Astakos, on Greece's mainland, teaching his art to, among others, Panagiotis Rigalos from the village of Karaiskaki Etoloakarnanias. The steel of the knives of "Craftsman Panos," as he is known, is still "stained" in the traditional manner and his masterpieces are considered pure genious.

In February of 2010, the Lefkada Art Center hosted a series of seminars in which a group of devotees were taught the art of authentic Lefkadian knife-making by the folklorist Spyros Sklavenitis. The great craftsman, Telis Vlachos, a disciple of Stavros Katopodi, was on hand to demonstrate the construction of these particular objects to 20 avid students, half of whom are currently manufacturing the knives in the conventional way.

As for the exhibition, I was taken aback by the authenticity, perfection and finesse of the Lefkadian knives which, from their origins as lethal weapons, have evolved into exceptional works of art. And by the young craftsmen, under the guidance of Telis Vlachos, who are carrying on a tradition that should not be lost in the mists of history.