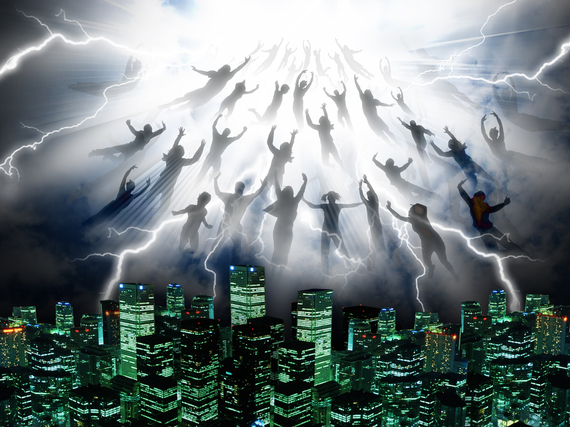 Warning: if you open the links mentioned in the "Sources" section at the end of this column, your agenda of other things to read may well be left behind. The "Sources" list just a few reviews out of many dealing with the film that opened over the weekend, Left Behind.

I, for one, became so engrossed that I lost a weekend morning reading these reviews and--fair warning to the fascinated!--there are dozens more articles available via Google. My own fascination was inspired by an interest in seeing how reviewers found novel ways to describe it as the worst movie of all time, or of our time, or of this year, or of all putatively "evangelical" films.

Readers, TV viewers, and movie-goers in this sub-sector of evangelical Protestantism turn books (etc.) in this field into all-time best-sellers or money-makers. (The original book, Left Behind, on which an earlier movie and the present one are based, led best-seller lists some years ago, and the film is also a re-make.)

Let me also hasten to insert that many evangelical publications have been uneasy with the Rapture approach and that Christianity Today, which has much to say about evangelical Christianity, pronounced the movie, in bold type, not Christian.

If Left Behind is as bad as the range of reviewers agree, why train Sightings' lens on it? Why invite readers to leave behind their early-week engagements to join the tracking of reviews? Because, I will argue, it poses issues for publics and reviewers who may be "merely secular" and also for Christians who are not of the Raptural camp.

Issues? When movies with biblical or Christian themes (e.g., the recent Noah) get panned, one hears instant charges that they are regarded as bad simply because they treat such themes. More "because:" because the public media is hostile to Christianity and any faith, and will smash any effort to represent faith to general readerships and audiences.

Admittedly, there is a great deal of reflexive panning of faith in films and public media. Also, admittedly, some of these dismissals of religion are simply uninformed or marked by prejudice. But when Christian pastors send flocks to build up box office yields for bad products that look "evangelical," they do nothing to enhance and exalt the faith, which has been the subject of much great literature through the ages.

Reinhold Niebuhr once wrote that there was a difference between being a "fool for Christ" and a "damn fool." Noted theologian Robert McAfee Brown once used this Niebuhr quote in an article which a momentarily-employed Christian Century proof reader of delicate sensibilities, without consulting him, changed to "plain fool."

Niebuhr's and Brown's distinctions deserve to be remembered when something really bad esthetically is served up by a damn fool to a plain fool public as if it is an asset to belief and believers' communities.

It is not possible to prevent writers, film-makers or TV producers from exploiting people of faith, nor is it possible to silence critics. It is possible, however, for people of faith to support serious and esthetically rich narratives and films, and to help the larger public know that they really know that not everything posed as Christian is Christian.

Evangelicalism Religion End of the World Apocalypse Left Behind